The famed matchmaking event is back and better than ever

Over the past few months, SCO's very own cupids reignited LoveSCOpe, SCO's student match-making service, after a several-year hiatus. Equipped with flyers advertising LoveSCOpe and a Google Form with a survey to determine dating compatibility, the team encouraged dozens of Blazers to fill out the LoveSCOpe form in search of a lucky match with one of their peers.

Many Blazers found themselves signing up for fun without the intent of finding a partner. Despite the playfulness in many of the form responses, SCO's matchmakers worked with what they had to create compatible matches.

After much thought and deliberation, the LoveSCOpe cupids created two pairs, both senior couples and close in age. The only step left was to send them off on a date set up by SCO.

Before the date, SCO's LoveSCOpe team was busy at work decorating their designated room, preparing it diligently for their future pairs. Once the couples met, they went out on a scavenger hunt to help break the ice. The two pairs scoured the halls of Blair for various clues held by volunteer SCO members.

After the couples completed their assigned tasks, they regrouped at the final destination: a Blair classroom decorated with streamers and other "lovely" items. There, the matches could enjoy a sweet snack while continuing their conversations.

Despite knowing that seniors Omar Sacko and Amelia Holton shared a number of compatibilities, there was one crucial detail our SCO cupids missed: Omar and Amelia had already known each other for almost eight years. On their trek around the Blair campus, the two caught up while focusing on the task at hand. “It was definitely a workout, but it was fun catching up [with Omar],” Amelia commented.

Despite the great time the two had, they left with the same friendship they arrived with. “I definitely wouldn’t call it a reconnection; we’re still just friends. I’ll say ‘hello’ when I see him in the halls and that’s about it,” Amelia said.

The date didn’t have the most ideal result, but both seemed to have a good time. “It was a good opportunity to try something new and meet new people,” Omar said. 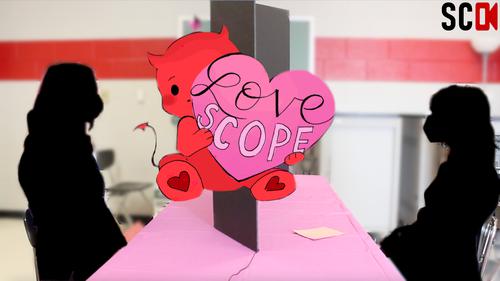 Photo: The LoveSCOpe pair is ready to meet!

Photo: The LoveSCOpe pair is ready to meet! Photo courtesy of Emma Weinstein.

Seniors Alice O'Neal-Freeman and Sofia Roehrig were the second pair of LoveSCOpe matches. Like Omar and Amelia, our matchmakers were able to pick up on connections from the past. “It was nice to reconnect with her for some time because we used to be friends in middle school,” Alice said.

For Sofia, the food provided by the LoveSCOpe team during the date was a highlight. However, the reward was an even bigger plus. "I really appreciated the tickets to the dance," Sofia said.

In fact, Alice and Sofia went to the Spring Fling together and have continued to hang out in the weeks following the date.

SCO is thrilled to have made a successful match between Alice and Sofia. Our next LoveSCOpe session will begin soon, so be on the lookout to see how our next matches turn out! Be sure to check out the video to see more about how the date went!

Kathereen Yang. hi! My name is Kathereen and I'm a junior writer. I enjoy reading and running, and I'm currently trying to figure out how to make pizza (without burning it). More »