Lucas serves up one awesome plate of "Revenge"

When I went to see "Star Wars: Episode III- Revenge of the Sith," I was filled with questions and expectations. How does Anakin turn to the dark side? What will happen to the Jedi Knights? Why does Obi-Wan end up on Tatooine? Will Yoda have another awesome duel? There is so much to expect from the final installment to the "Star Wars" franchise, and I, like so many other fans, prepared myself for disappointment. It is going to take a lot of magic, I thought, to complete the new trilogy.

Lucas's devoted fans accused Lucas for messing up "Episode I- The Phantom Menace" and "Episode II- Attack of the Clones" and cried betrayal. Despite all of his shortcomings and mistakes in his series, creator George Lucas still remains one of the most influential and imaginative creators in the modern movie-making industry. He has let hundreds of thousands dream of a magical world far, far away. And in "Revenge of the Sith," Lucas returns to his world to finish the intricately developed tale of "Star Wars" in all the right, satisfying ways. 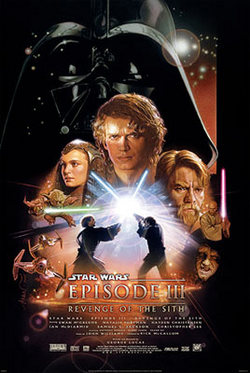 Photo:
Satisfying is hardly the word to describe all the goodies Lucas packed into his final epic, "Sith." One scene, for example, had the troll-like Yoda fighting against the twisted, hooded Darth Sidious. For non-"Star Wars" fans, Yoda's nimble acrobatics and telekinesis were enough to elicit oohs and ahs. "Mess him up, Yoda!" audience members would shout as Darth Sidious and Yoda ascended the cavernous Galactic Senate wielding red and green lightsabers and blasting each other with the Force or blue lightning.

Lucas knows how to treat his fans to lush worlds and fulfilling plot. For devoted, raised-from-the-crib "Star Wars" fans, the fierce battle between Yoda and Darth Sidious had them salivating. Finally, two of the most revered and powerful characters in the Star Wars universe duke it out. Lucas manages to take the authenticity and magic he abandoned in "Clones" and "Phantom Menace" and fill "Sith" to the brim with it.

As the story goes, how Anakin turns to the dark side, etc., Lucas ties all loose ends together in one tense, action-packed knot. I will not reveal any spoilers for the fans out there, but fans can be sure to come out of the theatre satisfied by Lucas's ending.

For the background to Lucas' story, John Williams returns to create the soundtrack. Together with the help of some good sound editing, Williams's orchestra heightens every battle scene. Each smash of light sabers is underscored by Williams's fast-paced and moving musical numbers, wonderfully synchronized. Lucas's epic battle scenes would certainly loose a lot of vigor and heart without Williams's scores. But one can only expect brilliance from Williams, who not only composed the themes of every "Star Wars" to date, but also the classic themes of "Jurassic Park," "Jaws" and "Harry Potter."

While magic thrives in the story and music of "Sith," the acting could not conjure enough to pull a rabbit out of a hat. Hayden Christensen, as the young Anakin who turns to the dark side, fails to grow into his character. He has not changed much since "Clones"; Christensen's acting is still moderate at best.

Compare Christensen with Mark Hamill (the male lead of the older trilogy) and a pattern emerges; both are acting amateurs. Lucas is not a fool for using a young, inexperienced actor twice, though. He knows the audience will overlook his male leads' imperfections because they are too busy engrossed in lightsaber duels, gorgeous extraterrestrial worlds and epic battles. Lucas also elicits an endearing performance from the amateurs, who can at least use their uneasiness and confusion to fuel their roles as maturing characters.

On the other hand, it is unfair to compare the two trilogies. Hayden Christensen and Natalie Portman's performance as lovers Anakin and Princess Padmé is not Harrison Ford and Carrie Fisher's passionate love affair as Han Solo and Princess Leia. The biggest problem facing "Star Wars" today is an audience who expects too much.

There has been a huge weight on Lucas' shoulders to finish the epic saga with a bang since "Attack of the Clones," and it is safe to say that he did. Lucas's powerful ability to immerse an entire population, which spans several decades, of audience members into his own fantastic world is staggering.

It took a Death Star full of magic to conjure such a vivid universe in "Sith." For all his hard work, Lucas proves he still has the "Star Wars" magic in him.