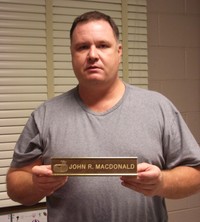 Macdonald's devotion to Blair and his love for teaching has allowed him to realize true happiness as a health instructor and varsity baseball coach.

In high school, Macdonald played baseball, and he learned a great deal about the game of baseball from his coach Hank Mallory. "[Mallory taught me] that you could be a fair person and nice person, and [you could] still care about the kids and coach. A lot of coaches will win at all costs. He taught me that the most important thing was to play by the rules," said Macdonald.

He has always had a strong love for baseball. "Ever since I was a little kid, [baseball] was always the funnest thing for me to do. Baseball was always important to me," said Macdonald.

He played baseball at Montgomery College, but he also attended the University of Maryland. He amended his life long dream of playing baseball and decided to major in journalism and public relations. "I think by the time I was 20 years old I realized I wasn't going to be a professional baseball player. I figured if I wasn't going to be able to play the game professionally, then maybe I could remain close to the game by writing about it," Macdonald explained.

At first, Macdonald had no intention to become a teacher. "My degree is in journalism and public relations. I started coaching JV [baseball at Blair]. I realized then that maybe teaching something would have been better than being a journalist," said Macdonald.

He then switched his major to teaching. To speed up the process of becoming a teacher he attended Bowie State, where he was able to earn his teaching certificate quicker.

His heart is with coaching and the money does not even matter to him. "I would coach [baseball] for free," MacDonald said whole-heartedly.

Macdonald said that he is ecstatic that his coaching has brought Blair baseball from the bottom of the county to the one of the top competitors in the county. "There were a few years, 1983 to 1990, where Blair baseball was considered worst in the county. In those last 13 years we have risen to a level of respectability and I'm proud of that."

He is glad that he gave so much to a school that he loves so much. According to Mr. Macdonald, teaching is what he was born to do. "I can't picture myself doing anything else successfully," said Macdonald.