"Madagascar 3: Europe's Most Wanted": the third time really is a charm

For those who only saw the preview of "Madagascar 3: Europe's Most Wanted" and thought it was just going to be another children's movie, think again. In reality, the previews did not do the movie justice as the film's many humorous moments are surprisingly quite the opposite of the typical juvenile comedy.

For all the parents dreading to take their children to another dumb kid's movie, have no fear. "Madagascar 3: Europe's Most Wanted" has a well-balanced mixture of jokes, some edging on the side of crude so that both kids who would not understand them and their parents can enjoy the movie. In addition, the movie's well-known cast comprised of many comedians, such as Chris Rock or Sacha Baron Cohen, creates a more enjoyably mature movie without being too inappropriate for the children. 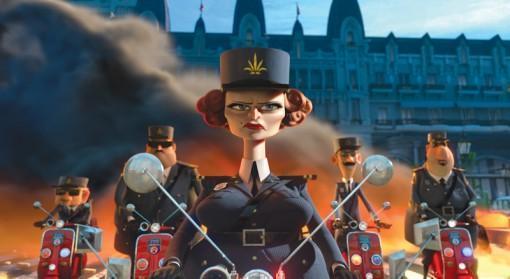 Photo: The evil Captain Chantel DuBois (Frances McDormand) follows the animals and hunts them down across the world.

Photo: The evil Captain Chantel DuBois (Frances McDormand) follows the animals and hunts them down across the world. Photo courtesy of Animation Magazine.

3D effects in most movies are sadly used as a gimmicky ploy to rake in more money, and usually it is only the text in the title screen and ending credits that seem to be popping out. Surprisingly, the 3D in "Madagascar 3: Europe's Most Wanted" is used differently and makes the movie's visual aspects spectacular to look at. When Alex, the lion, jumps out at the audience to roar, one could see every hair follicle coming together to create his mane. Characters who are talking on the screen appear as if they were in the theater chatting with the audience. While characters throw possessions through the air in the movie, before they reach their destination they approach the audience first.

In addition, the movie's stellar soundtrack really ties the movie together. Well-known songs such as "Firework" by Katy Perry, "Wannabe" by The Spice Girls and of course "I Like To Move It" by Crazy Frog help make this a joyful – almost sing-along-worthy – movie.

"Madagascar 3: Europe's Most Wanted," well-rounded in its assortment of humor, amazing visual features and great music, is a must-see for the whole family. Go out and see it in 3D on the big screen before it is too late.

"Madagascar 3: Europe's Most Wanted" (94 minutes) is rated PG for some mild action and rude humor. Now playing in theaters everywhere and also available in 3D.