As Friday night drew to a close, Magnet seniors belted out "In the Magnet, the mighty Magnet, no one sleeps tonight," to the tune of the Disney classic "The Lion Sleeps Tonight." Chants of "One two! One two! One two!" followed, as senior Magnet students participated in the Magnet tradition. Whoever said that math and art don't go together was sadly mistaken. The 23rd annual Magnet Arts Night, put on by students in Blair's Math and Science Magnet program, proved otherwise.

A spirited crowd of students, parents and siblings filled the Blair auditorium in anticipation of the night's events. This year's Magnet Arts Night featured Chinese yo-yo, a magic show and everything in between. 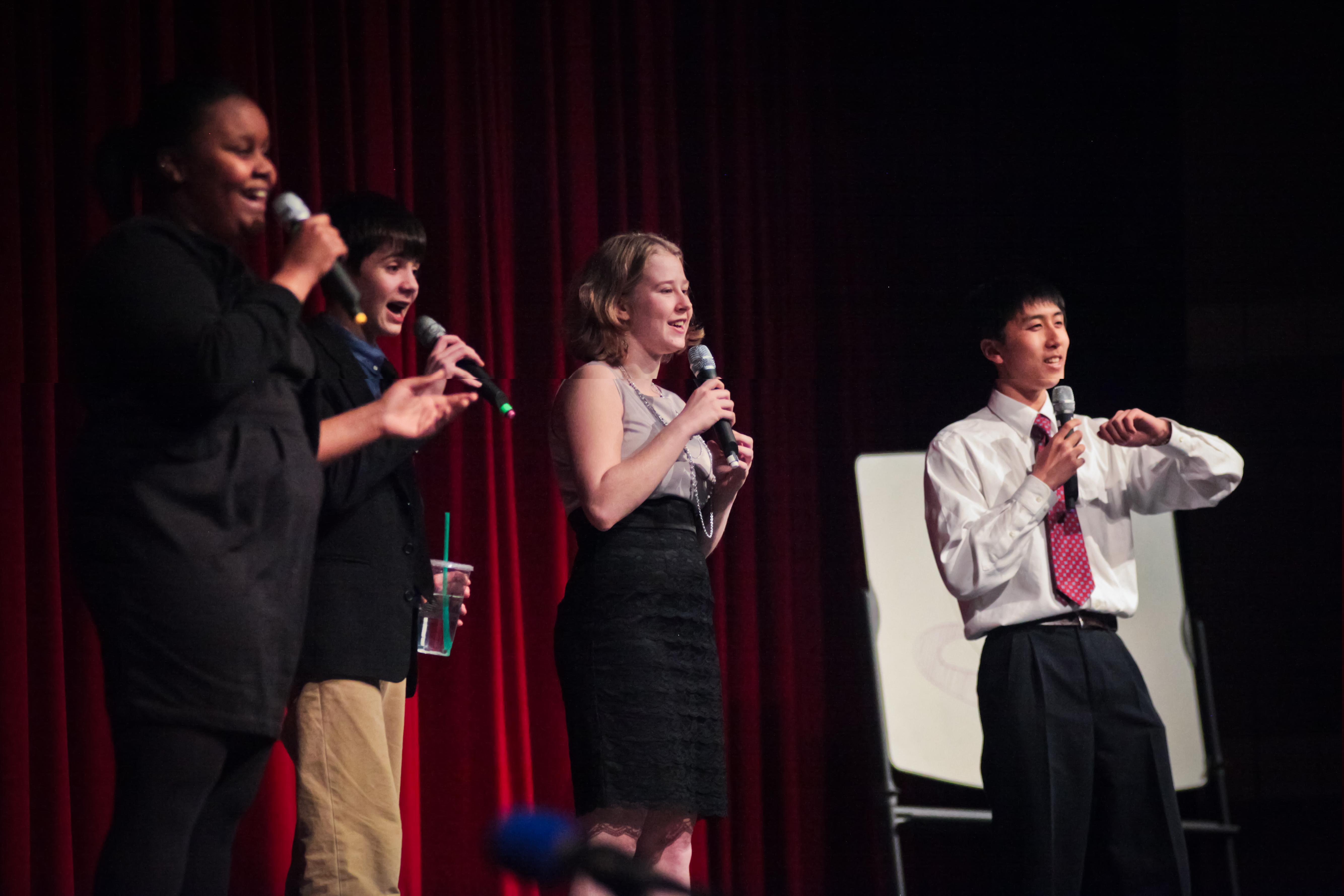 The four masters of ceremony, junior Elizabeth Billings, freshman Ben Holland, senior Andrew Lu and senior Alice Mukora, made their first appearance after the first three acts with several – dare I say – "punny" jokes. The emcees introduced the upcoming acts and humorously drew a magnet and called it art.

The show's 14 acts were divided by an intermission in which audience members could enjoy an art show outside the auditorium. The art show featured visual art pieces created by Magnet students as well as two large boards titled "You Know You're a Magnet When…" on which Magnet students posted their responses, which included complicated math problems and anecdotes about Magnet life.

The best parts of the show, however, were its performances.

The evening started out with a graceful performance of Brahms' "Symphony No. 4 in E minor, Opus 98 (Allegro giocoso)" on the piano by senior Jerome Glick. Glick's poise and confidence on stage brought new depth to the already inspiring piece. Junior Matt Du also played a unique version of "Fugue and Medley in B# Minor," interspersed with theme songs from video games, "Harry Potter" and "Star Wars." The contrast between serious and light scores received many laughs. 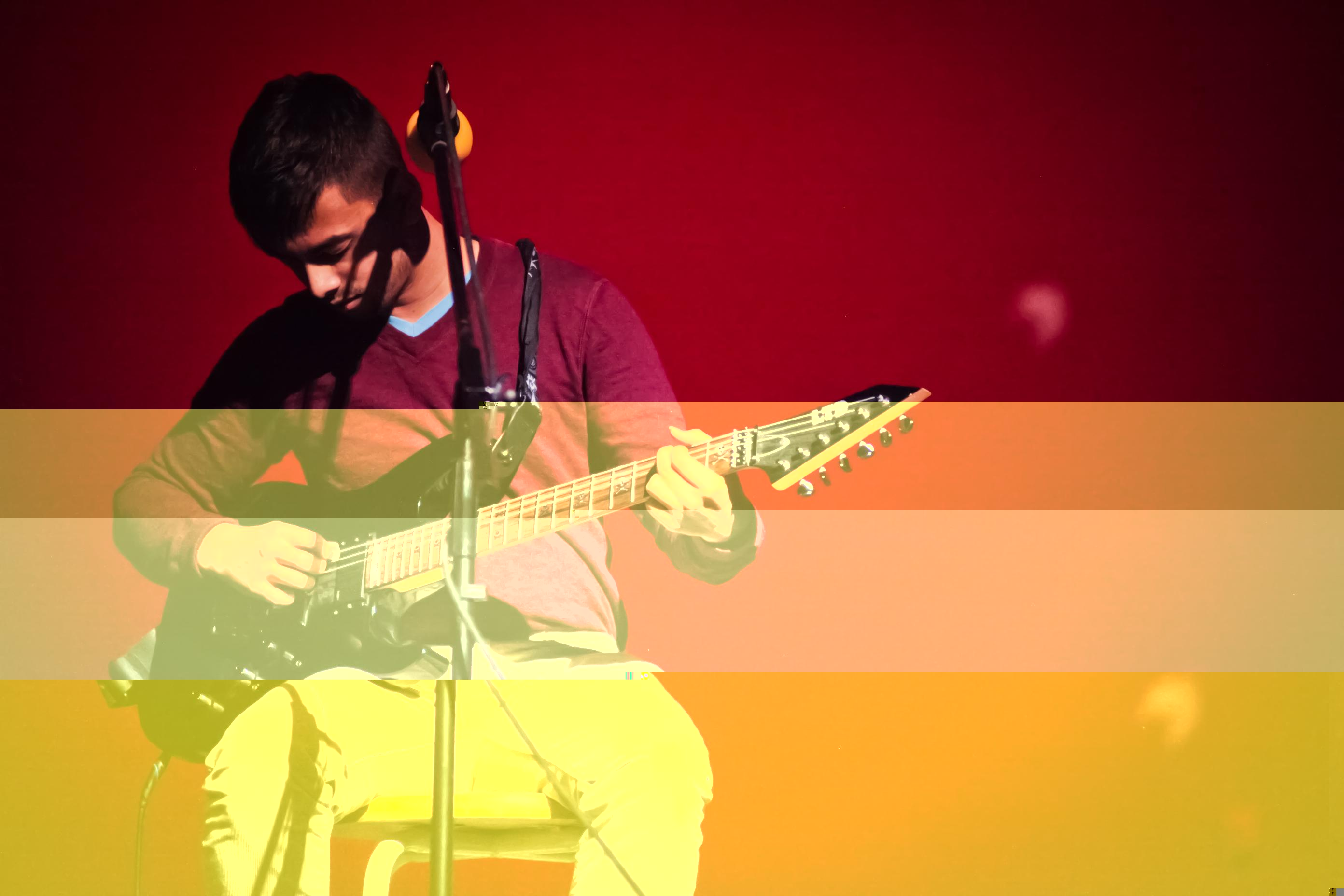 Photo: Senior Sid Nanda plays guitar during the cover of Pink Floyd's "Wish You Were Here."

Photo: Senior Sid Nanda plays guitar during the cover of Pink Floyd's "Wish You Were Here."

Student band "Cobalt University" performed a song called "Fie! The Intro!" Complete with a color-changing background, seniors keytarist Ittai Baum and drummer Gabe Koempel rocked out to their original piece. The duo reappeared in Act II, along with seniors Billy Kimmel, Sid Nanda and Nathan Ng, for a spirited rendition of Pink Floyd's "Wish You Were Here." A disco ball bounced light off the walls and a hidden smoke machine added to the performance's lively and psychedelic effect.

This year's student directors also put a new spin on the 23-year-old tradition by setting up a "coffee-shop" on stage and combining three singing acts into one. Sophomore Nadia Batkhan led the groups with a haunting rendition of "Hallelujah" by Jeff Buckley, inspiring audience members to take out their cell phones and wave them in unison. Appropriately relevant to the upcoming Grammys Awards, sophomores Shaun Datta and Lenny Dong performed Amy Winehouse's "Valerie," with Datta singing and Dong on the guitar. Wrapping up Act I was a jazzy rendition of A.J. Rafael's "She Was Mine," performed in perfect harmony by seniors Enoch Hsiao, Michael Strautmanis and Libby Wei.

Blair's acapella group, InToneNation, opened Act II. Since each performing group had to be composed of at least half Magnet students, only 10 of the 16 InToneNation members performed, changing the group's dynamic. Despite the change in size, the group managed to perform a delightful arrangement of "Mercy" by Duffy. 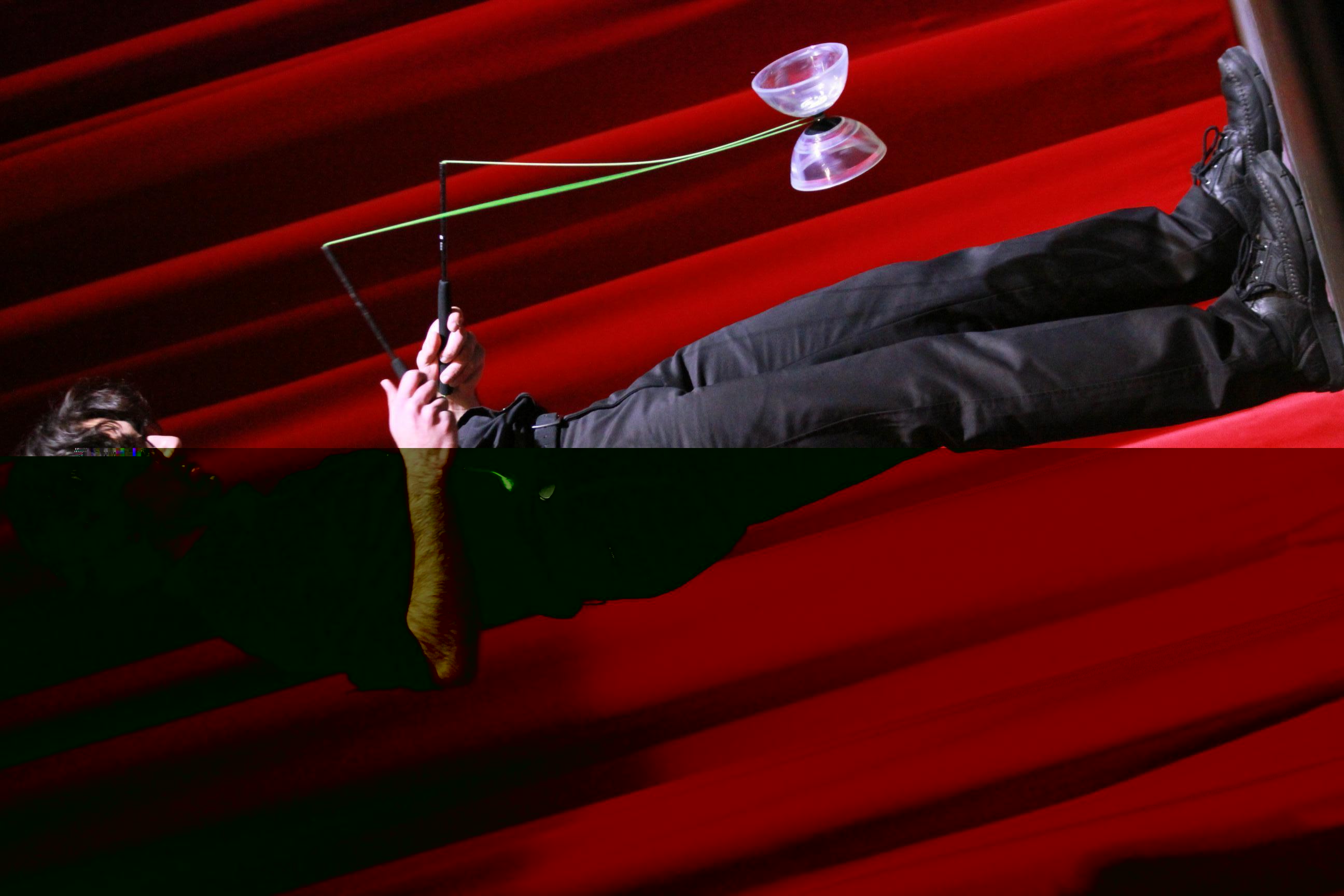 Seniors Kevin Chiang, Lorenzo Choudhary-Smith and Enoch Hsiao graced the stage with their impressive and awe-inspiring Diabolo act. As if throwing and catching the Chinese yo-yo in the air wasn't remarkable enough, the trio had several different parts of their act, each one receiving more "oohs" and "aahs" than the last. A broken Diabolo string early on did not faze the group; they simply picked up a spare yo-yo and continued onto their next section: Diabolo in the dark. The three twirled, tossed and traded their yo-yos in the dark; the colorful yo-yos were the only visible objects on stage. This entertaining spectacle was a crowd-pleaser, as were their solo tricks, such as the "half spaghetti," the "trapeze release" and the "lady killer," among others. The finale of the Diablo act was a toss and catch across the entire stage, which left the audience awe-struck.

In another original act, senior magicians Andrew Hu and Caitlin Leksana put on a humorous magic show that featured Magnet teacher - and willing volunteer - James Schafer. Hu and Leksana used a "Satellite Hat MK 6000" to send "mental energy" signals to read Schafer's mind. The preformers took their act beyond simple magic by incorporating a knock-knock joke and card tricks, which entertained the audience.

Displaying a different type of art, Goldbloom-Helzner also performed a contemporary dance to Christina Perri's song "Arms." Beautifully choreographed, the dance was perfectly paired with the song to evoke a powerful emotional connection.

SSM Indian Dance, a 10 student Indian group, went for a different dance style and performed a traditional Indian piece. Their attire stood out almost as much as their dancing, with the girls clad in intricate Indian dresses and the boys in simple white cotton pants and tunics. 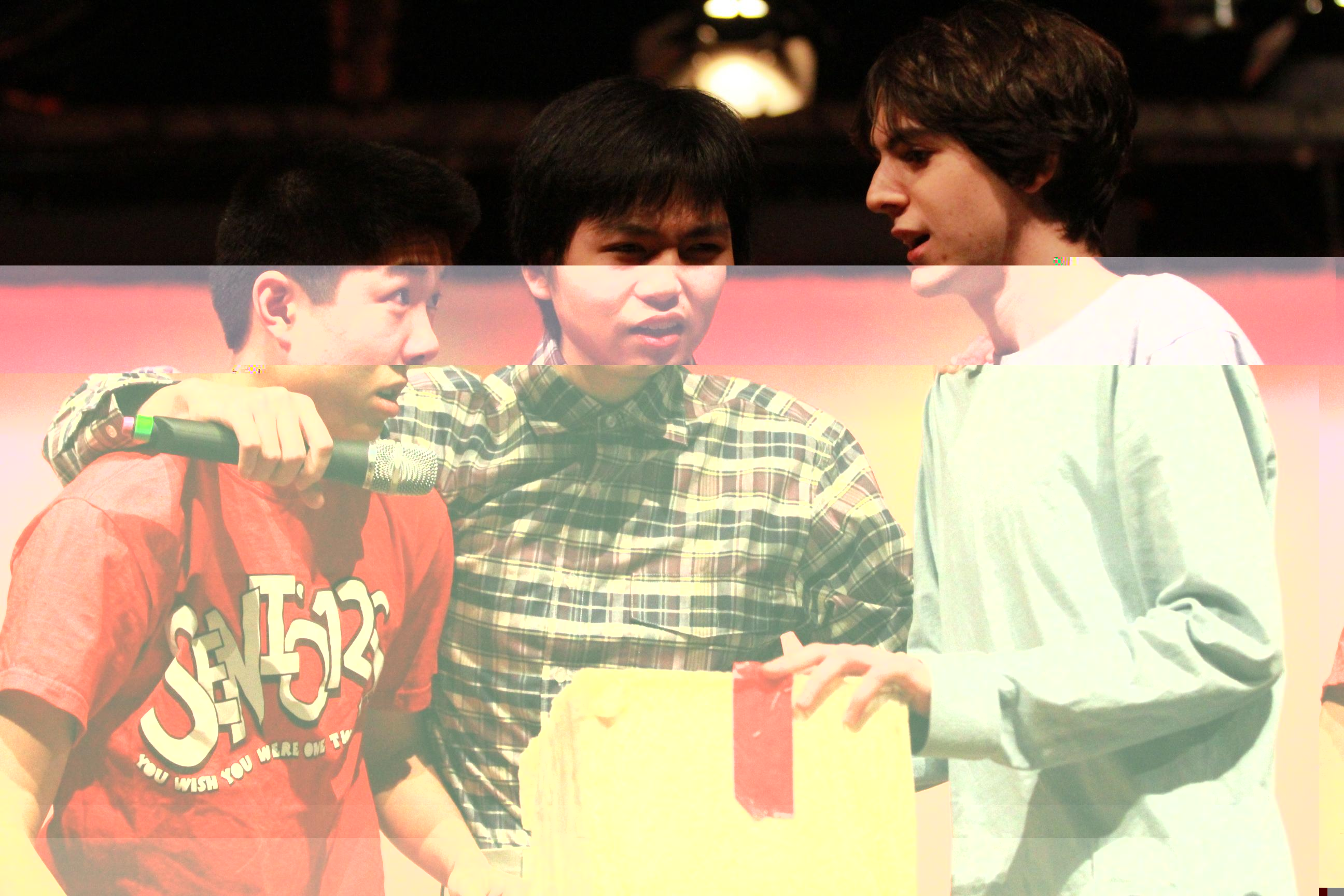 Photo: Each year, the Magnet seniors take the time to poke a little fun at their teachers. Here, Nathan Ng is imitating chemistry teacher Tran Pham.

Photo: Each year, the Magnet seniors take the time to poke a little fun at their teachers. Here, Nathan Ng is imitating chemistry teacher Tran Pham.

As part of an annual tradition, the senior Magnet class performed an amusing skit about their time in the program. This year's senior act featured Chunwoo Baik as himself, Michelle Dagne as Baik's younger self, and Andrew Lu as the "ghost of Magnet's past." The class took Dagne through the defining points of each year, including the sophomore year Wallops Island trip and the pinnacle junior year internship.

After the group finished their skit, all Magnet seniors were the invited onto the stage to perform their song, ending the evening with a 23-year-old tradition that will be carried on for many more. As the senior class showed their spirit, other classes erupted in cheers of "One five! One four! One three!" creating a chorus of friendly class rivalry and Magnet pride that is sure to last for years to come.