Schools closed; motorists rescued from flood and treated for hypothermia

This is not original reporting. All information has been compiled from the Washington Post and the Associated Press. Silver Chips Online posts this news summary to provide readers with a forum for discussion.

A large water main broke on River Road in Bethesda at 8 a.m. yesterday, stranding about 15 people in water more than four feet deep. The Montgomery County Fire and Rescue Service (MCFRS) sent helicopters to rescue the motorists, many of whom were treated for hypothermia and other minor injuries at local hospitals. 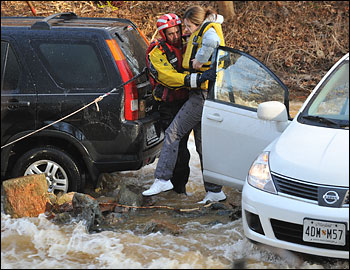 Photo: A rescue official helps a woman stranded in her car amidst high water at River Road in Bethesda. The flood was caused by a water main break. Picture courtesy of The Washington Post.

Photo: A rescue official helps a woman stranded in her car amidst high water at River Road in Bethesda. The flood was caused by a water main break. Picture courtesy of The Washington Post.

Large pavement chunks, boulders and other debris made it difficult for rescuers to reach stranded motorists in the raging waters, which surged at a rate of 150,000 gallons per minute at its peak. Boats and several helicopters enabled MCFRS officials to make the final rescues by 9:30 a.m. and transport the remaining victims to the hospital. Utility workers from the Washington Suburban Sanitary Commission (WSSC) cut the supply of water from the Potomac Filtration Plant to restrict water flow to the pipe and closed two valves to isolate the break.

Montgomery County Public Schools (MCPS) closed schools two and a half hours early Tuesday due to low water pressure and heat outages in 13 county schools; students were released to winter break at noon. Bethesda, Carderock Springs, Chevy Chase, Glenhaven, Potomac, Somerset, Wood Acres and Wyngate Elementary Schools had little or no water pressure, along with Thomas Pyle Middle School and Bethesda-Chevy Chase, Churchill, Walt Whitman and Walter Johnson High Schools. MCPS officials canceled evening athletic activities in all county schools, but community use activities will be held as scheduled except for those at the 13 schools affected by the water main break.

The water main break also caused hundreds of power outages and reduced water pressure in other buildings throughout southern Montgomery County, forcing many local businesses to close. Utility workers have since restored water service to local customers, but the section of River Road between Seven Locks Road and Bradley Boulevard will remain closed and may take several days to repair.

Officials from the WSSC have not yet determined the cause of the break in the pipeline, but some speculate that the condition of the aging pipe and cold weather played a role in the rupture.

The conditions of county pipes continue to deteriorate as ground water and acidic soil wear away at aging pipelines, according to "The Washington Post." A study conducted by the Maryland Tax Education Foundation (MTEF) after a June 2008 water main break found that many miles of WSSC's water and sewer pipes need to be replaced. Despite a record 2,129 pipe ruptures last year, Montgomery and Prince George's County representatives voted in February of 2008 not to charge an extra $20 per month for water services to fund more extensive pipe replacements. Officials were concerned that cost increases would pose too much of a burden to low-income customers.

The WSSC, the MCFRS and MCPS could not be reached for comment.