One Blazer makes his way into the musical world

Senior Ernie Slenkovich takes a deep breath as the lights beams down on stage, bouncing shards of light off the brass cymbals and obstructing his view of the screaming crowd only feet away. With steady hands he lifts his drumsticks, gives three taps and leads his band into an eruption of passionate sound. 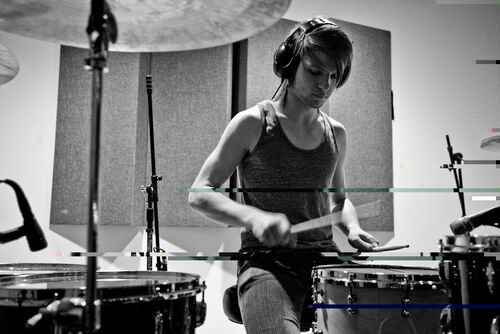 Photo: Slenkovich, who showed an interest in music at a young age, is pursuing a career as a musician.

Photo: Slenkovich, who showed an interest in music at a young age, is pursuing a career as a musician.

Slenkovich's whole life has revolved around music, particularly percussion. After he graduates this June, Slenkovich plans to tour with the band he joined his sophomore year, Commends, and work his way towards signing with a record label. Slenkovich began playing for Blair's marching band at the age of 11, and from competing in finals of drum-off competitions to writing his own material, Slenkovich is on his way to creating a name for himself in the music industry.

Slenkovich grew up in a tremendously musical home. "There was always music playing in the car or at home that I would tap along rhythms to," he says of his childhood. Though starting out his music career banging on kitchenware, he quickly graduated past the spoon-drumsticks to a toy drum kit, and finally to private drumming lessons.

Slenkovich's older brothers Johnny and Lenny provided much of the inspiration and motivation for Ernie's musical exploration at such a young age. All three boys were simultaneously learning to play instruments, and often did so together. "We were all young and it encouraged practice," Lenny says.

When he was middle school, Ernie and his brothers created a band called Undergone with several of their friends. Later, branching into another band called Jema, they took on a heavier approach to both their style and performance of music. "We took the music scene and gigs more seriously, as well as taking the music to more challenging level," Johnny says.

Learning by (and without) the book 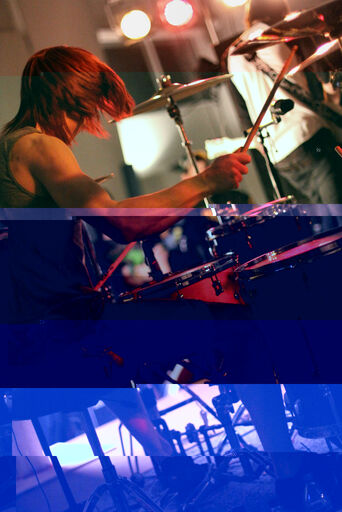 Photo: Instead of attending college in the fall, Slenkovich will be touring with Commends.

Photo: Instead of attending college in the fall, Slenkovich will be touring with Commends.

When he was in sixth grade at Silver Spring International Middle School, Slenkovich was invited by former music teacher Dustin Doyle to play in Blair's drum line of the marching band. Though intimidated at first, he was welcomed into the band and given a nickname - "little man" - as well as new opportunities in which he could grow as a musician. "I learned a lot from my elders at the time and improved a lot of my rudimental and music reading skills," Slenkovich says.

Slenkovich played with the marching band for four consecutive seasons until his sophomore year at Blair. Throughout high school he also participated in the Blair Honors Jazz Ensemble, Guitar Ensemble and took a music tech class. By learning music in a formal environment, the drummer was able to gather the skills necessary to create music on his own.

Slenkovich, who has his own basement-recording studio, spends hours writing and recording both covers of other artists' works as well as his own songs. One day may be spent tracking drums, another laying down guitar tracks and the next recording all of the vocals. "Just hearing the sound of all the instruments coming together sends chills down my spine," he says. Johnny notes that Ernie's song-writing ability is particularly unique. "He loves to try to incorporate highly complex rhythms into the songs," Johnny says, "and his ideas have always been very catchy and impressive."

Slenkovich has also grown greatly as a musician since playing joining Commends and has become good friends with many people with experience in the music industry. "It is such an advantage to know people like these. You can learn a lot from them," he says. One such experience that Slenkovich is looking forward is taking lessons taught by Aaron Gillespie, drummer and singer of the popular metalcore band, Underoath. "Without a doubt, he is definitely my favorite drummer," Slenkovich says.

Kicking off the future

Slenkovich applied and was accepted to study recording arts at Full Sail University in Florida next fall, but decided to focus on his career with Commends, which has already recorded its first EP. Slenkovich has no regrets turning down university, as he's sure that sticking with his band will be promising. "Being in a band has opened many doors that have allowed me to expand my drumming career," Slenkovich says. 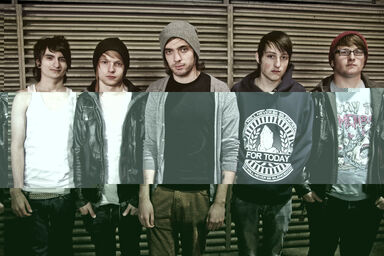 Photo: Ernie joined Commends in 2008, during his sophomore year at Blair

Photo: Ernie joined Commends in 2008, during his sophomore year at Blair

As his path in music grows, Slenkovich has brought in many of his other interests such as photography and graphic design. He recently started his own clothing company, Beloved Clothing, which delivers positive messages through its designs. Despite being separate from his band, this business will remain convergent with Slenkovich's musical career. "I'll be endorsing two signed bands that will help promote the company to all of their fans," he says.

Slenkovich also posts many of his recordings on his own Youtube channel, where he can share his music with other musicians and fans. "It's great because I get amazing feedback on my playing and surprisingly a lot of views," he says.

Lenny has great confidence for Ernie and his talent. "I hope this is still just the beginning," he says. As for Ernie, he has no end in sight. Whether he becomes a jazz drummer, studio artist or rock star, he knows that whatever he does will come with drumsticks. "Playing drums and being around music is something I want to do forever," he says.