Juniors Sam Barth, Greg Friedman, Peter Myers, Russell Ottalini and Joe Gilbert emerge on-stage to enthusiastic applause, ready to spread Christmas cheer in this year's SGR Spectacular. While they set up, it becomes apparent that the boys are not equipped with any musical instruments or even microphones. And as the Christmas song "Santa Claus is Comin' to Town" begins playing in the background, "pianist" Ottalini emphatically mimes the action and other group members begin imitating other instruments. These boys are in an air band, known as "Action Jackson and the Go Getters." 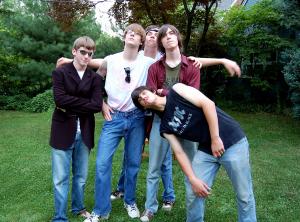 Photo: The band boys smile for a group picture.

Photo: The band boys smile for a group picture.


Usually composed of two or more people, an air band features members simulating instrumentation synchronized to the original recording of a song. Although the boys deviate from traditional forms of musical entertainment, they have performed at 10 different venues and their informal act has begun receiving paid gigs and a positive response from the Blair community.

A history in the making

The band formed in April of 2007, after Barth decided that he wanted to do something original for the May SGR Spectacular. Barth believes that the air band idea was not a spontaneous thought but one that had been brewing subconsciously. "It had been building in my mind for a while," he says. "I decided to manifest my dream into something we can actually try."

Without missing a beat, Barth asked Myers and Friedman whether they would help him turn his musical vision into reality. His proposition was greeted with enthusiasm. "This is awesome," Friedman remembers thinking. "This is the best idea ever."

With Barth already the lead singer, Friedman claimed the position of lead guitarist and Myers assumed the role of drummer/percussionist. The hard part became finding a pianist and bassist. After enduring strenuous auditions and unenergetic candidates, the band finally found bassist Gilbert and pianist Ottalini. With the Spectacular just weeks away, the boys scurried around for practice time, air banding whenever they had a chance. "We even skipped class to practice once," Ottalini says with a hint of a smile.

But one crucial detail remained - the group needed a name. Inspired by 1950s bands with names such as Bill Haley and The Comets and an episode of "The Simpsons," Myers pitched Action Jackson and the Go Getters. The name clicked with the rest of the members; they were finally ready for the Spectacular.

Playing "Don't Stop Believin'" by Journey, their first and only choice for the show, the Go Getters did not anticipate the audience's overly enthusiastic reaction. "We had no idea we would be such a big hit," Gilbert says. "We thought we'd just go out there and get a few laughs. But people really got into it; they started [waving their arms] and clapping." 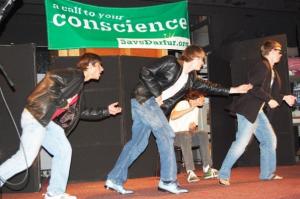 Photo: The band rocks out at the "Dinner for Darfur." Photo courtesy of Action Jackson and the Go-Getters.

Photo: The band rocks out at the "Dinner for Darfur." Photo courtesy of Action Jackson and the Go-Getters.

After that fateful first gig, Action Jackson and the Go Getters started receiving requests from supporters to perform at various parties ranging from charity events, such as senior Ben Simon's Dinner for Darfur on Sept. 15, to simple get-togethers. Practically every gig was akin to their first performance - full of cheering supporters and singing voices.

With their reputation on the rise, the Go Getters are even beginning to get paid and received their first paycheck from a bar mitzvah for a boy whose parents heard about the band by word of mouth. "We're getting 100 bucks [total]," Barth says. "We hope that other people [enjoy] us at the bar mitzvah and that they would pay us to play at their kids' bar mitzvahs."

The boys attribute their popularity to their own appreciation for the music, which they communicate to the audience. "The reason why we're so popular and why there's such energy is because every single one of us enjoys it," Friedman says.

But the Go Getters aren't just about enthusiasm – just like every other band, they need to practice. Comparing his band to videos of other air bands on the internet, Ottalini believes the Go Getters to be superior because "we actually make an attempt to make it look real." Friedman, who knows how to play the real guitar, looks up the guitar tablature of their chosen songs on the internet and, during practice sessions, shows Gilbert which notes to play so the two look like they are playing in unison.

Once solo performances are polished, the group practices previously performed songs together, constantly honing their ability to mime their respective instruments. The band also discusses potential songs to play for future programs. "It has to be a song that we can do," Myers says. "Not a song with the right instruments, but a song we can perform well."

When the band figures out which songs to add to their list, they create and practice new choreography and consider costumes. According to Friedman, these special additions allow the Go Getters to "change personas from song to song,"

The band's practice pays off, as they perform a wide range of genres. Aside from "Don't Stop Believin,'" the Go Getters have also performed other classic rock songs such as "Under Pressure" by Queen and "My Generation" by The Who. In July, the band tried the more contemporary "Hate to Say I Told You So" by The Hives at a friend's get-together.

But their most memorable performance came in September, when they performed "Fight For Your Right" by the Beastie Boys, their most experimental song yet, at junior Yelena Johnson's sweet-16 party.

Gilbert feels Johnson's birthday bash was particularly brilliant because of the intense connection the band felt with the audience. "Just the energy in that room, at that time, was so amazing that even if we had screwed up really bad, nobody would have noticed it and it would have still been an awesome performance," he says emphatically.

Aside from the thrill of branching out and embracing a new style, the gig was significant because it was one of the first performances where the audience consisted of people who were unfamiliar with the band. "There were a couple of B-CC kids at that party," Myers says. "When we first started playing, they sort of stood [detached] but then they started jumping around and enjoying it like everyone else. We won over some fans that day."

Johnson, who has seen the Go Getters perform on multiple occasions, was pleased with her choice of entertainment. "The band did a really great job. Everybody had so much fun watching them perform," she says. "The whole idea of the band is so unique, so having them play at my party was cool since it was something different."

Plans for making it big

In light of their constantly growing fan base within Blair, the band has been gaining recognition outside of school as well. "I've had people [from other schools] come up to me and ask, 'Hey, you're from Blair, do you know that you guys have an air band?'" Gilbert says. As a result, the band has begun discussing and implementing strategies to broaden their recognition, trying publicity ploys such as newspaper ads and promotional t-shirts.

Looking even further into the future, the Go Getters would like national attention. Although there is an annual United States Air Guitar Championship, there is no formal national air band competition, as it is still a trend in the making. Nevertheless, the band is interested in such an opportunity. "If one came up, we'd do it," Barth says.

In the meantime, the Go Getters have opted to audition for the NBC hit show "America's Got Talent," which is now accepting online submissions. Although the members doubt they'll advance past the first round, they see no harm in taking a chance.

Regardless of their growing popularity and opportunities, the boys do not forget the original reason why they joined the band: each and every one of them enjoys the freedom and thrill of performing. "Air banding is one of the most adaptive [form of arts]," Ottalini says. "It's like acting with music. We can do anything we want. We can be anybody we want."