The invisible line between catchy and offensive

While this may sound like a shocking promo heard during the evening news to keep viewers tuned in, those in the know will find that the intro does not lead into a story of courage and endurance. It simply describes the performance that Blair's fashion club conducted during the club showcase in the gym on the Wednesday before Thanksgiving break.

In the skit's introduction two female Blazers were pushed and dragged to the center of the room by a group of teenage boys. The two girls were then forced into two chairs where they were "tied" in pantomime. They were rescued by a group of strutting, fashionable, girls who "fought" off the attackers. Directly after their rescue from their assailants the fashion show began. 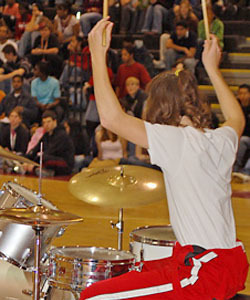 While the introduction of the show may have been a way to catch the audience's attention, many people in the audience felt that the performance alluded to an attempted rape, and that the club crossed a line by introducing their show in such a manner. The pantomime shocked media specialist Lisa Hack, who believed that using rape as a way to catch the audience's attention was inappropriate. "A rape scene shouldn't be the opening act to a celebration of talent," she stated.

She was even more struck that the club seemed comfortable with using an introduction that she said could easily be interpreted as an attempted rape. "People are so used to images of violence in music lyrics, music videos, movies, video games, etcetera, that violence isn't shocking," she said.

Unlike Hack, SGA President Eric Hysen said that the display was in no way meant to suggest a rape. "I'm almost positive that that wasn't their intention," Hysen said.

Junior Nayane Henriquez, a member of fashion club, says that the performance was meant to illustrate females overcoming various hurdles. While other Blazers concluded that the display was inappropriate, Henriquez disagrees, stating that the club designed the skit while aiming for a positive message. "I thought that they were just trying to do something positive," Henriquez said.

Regardless of the fashion club's intent, be it a display of talent or a display that was demeaning to some, the club made a serious error in conducting a performance that would be offensive to so many.

Though the performance managed to catch Blazers' attention, it was not the kind of attention that anyone should desire. Instead, it raised the question of what is appropriate during a school function that is supposed to be fun, spirit-boosting experience, not something that echoes last week's episode of "Law and Order: Special Victims Unit."