Released on Feb. 5, “Malcolm & Marie” is an inherently risky film. Made in black and white, starring only one actor and one actress, in one location and devoid of special effects, its simplicity is rare in modern Hollywood. Yet, it works. While not perfect, “Malcolm & Marie” offers an interesting look at what makes romantic relationships succeed, and more importantly, what makes them fail. 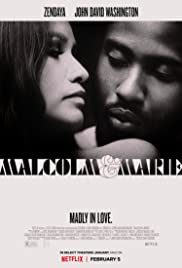 Simply put, “Malcolm & Marie” is a feature-length bottle episode, a television trope where opposing characters are stuck in one location for the entirety of the runtime. The plot focuses on Malcolm (John David Washington, son of Oscar-winner Denzel Washington), an up-and-coming filmmaker and his girlfriend Marie (Zendaya) as they return from the successful premiere of Malcolm’s first big movie. At the premiere, Malcolm mistakenly thanked everyone except Marie. Throughout the film, the pair fight, smoke and eat mac & cheese as they examine their own flaws, pasts and current relationship.

While resembling bottle episodes and stage plays, “Malcolm & Marie” is also reminiscent of a boxing match. Each performer is a fighter, using words to combat one another, with musical interludes breaking up each round. Through this, “Malcolm and Marie” escalates and deescalates conflict. It’s an interesting idea that may offer some realism to the film, but the roller coaster feeling works less well in the second half than in the first. This format eventually tires itself out as the characters sink too deep into the drama, and the film’s simple premise becomes its downfall.

Director and writer Sam Levinson pens a good, but not perfect script. While it focuses primarily on the drama and tension between the two leads, it does a good job bringing out the raw emotion of the characters. For such an intense film, Levinson also adds wonderful moments of levity that help flesh out the leads and their relationship. Levinson also delves into the role of politics in modern filmmaking through Malcolm’s monologues, but not to the point where the film becomes any sort of political statement. It’s slightly confusing for the viewer, as it becomes unclear if the haphazard nature of tossing in the statements is the point of them or not. Levinson choices from behind the camera are also well-done, as he blends close-ups and wide-shot to show the intimacy of their relationship as well as the distance between them

However, the standouts of the film are Washington and Zendaya. In a film as simple as this one, every possible flaw would stand out tremendously, especially when it comes to the acting. However, this isn’t a concern, as the two are phenomenal.

The winner of an entertaining fight is whoever throws the last punch. In “Malcolm & Marie,” the best performer truly is the speaker of the last line. Washington is excellent in every scene. In moments where humor is needed, he brings it effortlessly. His charisma comes through his long-winded monologues while his anger and passion are also palpable when needed.

Simultaneously, Emmy-winner Zendaya continues her domination of the entertainment world with another stunning performance. She showcases her brilliant range, with as much ease acting emotionally unavailable as she is acting emotionally unstable, her deep hurt evident with every line. The chemistry she has with Washington is real and without a doubt what makes this film “work.”

Yes, “Malcolm & Marie” is a flawed success. A challenging premise, but somehow successful due to the stellar performances by Washington and Zendaya. If you have a Netflix account, spare the time and watch the movie.

“Malcolm & Marie” is rated R for pervasive language and sexual content. It is now available to stream on Netflix.