Many people make a career decision right after they earn their college degree. However, there are others, like Anne Manuel, who decided to take chances and pursue adventures before settling down. 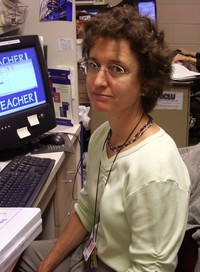 Manuel attended Wesleyan University in Connecticut. "[The university] was a small liberal arts, intellectual atmosphere with a lot of political activism," Manuel says. After graduation, she worked as a human rights socialist for 14 years before deciding to have a family. She would travel to Latin American countries and investigate serious government human rights violations. Her task
was to write reports and present them to a country's congress as well as to the United Nations. Manuel would complete the investigations in order to prove that the government had committed injustices, such as murdering citizens.

She loved the experience despite all the risk involved. "[The investigation] was frightening, but it was more dangerous for the local people working for their rights," Manual says, emphasizing the seriousness of the job. Many of the cases worried her, especially those in which people, who had a job similar to hers, were murdered.

However, she is grateful to have safely traveled to various countries in the world like Nicaragua, Honduras, Costa Rica, Colombia and Peru. Manuel spent time in Great Brittan, Italy, Austria, Yugoslavia, Mexico and Canada, as well.

In 2000, Manuel came to Blair after leaving her previous job. She became a history teacher in order to pursue a different lifestyle. "I wanted to work in a place where I did not travel that much and could still be in touch with Latin
American people," she says contentedly.

Manuel recalls her fear before her first day of teaching. "It was scary to know that I was going to be an Algebra teacher," Manuel laughs. She admits that math is not her best subject and adds that she did not know about homerooms, which only increased her anxiety about teaching at Blair. "By the time some teachers helped me figure out my homeroom class, there was a long line of [students] at my assigned room," Manuel smiles embarrassedly.

If she were not a teacher, Manuel would either be a journalist or continue being a human rights activist. She is passionate about writing as well as about helping others.

Her other hobbies include being outdoors as well as playing and watching soccer and cross-country sports. When some colleagues taunt her about her love of nature, Manuel embraces her weakness. "I literally kiss and hug trees," Manuel states with a big smile.

Manuel is originally from Ohio and especially loves northern Ohio because of the agricultural setting. "The lovely sight across the fields is so warming," Manuel says closing her eyes. Not surprisingly, Manual says if she could be an animal, she would love to be a "horse so I could gallop free as the wind."

All in all, Manuel has no regrets about her accomplishments and her life. "I am grateful I had the opportunity to work as a human right activist and then as a teacher," she says proudly.