Many sound bites but few insights

Last week, Secretary of State Hillary Clinton wrapped up her seven country tour of Africa. She met with national leaders and regular people alike and promised to keep Africa high on the State Department's priority list. She pledged to help victims of rape in eastern Congo and chastised the corruption in Kenyan government. 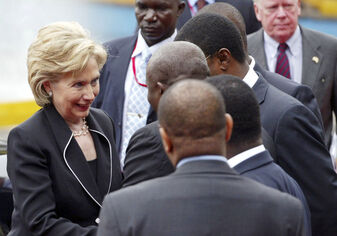 Photo: Secretary of State Hillary Clinton met with leaders in Africa to discuss policy, but her visit was overshadowed by petty sensationalism. Picture courtesy of the Washington Post.

Photo: Secretary of State Hillary Clinton met with leaders in Africa to discuss policy, but her visit was overshadowed by petty sensationalism. Picture courtesy of the Washington Post.

But of the entire tour, the most widely publicized moment was when Clinton lost her temper with a boy who asked what President Obama thought about a trade deal between the Democratic Republic of the Congo and China. The question was mistranslated, and Secretary Clinton thought she was being asked for her husband's opinion on the deal, instead of President Obama's. Clearly annoyed, Clinton replied, "My husband is not Secretary of State, I am. If you want my opinion, I will tell you my opinion. I am not going to be channeling my husband."

The moment was marginally shocking, but it should not have eclipsed the coverage of the rest of her tour. Yet that moment made the news, and then the news discussions that followed. These days, if you want to see sensationalism all you have to do is turn on the television.

The distorted coverage of Clinton's trip to Africa exemplifies the failure of mainstream media to provide what good journalists should hold close: responsible news judgment. When Michael Jackson died in June, footage of his daughter saying goodbye at the memorial service replayed for days, because everyone loved the idea of the King of Pop being a good dad. Meanwhile, what important events occurred unreported? American viewers will never know because they were watching CNN, NBC, FOX or any news channel in the United States. It's true that sensational stories like these get high ratings, but when news channels fail to report important issues, people are left in the dark.

The main problem with the news media is that they fail to inform people about important issues. Instead of explaining the choices before us on health care, they cover rowdy and unproductive town hall meetings with mob-like participants whose ignorance is supported by the mainstream media.

The newspapers and wire services report and explain issues, but as readership of newspapers declines, news channels must rise to higher standards of reporting or Americans will continue to be sadly misinformed.