Many ways to say "Hello"

Blair is home to students from a multitude of different cultures and nationalities. Just as dozens of cultures are represented at Blair, so too are languages, some uncommon and spoken infrequently in the United States and at Blair. Below are a number of profiles of Blazers who speak one or more uncommon language.

Junior Jennifer Fasheun's parents and family members grew up speaking Yoruba, a West-African language spoken by over 22 million speakers. The language is spoken primarily in southwestern Nigeria, Benin and Togo. Fasheun speaks Standard Yoruba, the most common of the language's many dialects. Standard Yoruba is also the written form of the language, used in newspapers and on the radio.

Fasheun, born in the United States, learned the language on her own through her interactions with fluent speakers when she lived in Nigeria. At school in Nigeria, Fasheun says that she was expected to learn several languages important in the region, including English, Yoruba and French.

She says that Yoruba was a difficult language to learn because of the language's many rules. "There are accent marks for certain words and one word can have triple meanings that are totally different," she says.

Fasheun says that Yoruba is her favorite language because it makes her feel unique. "Everyone here speaks English but not everyone speaks Yoruba," she says. 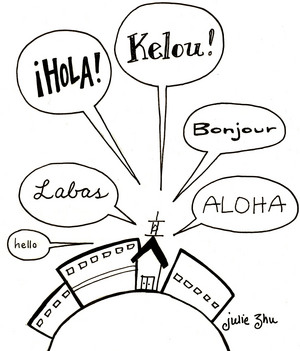 Junior Charles Chikelu speaks Igbo, a Nigerian language. Similar to Yoruba and Chinese, Igbo is a tonal language, meaning the tones used in the language change the meanings of words as much as vowels or consonants change the meaning of words in English. Around 18 million people in south and southeastern Nigeria speak Igbo.

Chikelu speaks a dialect of Igbo native to the Umulumgbe region of southern Nigeria. Chikelu's parents both speak Igbo and he grew up speaking the language.

Chikelu began to learn a version of English when he lived in Nigeria known as "Broke English," a form frequently used in the country. Chikelu says that he learned English passively, picking up on what others around him were saying and reading books to expand his vocabulary.

Chikelu's half-Polish, half-Nigerian cousins also helped him learn English. "Sometimes you can hear the East European accent when I talk," he says.

In addition to Igbo and English, Chikelu also speaks Housa, a Nigerian Arabic dialect, as well as standard Arabic. It took Chikelu two years to become fluent in standard Arabic, building on his knowledge of Housa.

Senior Mantas Vidutis grew up speaking Lithuanian and English in the United States. A second generation Lithuanian, Vidutis's grandparents immigrated to the United States to escape the Soviet takeover of Lithuania during World War II. Both the Lithuanian language, what Vidutis terms the "Americanized" version, and English were passed down to him from his parents.

Lithuanian is one of the only two existing types of Baltic Languages and is spoken primarily in the countries of northeastern Europe, including Lithuania, Latvia, Belarus, Poland and Russia. Lithuanian is the state language of the Republic of Lithuania and has about four million native speakers.

Vidutis prefers Lithuanian to English, although he says that the language, "can get more difficult than English because I am out of practice."

Junior Ruby Johnson speaks Krio, an English-based creole language. About four million Sierra Leoneans speak the language as a second-language and it is native to the Krio ethnic minority, descendents of freed slaves living in Freetown, Sierra Leone's capital, although it is also spoken throughout West Africa.

Johnson grew up speaking Krio, English and Yoruba in Sierra Leone and she still speaks Krio and English fluently although she is out of practice with Yoruba. In Sierra Leone, English is the official language so classes in public schools are conducted in that language.

Johnson's mother and brother speak Krio as well as Yoruba. Johnson and her family lived in Nigeria for two years prior to moving to the United States in 2003 to avoid a civil war that was ravaging Sierra Leone.

At Blair, Johnson is taking French and studying Hindi, a language native to India. She credits Bollywood films for her interest in Hindi. Yoruba and Hindi are her favorite languages and, in the future, she would like to learn Japanese in order to understand the lyrics in Japanese rock songs.

Freshman Dominique Ngongang grew up speaking French in Cameroon and began speaking Bazou at the age of seven. Bazou is a member of the Bamileke branch of Niger-Congo languages widely spoken in West Africa. The most numerous semi-Bantu ethnic group, the Bamileke comprise over 100 different groups that speak 11 different languages or dialects.

When Ngongang was 12, she began studying her father's native language, Danene. Ngongang prefers Bazou over Danene because it is easier for her to speak. The ethnic groups to which Bazou and Denene are native are closely related, making speakers of the two languages able to understand one another.

Junior Kadidiatou Traore, born in the Ivory Coast, is fluent in French but she also speaks her mother's native language, Bambara, and her father's, Fulfulde. Bambara is spoken by members of the Bamana ethnic group who live throughout West Africa and are in the majority in Mali. Members of the Fulani ethnic group speak Fulfulde. The Fulani live across Saharan and Sub-Saharan Africa, from the west coast of Africa as far east as Sudan.

A member of the Manding language-family, Bambara is a tonal language that uses high, medium and low pitches to convey certain messages. When the French occupied West Africa, the French language was mixed with Bambara in urban areas and Bambara speakers took up French words, often suffixing an "i" at the end of the word. For instance, the word for "snow" in Bambara is "neigei" similar to the French word "neige" which is also for snow. Because there is no snow in most of West Africa, Bambara speakers did not have a word for it.

Fulfulde is a member of the Niger-Congo language-family and is renowned for its complexity. It uses infixes, syllables inserted in the middle words, to modify meaning and it has 26 different noun classes, in contrast to the English language which has none. While Fulfulde speakers from different regions of Africa are able to understand one another, the written versions of the language often differ to such an extent that book publishers must print up to 7 different versions of one book in order to make it readable for all Fulfulde speakers.

Traore moved to Bamako, Mali in 1999 and attended a private school with students from throughout the world. According to Traore, although Mali's official language is French, the African students at her school considered it flashy and un-cool to speak French and preferred to speak their native languages, shunning the non-African students. In defiance of such social norms, Traore's favorite language was French and her best friend was a Dutch classmate.

Traore and her family moved to the United States in 2002 when Traore's father began working at the Malian Embassy in D.C.