Marching band to have role in upcoming thriller "State of Play"

The Blair marching band and color guard have been cast for a background role in the upcoming movie "State of Play." Around 50 Blair students will shoot their scene at the Scottish Rite Temple in Washington, D.C. on March 20 from 7 a.m. - 3 p.m., according to band sponsor and instructor Michelle Roberts.

The film, starring Ben Affleck, Russell Crowe and Rachel McAdams, features a scene during which actors walk up the stairs of the Scottish Rite Temple while the color guard and marching band play at the top of the steps, according to Roberts. 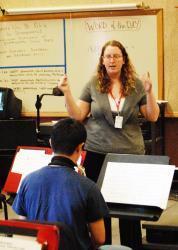 Rich King Casting, the company hired by Andell Entertainment to cast extras in the movie, has been looking for Washington, D.C.-area talents to take up minor roles. The company called Roberts after noting the school's proximity to the set's location. "They were in the area and were looking for a band," Roberts said.

Casting managers wanted a large color guard to fill the stairs, so members from the school musical "The Beauty and the Beast" were invited by Roberts to bolster the marching bands' numbers. According to Roberts, an additional 11 students from nearby Paint Branch High School will join the Blair students in the scene. Rich King Casting contacted Paint Branch's marching band instructor Sean Kirchhoff to bring additional numbers to the overall group.

The color guard will spin rifles, as opposed to the normal school flags. As a result, Roberts held a mandatory practice session from 2 - 5 p.m. on Saturday, during which color guard instructor Dawn Simounet helped students adjust to the style of rifle spinning. Simounet works independently of MCPS, but coaches area color guards, including both Blair's and Paint Branch's.

The marching band will also rehearse music Monday, Tuesday and Wednesday, and will play either "El Capitan" or "The High School Cadets" for the scene while wearing the standard Blair marching band uniform.

Blair will receive a donation from Andell Entertainment to be used specifically for the school's music program, according to Roberts. All transportation and food costs will be covered by the production company.

Based off of the British Broadcasting Company (BBC) series "State of Play," the movie portrays the efforts of journalists and an investigator in solving the murder of a congressman's mistress. The film is set to be released and distributed by Universal Pictures in 2009.