Marching into the opportunity of a lifetime

Musicians usually spend years practicing their instrument and perfecting their craft. However, for sophomore Ethan Shoham, it only took him six-months of practice to land a spot in a nationally-renowned drum and bugle corps. This past January, Shoham won a contract to play the mellophone with the Spartans Drum and Bugle Corps and to tour all across the United States over the summer.

Shoham originally heard about the experience from the Blair band teacher Raife Oldham, and marching band leader, Edward Kirk. “Mr. Oldham showed us a video of the winner of the previous nationals season. Seeing this beautiful show captured me. The performance was on a level I had not thought possible, and I wanted to be on that level,” Shoham says.

After a bit more research, Ethan found to his disappointment that DCI, only took drumline, valved brass instruments, and colorguard. “I had initially been playing clarinet for seven years. However, the corps was brass and percussion only. I was impressed and really wanted to be there, so I decided to switch [from clarinet to mellophone],” Shoham states.

Switching instruments is not an easy feat, especially from woodwind to brass. The clarinet is mainly a melody instrument, while the mellophone can be overpowering. “The mellophone is a little bit like a french horn, but more piercing and a lot more powerful. The moment I knew I wanted to do DCI is when I saw a performance open with 24 trombones blasting an opening. The pure power and volume that is produced is awesome,” Shoham continues. 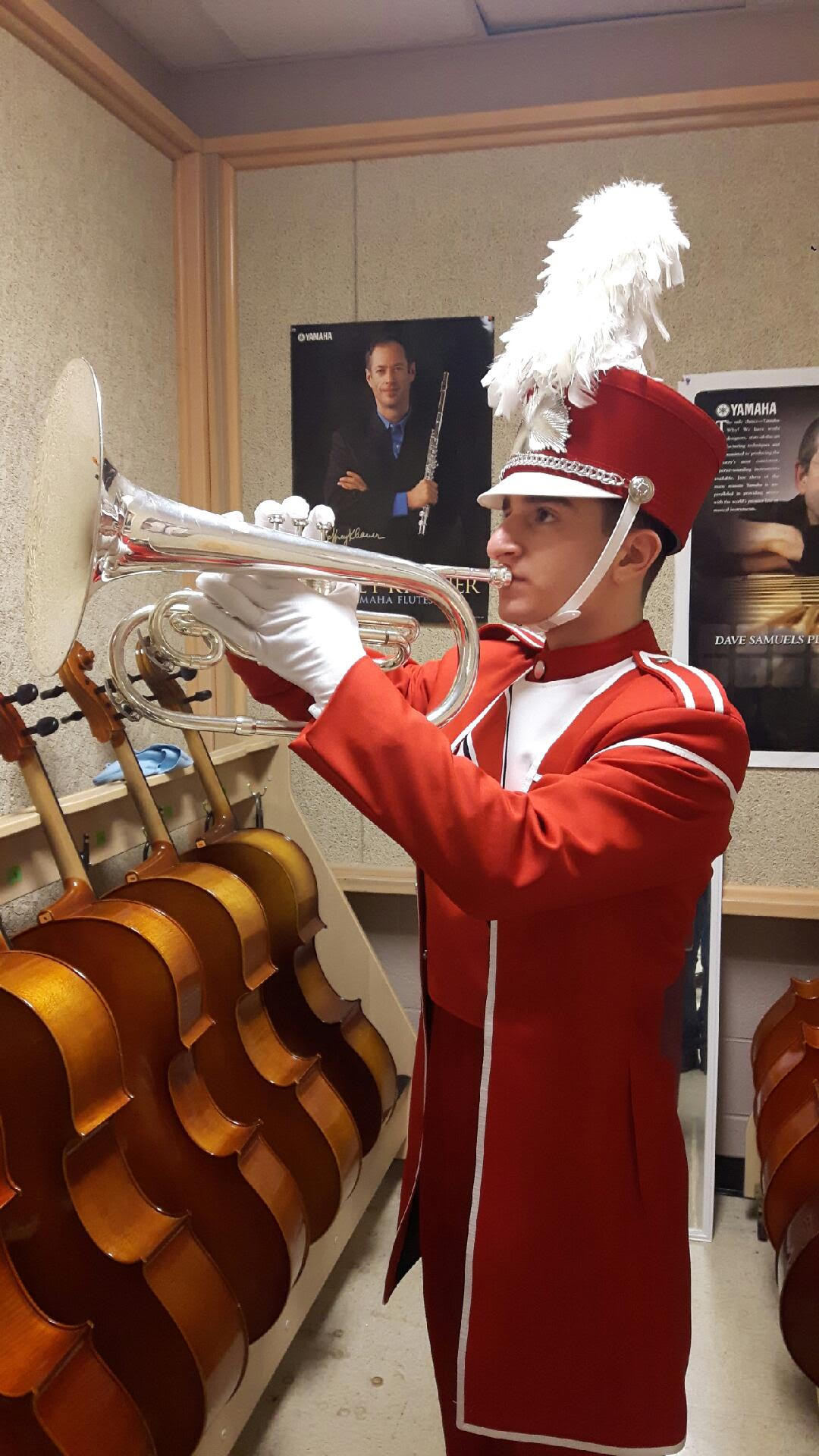 Kirk comments that what Shoham did is nothing short of incredible. “To join DCI, you have to be between the ages of 16 and 21. He is 16 and in a corps. That’s a really big deal, and he’ll be marching with college kids,” Kirk comments.

At the start of Shoham’s journey towards a spot in a DCI corps, Kirk was with him every step of the way. “Ethan started over the summer with the mellophone from square one. Every now and then, I would meet with him and give him advice. When the school year rolled around again, he started playing mellophone in the band to gain more experience. In the DCI corps, they have to hit hundreds of positions in one show,” Kirk continues.

The instrument switch was just the beginning. In order to get into such a competitive touring group such as the Spartan’s touring group, one must be willing to put in travel, hours of repetition, and a multitude of disappointment.

The audition process comes with grueling hours and sleepless nights. “It was a week-end long workshop where they teach you their style of marching. They then pulled you into a room with two other people and you played your prepared music for them. These weekend long auditions happen once a month from November to February. If you don’t make it in the first audition, they tell you to come back next month for another shot,” Shoham says, “I actually had to audition two times before I got the contract and offer to tour with them.”

Despite all the hard work he put in, Shoham says that he wouldn’t rather spend that time doing anything else. Shoham cites the whole community experience as what inspires him the most in marching band. “It’s an experience like nothing else. I am so lucky to have found [marching band] people. You boil together at band camp and freeze together at parades. Spending weeks on end with these kids and living out of each other’s pockets will be like nothing I’ve ever experienced before,” Shoham concludes.

Shoham’s main takeaway for aspiring musicians is perseverance. He advises others to try marching out and see what it’s like playing in a corps. At the end of the day, Shoham hopes that he can open doors and set an example for others. He notes that marching band is a big family that works together and that you truly feel “unstoppable.”

See Ethan Shoham perform with the Spartans Drum & Bugle Corps here. The New Hampshire based group will be going on a seven week tour starting in mid-June. They will hit stops in FL, NC, and VA. Find their tour schedule here.