Note to everyone who is currently standing in line to see "Marie Antoinette": run, do not walk, to your nearest CVS. Buy yourself a sophisticated looking notebook and a pen. Not only will you look cool and aloof as you scribble throughout the movie, but you will need to take some notes to keep track of the film's scattered plot — plus you can doodle when you get too confused to keep watching. Also, don't forget to bring extra cash so you can calm your rattling nerves and whining stomach with a Lemon Buzzball from CakeLove post-viewage, because this movie will make you hungry for all kinds of substance afterwards, only one of which is cake. 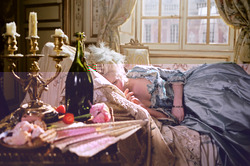 Yes, Sofia Coppola's latest indie confection, "Marie Antoinette," is as winding and surreal as the maze-like footpaths flanking Versailles, where much of the movie's "action" takes place. The story follows the tale of the young Viennese princess Marie Antoinette (Kirsten Dunst) as she is married off to the prince of France, the demure Louis XVI (Jason Schwartzman) in hopes of producing an heir to the French throne. Problems quickly arise for the young couple when Marie discovers her husband's reluctance to consummate the marriage bed and finds herself forced, prematurely, into the role of queen when the old King dies, just as she is adjusting to the bizarre French customs she is forced to adapt. In the midst of all this turmoil, Marie finds herself entirely alone in the haunting halls of the palace, and reacts by throwing herself into the world of the superficial. As the French people grow poorer and poorer, Marie buys more and more shoes and cakes and expensive hairstyles, and attends more and more parties, leading her down an ultimately disastrous path.

As far as the story goes, Coppola's script and characterization fall flat. People speak in a twisted pseudo-modern dialect, and the inane things that they say to one another (in one scene, the princes' henchmen muses that he expects he will marry a woman who looks like a horse) gets the characters' personalities lost in translation (pun intended). There are so few realistic transitions between scenes that the movie ends up feeling like a garbled patchwork dress, splattered with pretty colors and good intentions, but not substantial enough to function. The dialogue seems to undermine characterization, and is sometimes so banal that even the most active scenes feel tedious. This is particularly a problem with Antoinette; you know you're supposed to feel sorry for her, to be able to understand her deteriorating morals and her whimsical impulses, but she seems to say and think too little for viewers to make any sense of her at all.

As Antoinette, Kirsten Dunst is tolerable because she plays the same character as always — the sly, childish girl with the feminine lilt — except this time with a six foot pompadour. But she's not as powerful in this role as in previous ones, such as her turn as Lux in one of Coppola's earlier films, "The Virgin Suicides." The rest of the cast is sturdy and believable, though not overtly compelling, and the only character that stands out is Jason Schwartzman as the young Louis XVI. As the young and sexually stressed prince, Schwartzman is adorably clueless — ladies will surely fall for his trademark "worried look" and meandering charm.

The most amazing aspects of "Marie Antoinette" are the lovely backdrops that the movie was filmed against. Shot on location in Versailles, the movie is a savory piece of eye candy. The rooms are stunning, Antoinette's luxurious and elegant wardrobe is jaw-dropping (her shoe collection would make Carrie Bradshaw cry) and the food looks so well-crafted and elegant that you'll actually want to sprint to the nearest bakery the moment you leave the theater. But the beauty of it all almost seems to take on a surreal quality; even the soundtrack is covertly modern — at a masquerade ball, royals boogie down to popular music groups such as The Strokes. In one scene, Marie tries on shoes in a montage synced with the song "I Want Candy," (in which there seemed to be a pair of lavender Chuck Taylor's) a fitting summary for the whole movie's kitschy and bizarre feel.

Sophisticated films with sparse dialogue are Coppola's trademark — all of the movies in her personal armada seem designed for the socially savvy and the aloof of the cinema-going populace. Yet somehow, her other films pull off the intended abstractness without seeming overly ridiculous, unlike "Marie Antoinette." In this film, she leaves too much to be interpreted, while the lack of transitions, warped dialogue and shallow characterization are simply too complex a series of plot devices for simple movie-goers to deconstruct. The movie doesn't flow, and it's hard to feel sympathy for her characters when she paints them as soulless hedonistic machines. Yes, the sets are breathtaking and the whole world around Marie Antoinette is beautiful, but overall the movie just isn't substantial. Truth be told, it's beautiful eye candy, but "Marie Antoinette," is just too half-baked to be good.

"Marie Antoinette" is 123 minutes and playing in wide release. Rated PG-13 for some sexuality and adult themes.