VH1's newest cooking show will give viewers the munchies

Martha Stewart and Snoop Dogg's new VH1 cooking show "Potluck Dinner" premiered Monday, inciting laughter and hunger in viewers. Though a bit stiff and scripted at times, the two hosts and their numerous celebrity guests employ overt marijuana innuendos, references to one another's checkered pasts, and hysterical contrasts between different cultures to keep the show funny and fresh.

The first thing that viewers see is the set, a stage split down the middle, with one side displaying a typical middle class kitchen, complete with white tiled floors, wooden cabinets, and a stainless steel refrigerator. The other half is decked out in black granite, and the centerpiece is the back wall, which houses a backlit floor to ceiling hydroponics display of different strains of marijuana. The grill of a car adorns the front of the counter for Cordozar Calvin Broadus, Jr., known as Snoop Dogg, while Martha's displays a collection of frying pans, and the names of both hosts are written above the set in huge, glittery lights. 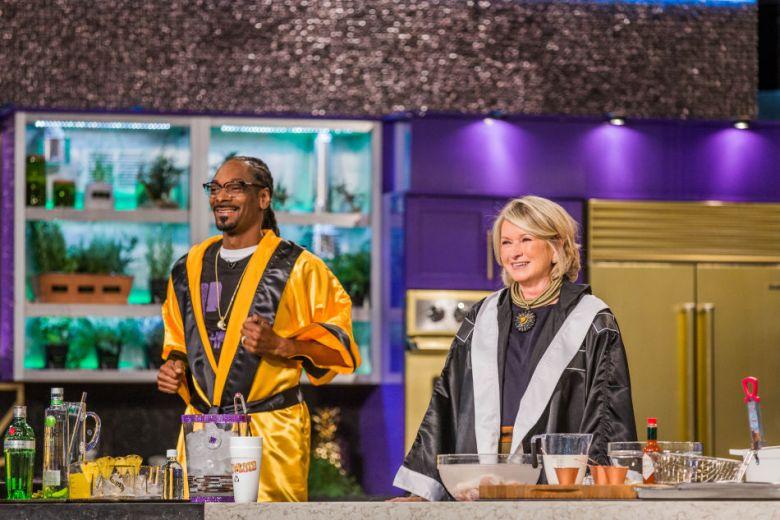 Photo: Snoop and Martha eagerly await a verdict on their fried chicken recipes.

Photo: Snoop and Martha eagerly await a verdict on their fried chicken recipes.

Snoop opens the proceedings by announcing a fried chicken cook-off between he and Martha for a giant WWE title belt with drumsticks emblazoned across the front. Each host brings forth a guest star to help him or her with the cooking process; Martha introduces rap icon Wiz Khalifa and Snoop greets actor/producer Seth Rogen, both of whom are also iconic figures in the world of weed.

This show is all about innuendos. Stewart and Dogg both have notably sketchy pasts, with Snoop's professional career being dominated by his propensity for getting high and Martha's recent run-ins with police over white collar crime including security fraud and obstruction of justice. Neither celebrity is afraid to confront the past, with frequent references made to Martha's time in jail and Snoop's extracurricular activities. The fast-growing legal marijuana industry must love this show, because by the end of the night all of the stars were high and all of the chicken was laced with Khalifa Kush.

The other comedic technique that drives this show forwards is contrast. The differing cooking techniques of Martha and Snoop are hysterical; while Martha's chicken takes three days to marinate in the fridge, all Snoop needs is twelve minutes and a bag of potato chips. Two very different audiences are attracted by the urban, bling-covered side of the show and by the self-proclaimed lifestyle goddess Martha Stewart. This contrast is made all the more obvious by Rogen's well-timed quips; "This is probably the weirdest group of people that's ever been on a stage together;" and by the music that emanates from each fridge when opened. Martha's features an angelic refrain, while Snoop's showcases the instrumental track from one of his songs.

The one thing that seemed to hold this show back in the opening later proves to be an ingenious comedic addition. The two hosts opened the show noticeably stiff, reading from cue cards and batting prepared one liners back and forth. This repressed style turned the show into a satire of every cooking segment ever, while also putting even more emphasis on the thinly-veiled drug-related references.

Episode one culminates in a hazy dinner in which Martha, Snoop, Seth, Wiz, and rapper Ice Cube decide on which chicken is the winner while getting high on the laced poultry, playing two truths and a lie, and continuing to make fun of one another's illicit exploits. This scene includes one of the funnier but more under-the-radar aspects of the show; Martha Stewart got very high during each and every episode. 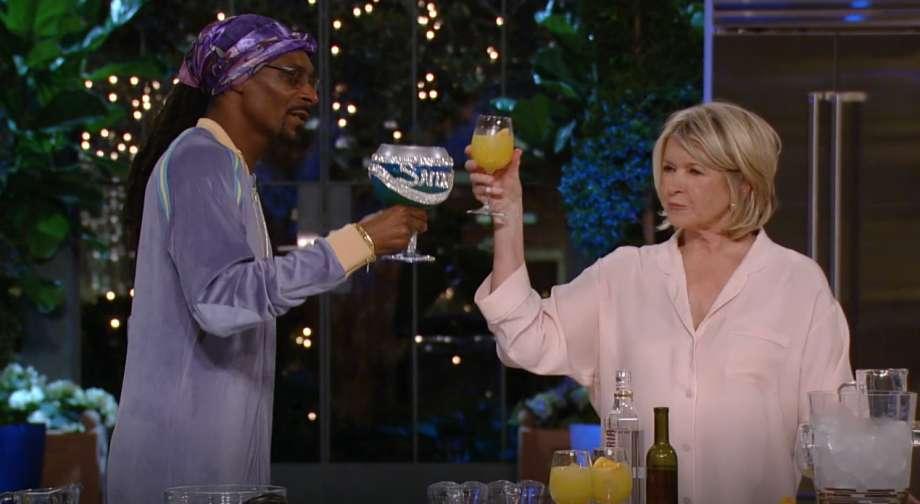 Photo: Snoop and Martha toast to a job well done.

Photo: Snoop and Martha toast to a job well done.

The show exploits the good and the bad of every A-lister present. Snoop corrects Martha's grammar. Martha dances seductively to a hip hop track. Seth gives the show a fire extinguisher as an opening night present. Wiz constantly munches on edibles. One can only hope that upcoming guests DJ Khaled, Robin Thicke, 50 Cent and Bella Thorne will be as willing to make fun of their own reputations as those in the first episode.

Coming from someone who has never much enjoyed watching other people prepare and enjoy food, this show was a gangbuster. Tune in just to see Snoop Dogg and Martha Stewart standing on the same stage; stay to watch a hilarious give-and-take bolstered by actually decent cooking.