Maryland's new driving laws to go into effect in October

"Sweet Sixteen" has turned sour for many Maryland teenagers. On Oct. 1, a new law takes effect that lengthens the time drivers must hold learner's permits, raises the minimum age for obtaining a provisional license to 16 years and three months, raises the minimum age for obtaining a regular license to 17 years and nine months and imposes new behavior restrictions on teen drivers, according to the Maryland Motor Vehicle Association (MVA) web site.

The new law was passed in response to parental pressure, a spate of car accidents since last September involving teenage drivers and recent research from national automobile safety groups regarding the driving conditions that make teens unsafe motorists, according to the MVA.

In addition to raising the minimum age requirements for provisional licenses, the law revises the qualifications necessary for receiving a provisional license in three ways. First, teen drivers must have a learner's permit for six months, instead of the current four months. Second, applicants must have 60 hours of driving experience instead of the current 40. And third, ten of those hours must be nighttime driving hours. 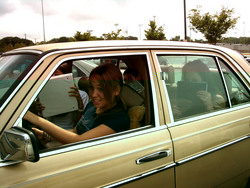 Photo: The penalties for driving with passengers during the first five months after receiving a provisional license are paying a fine and restarting the five-month process.

Photo: The penalties for driving with passengers during the first five months after receiving a provisional license are paying a fine and restarting the five-month process.

The majority of Blazers do not think the new laws are reasonable. An informal survey of 100 students conducted on Sept. 9 revealed that 70 percent of Blazers think the laws are too strict. However, of those 70 percent, 58 percent admitted that if none of the laws applied to them or any of their friends, they would support the legislation for kids younger than themselves.

With regard to the new provisions, Blazers object most to the passenger restrictions. Senior Stacie Hughes, who will not be affected by the rule, thinks that it is not the passengers that are the problem; it is the driver. "No matter how many passengers are in the car, whether it's one or five, if you're a responsible driver, you should be able to control your car. It's the driver's responsibility to tell [passengers] to stop being distracting," she said.

When the bill was proposed, the Maryland Legislature took into consideration research from the National Highway Traffic Safety Administration, which showed that teens are much more likely to get into an accident when other teens are present in the vehicle. State officials say that one of the major factors that causes teen accidents is inexperience. This is why the age minimums have been pushed up. Nationally, the crash risk per mile driven by 16 year-olds is twice that of 18-to-19 year-olds and about seven times that of drivers ages 30-59, according to the National Safety Council.

Other students do not want to have to comply with the law, but understand why it has been put in place. Freshman Elena Gooray admitted, "It's true that most accidents for teens are caused with people in the car—it's distracting and kids are usually too stupid or inexperienced to concentrate on the road, but I think it's going to be really inconvenient when I can't drive with my friends or carpool for five months."

Another section of the bill that has stimulated a lot of discussion is the provision that restricts cell phone use by 18-year-olds. Numerous students at Blair said they were not too upset about this rule because they already refrain from using their phones while at the wheel. Several believe that prohibiting cell phone use while driving should be extended to all Maryland drivers, including those over age 18. Junior Aaron Townsend said, "The cell phone restriction is fine but it should be for everyone, not just teens—that's unfair. Phones are a distraction to all drivers."

It is unclear whether or not Maryland will adopt a broader ban on driver cell phone usage, which the District has done; however, both the House and Senate Committees of the Maryland Legislature have considered such a ban several times over the past year.

October will reveal how capable police departments are at enforcing the new laws. Freshman Joe Gilbert predicts that the rules will not have a tremendous effect on road safety. "I don't think these laws will be enforced. It seems like the police won't be able tell the difference between someone that is breaking the law and an older driver with their friends," he predicted.

Under the new law, police cannot stop drivers solely to verify their age and determine whether or not they are breaking the law. Police can only cite drivers for violating the law if they are first stopped for another offense, such as speeding or running a red light, according to the MVA web site. Teen drivers may go to great lengths to comply with the restrictions as a result of the stricter penalties for breaking the law.