Code Girls, led by senior Shreeya Khurana, meets weekly to immerse students in coding and web development projects. Under the National Center for Women and Information Technology (NCWIT), Khurana partnered with Karen Harper from Building Engineering and Science Talent (BEST) to reach out to local women in STEM fields. "I've always seen a lack of females in STEM, especially computer science," Khurana said. "Thankfully, Code Girls was able to connect me to Karen and these amazing women."

Dr. Barbara Nichols, a materials research scientist at the U.S. Army Research Lab, described the early influences that directed her toward STEM. Nichols referred to Michael Jackson's 1982 hit, Billie Jean— specifically the piano keys that lit up beneath his feet as he moved in the music video. "I didn't really care about Billie Jean, or her lover, but I wanted to know how they did that," she said. "I think that was the first thing that really got me into electronics and sensing." Nichols took advantage of the opportunities at her school, seeking out engineering opportunities for minority students and utilizing her programming skills. She went on to major in Materials Science, obtaining her B.S. from MIT and her Ph.D. from Northwestern University.

Although neither of her parents went to college, Major Natalie Collins found a place at the Walter Reed Army Institute of Research (WRAIR). Collins was fascinated by the 1995 movie Outbreak. She loved the idea of tracking down an infectious disease and saving others, but she didn't appreciate that the heroine became infected and was saved by men. "I felt like my job in life was to rectify this wrong," Collins said. "We could easily have the female find the non-human primate, developing the vaccine, administering the vaccine, instead of being saved."

Collins set her mind on epidemiology, serving as an intern in research labs and a combat medic in the military. Now the Chief of Diagnostics at WRAIR, she cited the army as a useful tool in shaping her career, paying for both her B.S. and Ph.D. and building the spirit of constant growth.

Marine Corps Engineering Competency Manager and Federal STEM Action Officer Karrin Felton pointed to basketball and piano, which helped her develop focus and curiosity. She emphasized the importance of surrounding oneself with positive influences. As a high school student, Felton met every morning with her "breakfast club," a group of friends constantly reminding each other of their goals. "Be careful of who you choose to be your friend, because they will influence you whether you want them to or not," she said.

Dr. Yaireska Collado-Vega currently leads the space weather forecasting team at NASA. Her journey from a low-income family in Puerto Rico spells the hard work behind this title. She fell in love with NASA early on, despite the lack of support from her community. Although she had to leave her family in Puerto Rico to pursue her dream, Collado-Vega realized that the words of others couldn't shake her goals. "A lot of people told me I couldn't be a scientist because of the way I look," she said. "I said, 'I don't care. I'm never going to change the way I look.'"

Monica Chu, a post-baccalaureate research fellow with the US Army Research Lab, also had no clear path for the future as a student. "I didn't know what I wanted to do, and that's okay," she said. "I put four types of engineering on pieces of paper and I picked out bioengineering." Chu switched between many labs while discovering her true interests, and said the changes had positive effects. "It helped me to be adaptive," she said. "I had to learn a lot of jobs, and I learned to ask a lot of questions. 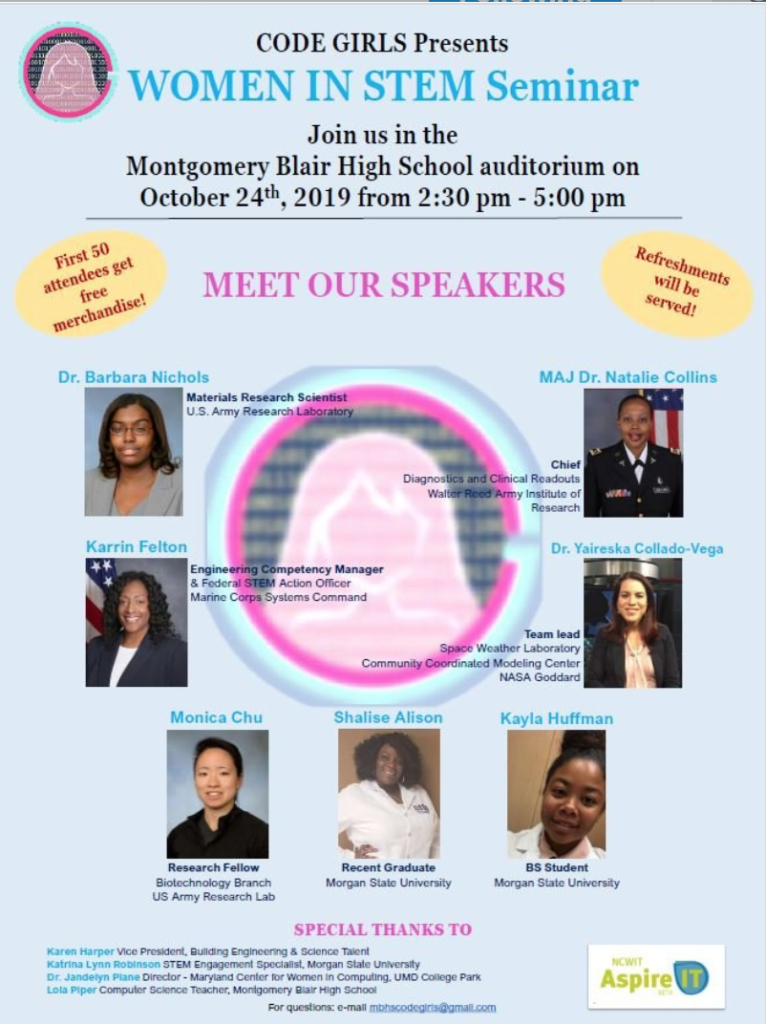 Photo: The event was a unique opportunity to meet impactful female scientists and engineers

Photo: The event was a unique opportunity to meet impactful female scientists and engineers

Shalise Alison said she had a rough road as a woman in STEM. Alison immigrated to the U.S. from Jamaica, had to take English for Speakers of Other Languages (ESOL) classes and was bullied by students. She was accepted to Morgan State University but opted to go to trade school for child care instead. Later, Alison was again deterred from attending university when she became pregnant at age 21. She eventually obtained her B.S. in biology at Morgan as a single mom, making it clear that there was no end of the road. "I'm getting my master's in teaching right now, but I will be a biologist one day," she said. "A difficult road often leads to a beautiful destination."

Growing up in a family of female nurses, Kayla Huffman was always accustomed to helping others. "I was known as the girl who carried a med kit no matter where I went," she said. "When other kids got injured on the playground, I was there before the school nurse was." She noted that taking the time to discover specific STEM fields and finding a suitable college environment as key aspects of finding one's passion in science. She is now working toward her B.S. in biology at Morgan State University.

Felton pointed to Hidden Figures, a true story of three brilliant African-American women at NASA who powered the launch of astronaut John Glenn, as an indicator of the importance of women in STEM. "In the back of that movie theater, I was in awe to say that I shared something with those women," she said. "I remember the trail that they blazed for somebody like me."

Students gathered for a reception and question-and-answer session at the end of the seminar. Attendees appreciated the representation of diversity in STEM fields. "I liked that the presenters were people of color," junior Saron Kebekab said. "Seeing their journeys into the STEM field gave me a chance to see future opportunities of my own."

Khurana wants to keep connecting girls to role models in the future. "I wanted the girls to see female leaders in STEM and envision themselves in these careers," she said. "Hopefully, in college, I'll be able to plan these events for high schoolers and middle schoolers."