After returning home from a tour through Ireland over spring break, I was disappointed to find that because I was not 18, I was unable to eat and enjoy traditional Irish music and dancing after 9 p.m. in a pub back in Ireland. The only pub my friends and I were able to eat in (at 6 p.m.) was a place named O'Neill's, a cozy pub in Dublin that served buffet-style meals. Fortunately for me and residents in and around Silver Spring, McGinty's Public House has recently opened, providing authentic Irish culture to downtown Silver Spring and City Place Mall.

The pub, which is modeled after pubs in southern Ireland, features several bars, fireplaces and wooden seating. Though bigger than many pubs in Ireland and lit with more sunlight, the pub follows the Irish tradition of public houses, and the menu includes many traditional Irish dishes, such as the Galway seafood chowder, Irish pork 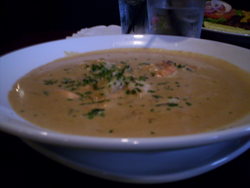 sausage and a corned beef and cabbage dish.

The Galway seafood chowder is deliciously creamy and seasoned. It includes potatoes, shrimp, clams and other various bits of fish. While chowders are usually over-salted, this one was not, making it very enjoyable and filling. The meat was tender and not made soggy by the broth.

A not-so-Irish dish that was excellent tasting was the McGinty's burger. This half-pound burger was tenderly cooked (well-done) and moist and placed between two lightly toasted buns, along with onions, cheese, bacon, lettuce and a slice of tomato (a worthwhile candidate for Simon and Alex's burger reviews).

One of the desserts, Bailey's Irish Créme Brúlée, topped off the meal at this pub. This dessert was appealingly displayed on a plate, surrounded by powdered sugar, a strawberry and a twig of mint. The crème brúlée coated the throat with its creamy texture and had a subtle, sweet taste. Other desserts include the Irish Cream Torte and ice cream. 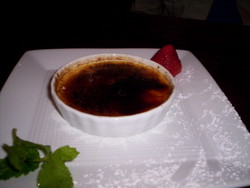 Though not the cheapest eatery in the Silver Spring strip, McGinty's is a great option for a family dinner and a better alternative than Chipotle for a sit-down dinner. The prices range from about $5 for kid's meals to between $14 and $17 for meals such as Fish and Chips and the Grilled Wild Rockfish. Desserts average around $7.

But the food is not the only thing that makes this restaurant unique in the midst of all the other food chains on Ellsworth Drive. Every Tuesday, the pub holds its Traditional Irish Session, and every Wednesday is Acoustic Night, according to McGinty's website.

There is a small bar on the bottom floor where the dining area is located. Upstairs is the Upper Bar, an expansive room where dances are held and drinks are served all around. The Upper Bar has seven plasma televisions as well as a stage to host performers such as the Glengarry Bhoys, who are performing at the pub on April 30.

The service is prompt and the waiters and waitresses are very friendly. The owners of the restaurant are both Irish born and have made it their goal to continue public house traditions and celebrate Irish culture.