MCPS outperformed the nation in Advanced Placement (AP) testing performance and participation, according to a 2005 CollegeBoard report. In MCPS' graduating class of 2004, almost 40 percent of students - twice the state average and three times the national average - achieved a passing score of three or above on at least one AP sometime during high school.

In 2004, Blair showed a significant increase in AP participation with more students taking AP exams than ever before. In 2003, 510 Blair students took 1,288 AP tests; in 2004, 582 students took 1,528 exams. Most colleges require a score of at least three for a student to receive credit.

Despite a drop in the average AP score and the percent of passing students, 86.9 percent of Blair students scored threes or above. Blair students surpassed the MCPS average of 75.9 percent and were outperformed only by Poolesville (88.2 percent) and Whitman (90.4 percent). 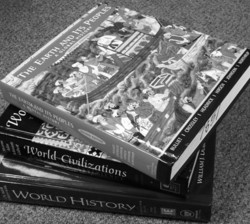 Photo: AP World History is one of the courses that will be changed next year.

Photo: AP World History is one of the courses that will be changed next year.

This year, Blair administration has implemented a new AP Potential program to identify students with the aptitude to do well on AP tests based on a study conducted by the CollegeBoard. The study shows a strong correlation between AP exam and PSAT scores.

The program targets sophomores and juniors who performed well on the PSATs but have not taken an AP course and encourages them to enroll in such a course; the study shows a consistently higher correlation between AP exam grades and PSAT scores than between AP exam grades and high school grades and courses completed. "There's a big push for kids who have the ability and who haven't taken [any AP tests] before," said Principal Phillip Gainous.

Blair's increase in AP enrollment is the largest in the past five years, which reflects the recent nationwide push to expand student access to and participation in AP classes: In 2004, more students than ever in all 50 states and Washington, D.C., passed at least one AP course in high school.

Further studies done by CollegeBoard show that even for students who do not score well, simply taking an AP class increases their chances of graduating college. "You gain experience from taking AP tests," explained Gainous. "It's similar to the experience you're going to have in college and university."

For students unable to pay the $82 testing fee, Blair offers full waivers. "We will do everything we can to ensure they'll take the test," Gainous said. "No student will be in [an AP] class and be unable to afford to take the test." Funds come from vending machine revenue.

According to Joseph Bellino, the student data coordinator who compiled the CollegeBoard's AP Potential statistical-analysis program with Blair's PSAT database, national averages show that students who take AP courses typically have PSAT scores averaging about 60 out of 80 maximum points for each section, though students with scores as low as 40 out of 80 have approximately a 50 percent chance of passing an AP test.

By implementing the new program, Blair will be considerably expanding its AP-testing student base, which currently includes over 530 students. Of the 1,070 sophomores and juniors who took the PSAT test last November, 58 showed the aptitude for at least one AP course but were not signed up for any such courses. Students were selected if the AP Potential statistical-analysis program indicated they had at least a 50 percent chance of scoring three or above on an AP exam.

This year's passing students also include more minorities than in past years: At Blair, 14.2 percent of African Americans and 15.4 percent of Hispanics of the 2004 graduating class scored at least one three or above, compared to 9.3 percent and 4.7 percent respectively in 2000. County figures reflected a similar increase. However, the achievement gap in both the county and at Blair remains significant, as more than twice as many white and Asian American students in the county and more than four times as many at Blair achieved a three or above, both in 2004 and 2000.

Sherri Geng. Sherri Geng is a senior in the Magnet and SUPER excited for what promises to be another excellent year of Silver Chips! She has insane love for chocolate, sleep, funny people, and her big fat lovable dog Teddy, who is the smartest and most perfect … More »

Renee Park. Renee is a senior in the Magnet Program (finally!) and is psyched about a brand new year of Chips, Chips and more Chips! She's currently wondering why she took MathPhys with Silver Chips and how soon she'll die, but meanwhile, Renee's enjoying writing, reading, studying … More »