On March 29, Joel Shapiro started a petition to Montgomery County Public Schools (MCPS) requesting "that MCPS moves our grading system to a Pass/Fail system rather than the traditional letter-grade system" in light of the COVID-19 crisis, citing student stress as the main reason. 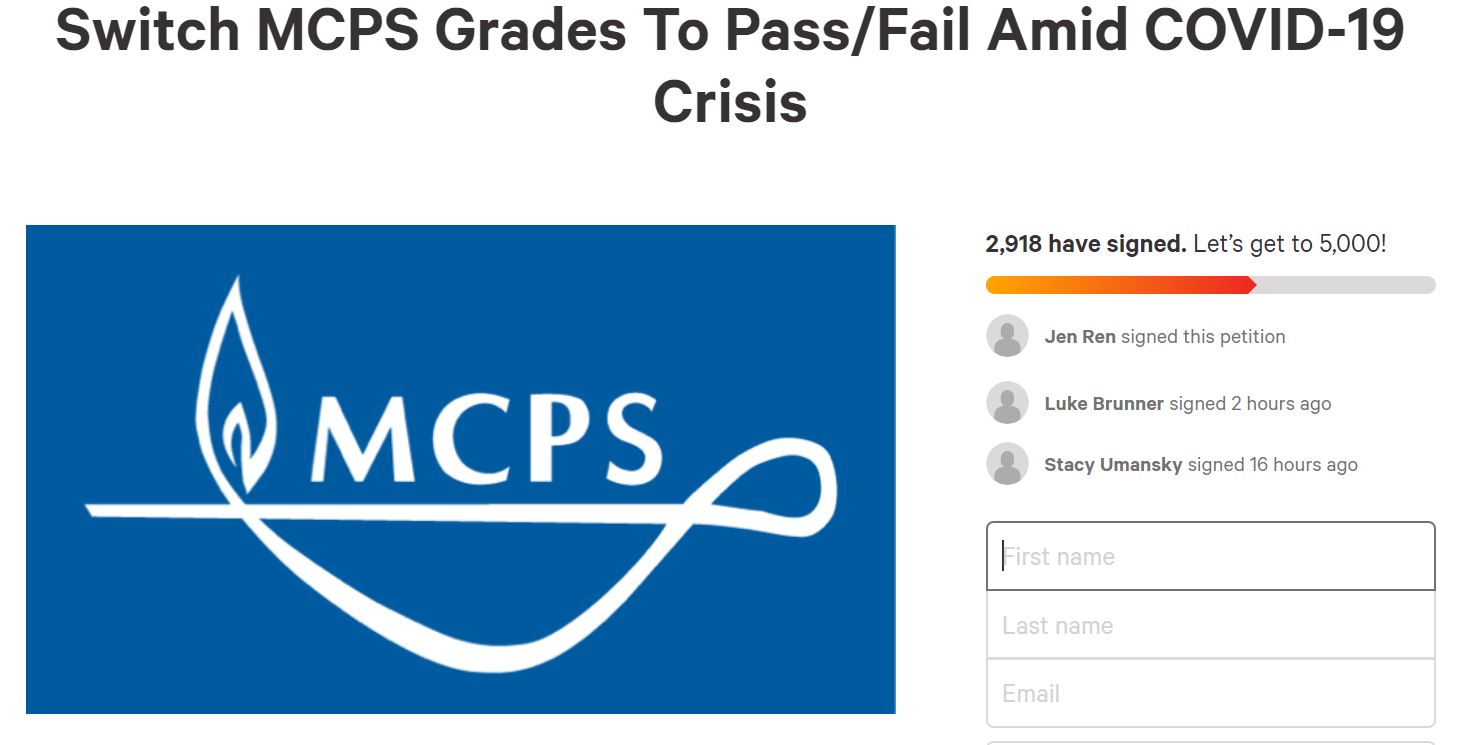 Pass/fail grading systems are often used by colleges, especially to give students an opportunity to take courses that they might not be as familiar with. For example, a biology major might want to take an art course, but not want to have to worry about a bad grade affecting their GPA. A pass/fail grading system would give them that opportunity. However, there is no need for a pass/fail system among high schoolers, who don't have an area of expertise.

Many students strongly oppose transitioning to this system. "Pass fail is a bad thing if you want to get into a good college," junior Conrad Bohn commented on a post advertising the petition. He is not without reason. A poll published by the National Center for Biotechnology Information examines how being in a pass/fail grading system versus a traditional grading system impacts medical students' acceptance into a residency program. The poll found that a pass/fail system negatively affects a student's chances. "Eighty-one percent of program directors believed that the medical student's ability to compete for a residency position was adversely influenced by the pass/fail method of evaluation," the abstract explained.

Additionally, transitioning to a pass/fail system could hurt students' GPAs, further harming them in the college application process. Traditionally, passing grades are not factored into a student's GPA. Students who were relying on having this semester to improve their GPA would suddenly have that opportunity taken away from them if MCPS were to switch to a pass/fail system. Not to mention that there are also seniors who rely on certain GPAs to get scholarships from colleges.

Moreover, a pass/fail system unfairly rewards students for doing the bare minimum. "Those who get a 65 shouldn't be given the same reward as those who put in the work for a 95," Bohn said in his comment. A pass/fail grading system encourages students to do just enough work for a class to pass, and then acknowledges them in the same way as students who put maximum effort into the same course.

In remote learning scenarios like the one that MCPS currently finds itself in, the traditional grading system incentivizes students to continue to put in effort and work hard. It holds students accountable when teachers aren't able to do so to the extent that they can in a regular classroom setting.

If MCPS truly wants for its students to get the most out of a class, then they can't switch to a pass/fail system. Not only does it encourage and reward minimal effort, but it can also have negative impacts on students' chances in the college application process. It is unfair to hardworking students who consistently put their all into school to have that chance taken away from them.