On Jan. 25, the Site Selection Advisory Committee (SSAC) met at Bethesda-Chevy Chase (B-CC) High School to discuss the location of a new Montgomery County Public Schools (MCPS) middle school in the B-CC cluster. At the meeting, committee members went through a list of possible sites in order to choose one to recommend to the MCPS Superintendent. Sites on the list include Rosemary Hills Park and Grace Episcopal School. 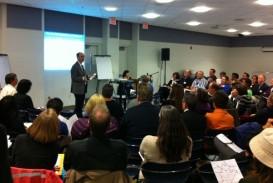 Photo: The SSAC met on Jan. 25 to discuss locations for a new middle school.

Photo: The SSAC met on Jan. 25 to discuss locations for a new middle school. Photo courtesy of Chevy Chase Patch.

The meeting was the second in a series of four planned to choose a location for the new middle school, which is estimated to open in 2017. The B-CC cluster needs a new middle school due to increased enrollment. Currently, Westland Middle School is the only one in the cluster and is overpopulated, according to Bruce Crispell, the director of the Division of Long-range Planning for MCPS. "That school is already over capacity and it's growing really dramatically," he said.

According to Crispell, a list of 25 public and 13 private sites has been established. At each meeting committee members weigh the pros and cons of each site in hopes of selecting the best location. "Essentially they're trying to reduce a wide field of 38 possibilities down to a small number of sites they think the Superintendent could use," Crispell said.

After the SSAC makes a decision, they will give their recommendations and reports to Superintendent Joshua Starr, who will then make a recommendation to the Board of Education, which will ultimately determine the new location.

The committee members are a mix of representatives from the government, B-CC cluster schools and private homeowners associations. Of the 25 public sites originally on the list of possiblities, 14 have been eliminated after SSAC discussions. Still under consideration are 11 public and the 13 private sites. In order to discuss the private sites, the SSAC must go to closed sessions in which all committee members are required to sign confidentiality agreements and public observers are not allowed to attend.

At the Jan. 25 meeting, it came up that Rock Creek Hills Park, the site of Kensington Junior High School, which the SSAC had previously thought was unsuitable is actually usable. A letter had been delivered to the Rock Creek Hills community on Nov. 4, 2011 and SSAC members were upset that it took so long to get in the hands of MCPS. "The committee was feeling like this information would have been a lot more valuable earlier in the process," Crispell said.

According to Crispell, the committee has faced obstacles in trying to find a suitable site for the school. "The B-CC cluster is a pretty built out, older community so there is not a lot of land available," he said. "The land [itself] is quite valuable." Additionally, some private homeowners are not enthusiastic about the suggested locations. "There's some homeowners associations that aren't crazy about having a school built in their neighborhood," Crispell said.

Because of the committee members' many differing views, the meetings have been facilitated by the Montgomery County Conflict Resolution Center, a non-profit group that helps individuals and groups effectively solve problems. "We [MCPS] usually facilitate these types of meetings, but this has gotten to such a level of controversy that the Superintendent felt like it was better to have an external facilitator," Crispell said.

The next SSAC meeting will take place on Feb. 8.