The cost of Blair's graduation ceremonies is projected to more than double this year, a burden that could prevent the rising senior class and future classes from graduating at the University of Maryland College Park's Comcast Center. Initial county estimates, outlined in a memo by the Office of School Performance, project that commencement at the Comcast Center for the class of 2009 will cost Blair $13,000. 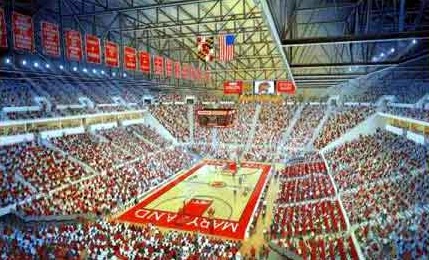 Photo: Blair is expected to pay $13,000 to graduate the class of 2009 at the Comcast Center next year. Photo courtesy of the University of Maryland College Park.

Photo: Blair is expected to pay $13,000 to graduate the class of 2009 at the Comcast Center next year. Photo courtesy of the University of Maryland College Park.

The four high schools with the largest graduating classes in the county - Blair, Churchill, Wootton and Sherwood - are eligible for $29,000 worth of subsidies towards commencements at Comcast. The remaining $13,000 cost must now be covered by the school, the memo stated. The deadline for the Blair administration to make a final decision on a graduation venue is July 31, as specified in the memo.

Blair has graduated students at the Comcast Center since 2007, when the commencement ceremony was moved from a nearby church - Jericho City of Praise - due to the threat of lawsuits from Washington, D.C. interest group Americans for the Separation of Church and State. In 2007, Montgomery County Public Schools (MCPS) paid for the ceremony to avoid legal entanglement. Last year, Blair contributed $5,000 to the total cost. This year, however, Blair may not be able to foot the $13,000 tab. "I can't see the PTSA picking up that much money," outgoing Parent-Teacher-Student Association (PTSA) co-President David Ottalini said.

The Blair PTSA is concerned with the new policy, stating that the sudden rise in cost unfairly affects Blair. Since Blair is the largest school in the county, no locations besides Comcast Center can accommodate next year's class of graduating seniors, Ottalini said.

The PTSA plans to appeal the decision to the Board of Education. "We will be raising the issue with MCPS and the Board of Education and hope…to get the fee reduced," PTSA co-President Robert Gillette said. "However, since we have no real alternatives, we will find some way of raising whatever fee we need."

The current alternate venues mentioned by the PTSA and MCPS include Prince George's Equestrian Center, which Blair has used in the past, as well as DAR Constitution Hall in Washington, D.C., the primary MCPS graduation site.

Both sites are inadequate for the size of Blair's graduating class, according to the PTSA. "The size of Blair makes graduating at Constitution Hall infeasible...the Equestrian Center is not on a public transportation line…and isn't really large enough for our graduation," Gillette said. "Given that we have no real alternatives, I feel that it is unfair of MCPS to penalize us for having to graduate at a more expensive venue due to our size."

Principal Darryl Williams said that no decision would be made without feedback from the Blair community, despite the pressure of the one-month deadline. "[The deadline] is something we have to work with," Williams said. "This issue is evolving."

Exact pricing for the Comcast Center still has not been set and costs would be kept down to the fullest extent possible, according to county spokeswoman Kate Harrison. "We still don't know for sure what [Comcast Center] is going to charge," Harrison said. "Everything will be done to keep the cost to schools to a minimum."

The PTSA insisted that MCPS do its part in negotiating lower prices with Comcast Center officials. "MCPS needs to negotiate effectively and aggressively to limit [the cost of commencement to schools]," said incoming PTSA co-President Pete Lafen.

The estimate of $13,000 could change depending upon the number of schools that choose to use Comcast Center, according to the Office of School Performance. The office also noted that schools eligible for subsidized graduation ceremonies receive far more funding than their smaller counterparts. "We're already allocating five times as much for these schools," Stephen L. Bedford, Chief School Performance Officer said.

The PTSA also questioned the July 31 deadline for a final decision. Due to the announcement's timing, Ottalini said, the news would not reach many members of the Blair community. "People just aren't focused on this at all, and that's understandable - they're on vacation," he said.

The Office of School Performance stated that the deadline was meant as a balance between the principal's need to gather feedback from the community and the county's need to reserve the Comcast Center as early as possible.

The decisions that Blair and the county reach will have repercussions for future graduating classes as well, according to Ottalini. "This is something that'll set a precedent for the future," he said.