MCPS gave all county high schools a stipend as part of a larger collaborative effort between MCPS and the Montgomery County Police Department (MCPD) to increase security at football games countywide.

Between $900 and $1,200 have been allocated for each school to intensify security, according to Athletic Director Dale Miller. Though Blair has not yet received the money, Miller said that some of it would be used to pay security guards to monitor away matches. Previously, Blair sent one guard to away games, but now, it sends two.

Miller and the Blair security team met after the September stabbing at Blake to discuss new measures to increase safety at Blair football games. At the meetings, security discussed the placement of officials and the efforts to clear the stadium and parking lot quickly after a game has ended, according to security team leader Ed Reddick. "If you don't give people the opportunity to misbehave, they won't misbehave," said Reddick, who believes that Blair security has always been vigilant at games and that drastic changes in the existing plans are not necessary. 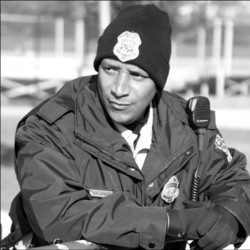 Every year, the MCPD meets with school security guards and athletic directors before the beginning of the season to determine which officers will provide security at games, explained Lucille Baur, an MCPD public information officer.

Blair has always had "top security" at all of its games, according to Miller, which includes stationing three to five security guards, two policemen and an Education Facilities Officer (EFO) at every game. "As far as numbers, [lack of security] has never been a threat," he said.

Along with security, Assistant Principal Andrew Coleman assigns certain administrators and teachers to attend games in order to monitor students in the stands.

To improve security at the county level, members of the MCPD met with the Board of Education and created a system that classified all the remaining football games of the season following the attack on a student at the Sept. 23 game between Blake and Sherwood. The system designates each game as one of three priorities: priority one, two or three, corresponding to a strong, low and no anticipation of violence, respectively. The MCPD also determines the number of police officers that must be present at the game depending on the priority status: Priority one games are staffed by a minimum of six officers along with the school officers of both the home and visiting teams, said Terry Pierce, MCPD administration lieutenant for field services.

Game priorities are determined by factors like notorious rivalries between schools, an undefeated record or "intelligence gathered on part of the school system" through student tips that could indicate a threat of violence, said Baur. According to Reddick, Blair does not have any priority one games. There are fewer than five priority one games across the county, but game status is always classified, said Pierce.

County principals also met with Superintendent Jerry Weast and determined that the responsibility of making games safer should be left to individual schools. Weast told the principals that the school system would support whatever changes they deemed necessary, according to Principal Phillip Gainous. Changes discussed included giving schools the flexibility of changing venues and times of games. Blair has not made changes because the "atmosphere at games has been positive" and the school wants to maintain a level of normalcy while still being diligent, explained Gainous. "Everybody's eyes [are] just a little bigger," he said.

At the school's discretion, the EFO can request extra policemen for any home game. But additional police have not been necessary this season, which Miller partly attributes to Blair's location near busy intersections. Police officers patrolling University Boulevard and Colesville Road can come into Blair and monitor activities, explained Miller. Since many students convene at McDonald's after football games, where they block roadways and create a potentially dangerous environment, Blair EFO Ralph Penn has asked for additional security near McDonald's throughout the season.

The funding source for the additional police presence has still not been determined, according to Baur. However, Pierce said, the police department is now footing the bill for the extra expenses. Even though the MCPD is unsure how it will generate the funds to pay for the additional costs, Pierce is confident that the money will eventually become available. "We will find the money. We don't know where yet, but we will find it," he said.

Along with added security, the MCPD hopes that parents will make an effort to prevent violence. In a Sept. 29 press release, MCPD urged parents to attend games to act as a deterrent. "[Parents] make kids know there are adults around, not to police or help with security, but as a presence," said Cindy Kerr, president of the Montgomery County Council of Parent Teacher Associations.

Blair is trying to intensify its security initiatives, but according to Miller, the recent fatalities cannot necessarily be attributed to security failures. "I've never seen security as a problem at Blair, but I am sure that's what the people at Blake said. Isolated incidents happen. Violence is violence, and it's always out there," he said.

On Sept. 23, 15-year-old Kanisha Neal, a freshman at Rockville, was stabbed to death at Blake during a fight that began after the football game between Sherwood and Blake. The stabbing was the second fatal attack at a game in the same week in Montgomery County. On Sept. 16, 23-year-old Stephone Wiggins was beaten to death with a miniature baseball bat after a football game in Germantown between Seneca Valley and Northwest. Both incidents originated from previous feuds unrelated to football.

Kristi Chakrabarti. Kristi Chakrabarti is finally a Magnet senior who is obsessed with basketball and is a die-hard Wizards fan. When she is not religiously following the NBA, she enjoys playing tennis and reading. Her favorite TV shows are Friends and ER and her favorite food is … More »