MCPS reinstated a hiring freeze on Aug. 20, preventing any new non-critical employee from being hired, according to Director of the Department of Management, Budget and Planning Marshall Spatz. The freeze, and other cutbacks enacted with the hiring freeze, will remain in effect for MCPS until June 30, 2010. 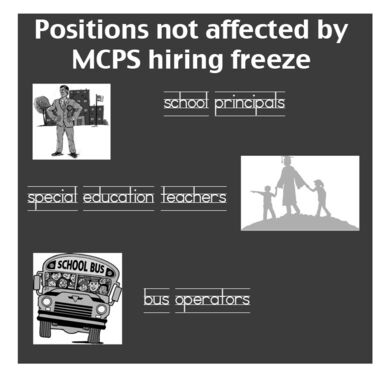 Positions not affected by freeze

Photo:
The hiring freeze was part of an Aug. 20 memo from MCPS Superintendent Jerry Weast that detailed financial cutbacks made by MCPS. The freeze was also in effect during the 2007-2008 and 2008-2009 school years, according to Spatz. "We were able to save a little over $20 million last year and we had a net savings of $17.4 million the year prior," he said.

The hiring freeze, according to Spatz, prevents the hire of non-essential positions. Spatz stated that the positions not affected by the freeze are jobs that are crucial to the-day-to day operation of a school, such as school principals, special education teachers, certain English for Speakers of Other Languages positions, bus operators and Head Start paraeducators.

This freeze, according to Spatz, will be lifted at the end of the school year, meaning that vacant positions will be filled normally during the summer months.

At Blair, the hiring freeze has not had much effect on the teaching staff, according to Principal Darryl Williams. "Fortunately for Blair, I thought I had every position filled before the end of the summer," Williams said.

However, Williams said that a few last minute staff vacancies led to some new personnel being hired. "Three positions became vacant late summer," he said. "We needed a new Magnet coordinator, security assistant and a registrar."

According to Williams, interviews for a replacement secretary are to be held soon and the other vacancies have been filled. While these three administrative positions were filled after the hiring freeze, Williams stated that no additional teachers were hired at Blair since the freeze officially began last month.

According to Weast's memo, any vacant teaching positions left will be covered by a long-term substitute instead of hiring a new teacher, unless an exception is approved. Williams said that, despite the imposed hiring freeze, there is still a process for hiring new staff members. "If a position is necessary, I can send a request which will be reviewed by the freeze committee, which can then approve or deny the request," he said.

The freeze committee, according to Spatz, though headed by the Department of Management, Budget and Planning, contains representatives from various MCPS offices.

According to Spatz, after the committee receives a request, it can choose to recommend or deny the request. However the committee does not have the last word in this process. "The Chief Operating Officer makes the final decision," he said.

According to Spatz, the criteria with which the committee reviews these requests are based on guidelines outlined in the Aug. 20 memo from Weast. According to the memo, an exception to the hiring freeze must be essential to the smooth operation of the school in order for the hire to be approved by the county. Spatz stated that the committee has already dealt with several requests but only a few of these hiring requests met these requirements. "I would say over 100 requests, have been made," Spatz said. "Not too many have been approved by the committee."

According to Williams and Spatz, reactions to the freeze have not been negative thus far. Spatz stated that the current economic climate made people realize that cuts were necessary to maintain a feasible budget. "I think people realize how serious the fiscal situation is," he said. "Government cutbacks have been happening on all levels. People understand that cuts have to be."

Weast's Aug. 20 memo also outlined other cutbacks in order to save money. Specifically, according to the memo, overtime salary compensation and temporary hires have been eliminated, except for emergency cases. In addition, the county cut back contractual renewals, froze the purchase of new school equipment and furniture except school buses and discouraged the additional purchase incentives with county money.
Still, certain expenditures have not been cut. The memo stated that minor supplies, teaching resources, travel reimbursement and essential administrative office supplies are still possible uses of the MCPS budget.