At 6:15 p.m. today, a female MCPS student crossing Route 29 (Colesville Road) was hit by a car driven by a Blair teacher. The student, who was not using the crosswalk, faces no life-threatening injuries, according to Assistant Principal James Short.

"The early prognosis was that it wasn't life threatening," Short said. An ambulance transported the student to an area hospital 15 minutes after she was hit and Blair administrators immediately notified her parents.

The teacher was turning north onto Colesville Road at the intersection of Colesville Road and University Boulevard next to the Woodmoor shopping plaza. The student ran east across the street about 25 feet from the crosswalk and was hit by the car, according to Short. 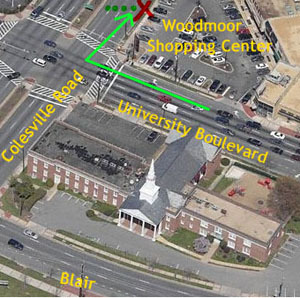 Photo: The accident occurred across the Woodmoor shopping plaza during a break in night school.

Photo: The accident occurred across the Woodmoor shopping plaza during a break in night school.

The student, whose name Short would not release, citing her minor status, earlier had been at Blair to attend night school. Although Blair night school is a closed campus, she and other students apparently left during the break between first and second period. No other students were hurt.

Short was not able to release the name of the Blair teacher whose car hit the student. Principal Gainous, the only administrator allowed to release the teacher's name, was unavailable to comment on the incident.

According to Short, a nighttime building services worker witnessed the accident when he was on his evening lunch break. He reported the incident to main office secretary Carrie Addison, who said she ran to the intersection and immediately called Short and the student's parents.

Short stressed the importance of using crosswalks to cross University Boulevard and Route 29. "It's one more incident that tells you that students should cross on the crosswalk," he said.