Dr. Jerry Weast, superintendent of MCPS for 12 years, will retire in 2011

In a statement released on Aug. 24, Dr. Jerry Weast announced that he will retire from his 12-year tenure as the MCPS superintendent. The Board of Education will choose Weast's successor after the Nov. 2 school board elections. 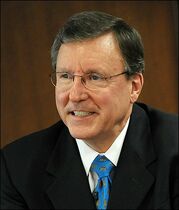 Photo: Jerry Weast has been the superintendent for MCPS for 12 years.

Photo: Jerry Weast has been the superintendent for MCPS for 12 years.

According to President of the Board of Education Patricia O'Neill, the difficult process of choosing Weast's successor will be complicated by the fact that four new board members will be elected in November. The nomination process will entail hiring a search firm to help recruit and screen candidates, but further details have yet to be fully fleshed out. "The fine points of the search will not be determined until the election is over," O'Neill said.

The new superintendent will face a county with a difficult economic situation as well, as Montgomery County is facing serious budget setbacks. Weast's successor will have to make important economic decisions without the considerable monetary resources that Weast was able to command. "Making things work with less is going to be the challenge," said O'Neill.

In his term, Weast struck a delicate balance of narrowing the county's achievement gap without hurting the higher-performing sector, according to O'Neill.

"He highlighted that we had two school districts," she said. "We had an affluent school system, the green zone, that was doing very well, and we had a red zone that didn't have enough resources to properly do the job of educating children."

The red zone and green zone were terms of Weast's invention, and to bridge the gap between the two areas of Montgomery County, Weast shifted resources. "He and the board reallocated resources, not taking away from the green zone, but doing what was necessary," O'Neill said.
Despite this, Weast commonly faced criticism for his methods as well as mixed opinions from many MCPS parents and teachers. In a 2010 article in The Washington Post, for example, Michael Birnbaum wrote that Weast "has a forceful personality" and, as a result, quite a few critics. O'Neill testifies to some public dissatisfaction with Weast. "He's arrogant, he's impatient, he's intolerant of people who don't do their job and I think that that's difficult for some people to deal with," said O'Neill.

O'Neill maintained that such accusations are inevitable: "Any superintendent anywhere in this country is going to have critics — it's part of the job." O'Neill is satisfied with Weast's performance as county superintendent. "He always did his best for the children of Montgomery County," she said.