The recommended budget includes an increase of $1.2 million from last year

The biggest fraction of the increase in the budget comes from an addition of nearly $6.9 million in professional salaries and wages. The majority of the increase is funded through local grants from the county. Last year, county funds totaled $1.7 billion. If the new budget passes through, county funds are expected to rise to $1.8 billion.

The budget, which will be in effect from July 1, 2020 to June 30, 2021, reflects MCPS' top priorities, including expanding access and opportunity for all, creating a safe learning environment and recruiting qualified staff to maintain a competitive edge. According to Deputy Superintendent of Schools Monifa McKnight, the county's goal is to prepare all students to thrive in the future. "'All' is a keyword in this equation. MCPS has a long history of achievement for many of its students, but not all. Data continues to show disparities in academic outcomes for our students of color and students in poverty," McKnight said. 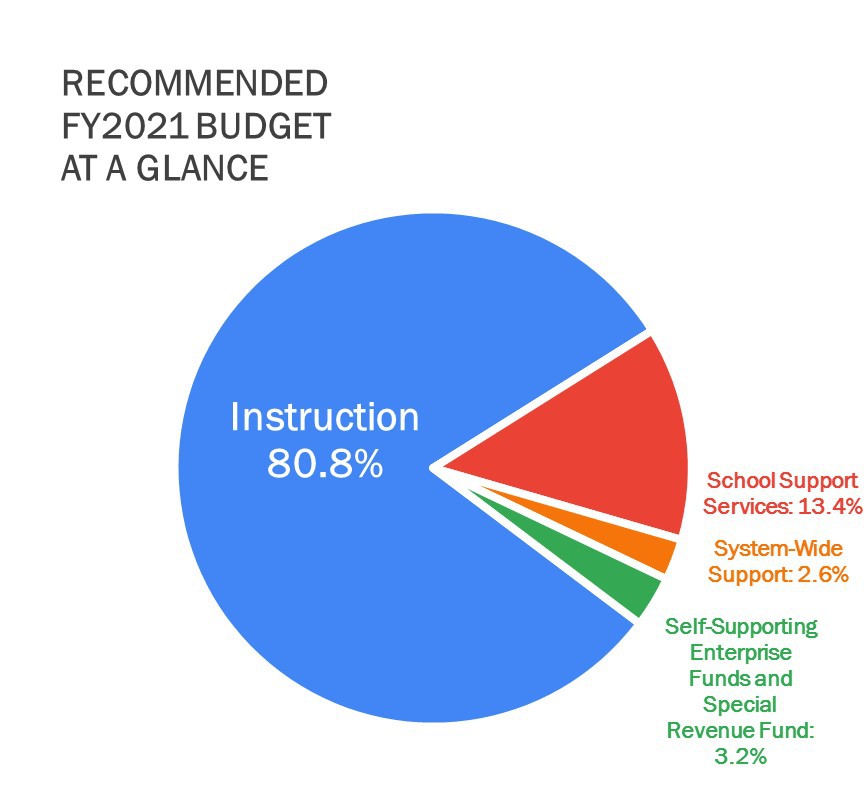 The budget also allocates resources for three new regional International Baccalaureate centers, a specialized team to recruit qualified teachers, an equity and innovation fund, more security staff and a new after-school supervision structure to keep students safe after classes are over. In addition, the plan puts in $14.2 million to open up approximately 82 positions for psychologists, social workers, instructional support teams for English language learners, special education and the extension of prekindergarten programs.

To make up for the $1.2 million increase, the budget includes a reduction of $5 million for the Employee Benefits Plan. According to Smith's proposal, "in the past three fiscal years, medical and prescription drug claims have continued to increase at a much lower rate than previously anticipated [and] subsidies for employees also have increased, resulting in additional revenue generated in the fund."

Going forward, the Board of Education will host work sessions and public hearings to finalize their recommendation for the 2021 operating budget, which will go through Montgomery County Executive Marc Elrich and the County Council. In June, the Board will adopt the official operating budget.