Measuring snow in pencils instead of inches

"Hey, it's supposed to snow next week! Do you think we'll have a day off?"
"Maybe; What does MoCo Snow say?"

During the winter months, conversations like this one can be heard throughout the hallways of most high schools in Montgomery County, and Blair is no exception. Until a few years ago, pre-snow day predictions involved nothing more than a quick weather check and an argument with friends. Since the creation of MoCo Snow, however, students can rely on a local gym teacher to make the call for them.

Alex Tsironis is a teacher, former Montgomery County Public Schools (MCPS) student and the man behind the pencil predictions. He works at the Blair Ewing Center as a physical education teacher and runs MoCo Snow in his free time. On his website, he describes his motivation for creating the blog. "I created MoCoSnow so that students and parents have a place to go to see the latest and most simplified weather forecast for Montgomery County, MD," writes Tsironis. 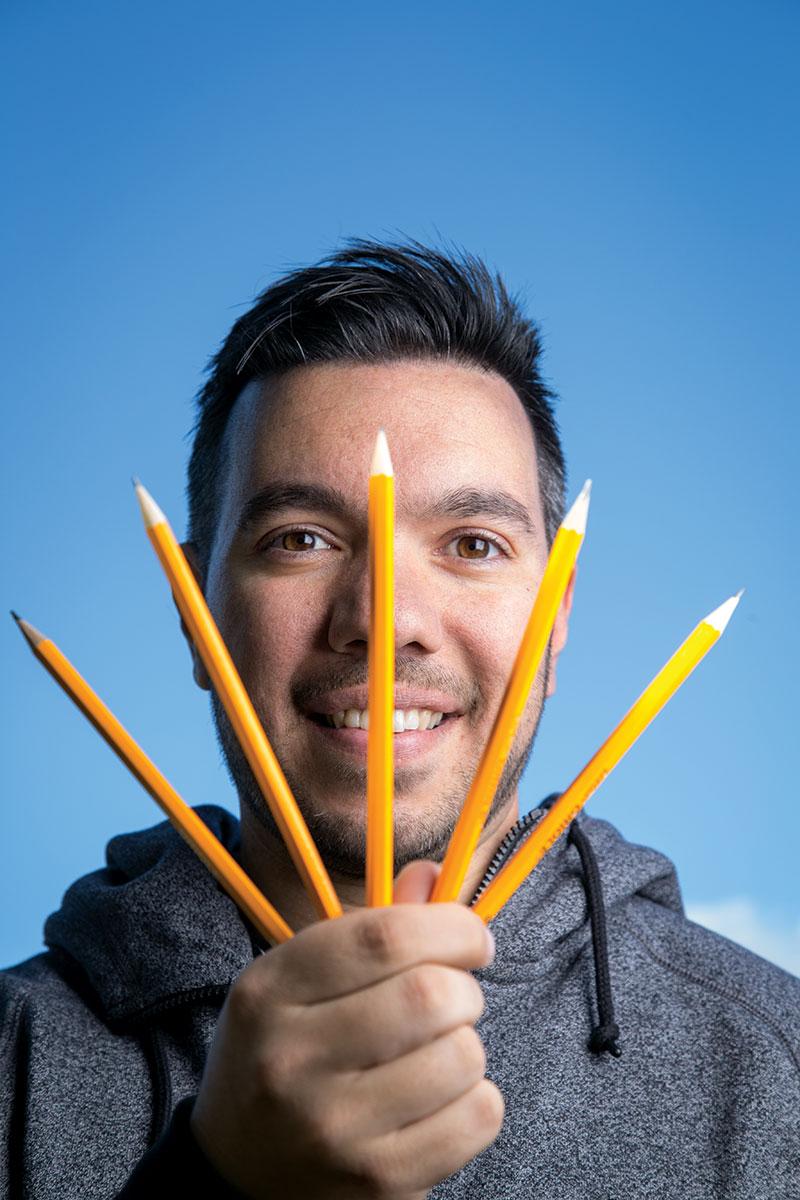 Photo: Alex Tsironis is the man behind the pencil predictions.

Photo: Alex Tsironis is the man behind the pencil predictions.

Having been an MCPS student himself, Tsironis has experienced the anticipation students feel before a potential snow day. He decided to help by providing informed predictions with more accuracy than the baseless guesses that students usually go by. This way students don't have an excuse not to finish their homework, but are still able to experience the excitement that snow brings. "I do my best to provide everyone with consistent and accurate information across many different platforms (the website itself, Twitter, and Facebook), and always try to add a little bit of humor when interacting with everyone," Tsironis says.

MoCo Snow began on a bulletin board in the hallways of Roberto Clemente Middle School in Rockville. From there, it expanded into a Google Blog, a Weebly site and eventually the independent website it is today. "It officially started as a small Google blog in 2011 because students that couldn't see the bulletin board I posted it on or students that went to high school wanted to know my prediction," Tsironis remembers. When his Clemente fans graduated, they told their high school friends about MoCo Snow, and it grew quickly through word of mouth and online interactions. "It really started expanding when I put it on social media in 2014. That's when teachers, students, and parents started getting way more involved," Tsironis explains.

Since its online inception in 2011, MoCo Snow has grown exponentially. Today, the account has almost 13,000 Twitter followers, 10,000 Facebook followers, and 1,500 email subscribers. It continues to expand every time winter comes around; this year, the first snowstorm of the season brought in over 1,000 new followers, with 500 on January fifth alone. To Tsironis, MoCo Snow's success came as a pleasant surprise. "I always expected it to gain popularity, but never to this extent," he says happily.

Behind the Pencil Prediction

Whenever snow appears on the weather forecast, Tsironis is quick to address it on his Twitter account. Most of the time, he prefers not to speculate about a storm over five days in advance because of how quickly forecasts can change. Once a storm gets closer, however, the predictions begin. MoCo Snow is updated using his pencil rating system. The predictions can vary from one pencil, which means school will most likely open on time, to five pencils, which means it's almost certainly safe to stay up late because there will probably be no school the next day. However, Tsironis encourages students to do their homework on time regardless of the pencil prediction, despite the impressive 96 percent accuracy that MoCo Snow boasts.

Photo: The site uses a five-pencil rating system to predict the likelihood of a snow day.

Photo: The site uses a five-pencil rating system to predict the likelihood of a snow day.

To produce his predictions, Tsironis tracks forecasts from different computer models, television stations and websites to put together what he feels would be the most accurate forecast. "The predictions come from comparing a storm to similar situations that have occurred in the past, checking various weather models repeatedly, and gathering any information I can leading up to the storm," Tsironis explains. In the past, MoCo Snow has also collaborated with meteorologists from local television stations, including Devon Lucie (formerly of ABC7), Howard Bernstein (WUSA9) and Mike Thomas (FOX5).

Since MoCo Snow took off, copycats have sprung up in other counties. Among these are FCPS Snow Predictions for Fairfax County (@FCPSsnow on Twitter ) and Howard County School Predictions (@HowardCountySchoolReport on Facebook). Apart from inspiring other counties to follow in his footsteps, Tsironis has become a local celebrity amongst Montgomery County students. "It's pretty cool to have kids recognize me when I'm wearing MoCo Snow gear. I've had families ask to take pictures with me and that was pretty awesome," he says.

MoCo Snow is also popular amongst teachers. To Tsironis, having faculty recognize and use his blog is a fun experience. "I remember the first time I had one of my former co-workers come up to me and tell me what the ‘MoCo Snow guy' was predicting for the next day. I didn't even tell her it was me," he laughs. MoCo Snow's most famous fan is arguably Joshua Starr, former superintendent of MCPS, who has tweeted to MoCo Snow twice this season. On January 5th, Starr tweeted, "Gotta say, I love MoCo Snow," in response to the first pencil prediction of 2017.

Even though Tsironis is the one who runs the blog, making his predictions as accurate as possible is a county-wide effort. "I think it's really cool that teachers look to MoCo Snow for the predictions, and it has helped a lot because many teachers and parents send reports from their areas that help make my predictions even more accurate," Tsironis says. MoCo Snow has evolved into something bigger than its original purpose; it has become a bonding experience and weather advisory for the entire county.