"Jumper." "Wanted." "The Incredible Hulk." Although "Push" may appear to share a storyline with these lamentable box office flops – all of which involve genetically enhanced super-humans fighting against a corrupt secret organization – this riveting sci-fi thriller is founded on a novel premise: Nazi experiments during World War II caused genetic mutations, creating a race blessed with supernatural powers. Despite needlessly complicating the plot, the directors of "Push" succeed in transporting the viewer to an engaging fantasy world filled with intrigue and deceit.

"Push" follows the story of a group of American expatriates living in Hong Kong who are endowed with supernatural powers that range from telekinesis to mind control. Cassie Holmes (Dakota Fanning), a teenage "watcher" with visions of the future, convinces Nick (Chris Evans), an adult "mover" capable of levitating objects, that they are destined to overthrow a clandestine government agency known as Division. Led by the sinister Henry Carver (Djimon Hounsou), Division was created to capture and use super-humans as military weapons, after further enhancing their powers with drug injections. 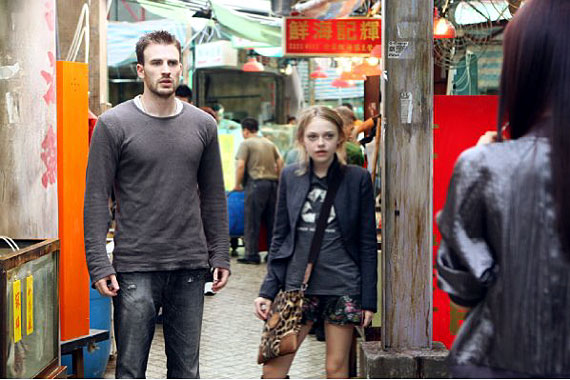 Kira Hudson (Camilla Belle), a talented and drug enhanced "pusher" who can control others' thoughts and actions, escapes from Division, in hot pursuit. Meanwhile, the Yamanouchi family, a separate party, seeks to use Division secrets to augment their own powers. Gant and Holmes join forces with other supernaturals to rescue Hudson, fend off the Yamanouchi family and destroy Division once and for all.

Throughout the movie, the audience struggles to reconcile their sense of awe at the existence of this enticing fantasy world and their mounting skepticism at the events that unfold – each plot twist more unlikely than the last. The quick cuts of Holmes and Gant running to escape the Yamanouchi family in the local market amidst torrents of water bursting from shattered fish tanks has undeniable entertainment value, but the plot is so convoluted that the viewer is often left utterly overwhelmed. There is also some doubt as to whether Gant, a second-generation mover whose talents have decayed to the extent that he can't even move a dice to win a gambling bet at one point, is strong enough to lead group of much more talented super-naturals.

Dakota Fanning makes a smooth transition from her child roles in "Man on Fire" (2004) and "War of the Worlds" (2005) to the fiercely independent teenage self in "Push." She brings humor and compassion in her role as Holmes, delivering strongly worded retorts to match the rebellious red streaks in her hair and bold black boots she wears around the city.

Chris Evans builds on his critically acclaimed performance as the Johnny Storm in "Fantastic Four: Rise of the Silver Surfer" (2007), forging a close-knit relationship with Fanning - almost like a supportive father figure - that gives the film emotional depth. Gant's role as the leader of the supernatural rebels and mastermind of the brilliant plot to undermine Division would be more convincing, however, if he brought a little more charisma to the screen.

What really made "Push" special are its visual effects. The stunning displays of Hong Kong's bustling city life - the tight, dingy back alleys, thriving fish markets and filthy, pint-sized apartments - combined with an artistic brand of video editing, are what separates this film from duds like "Jumper" and "Wanted." Jerky camera movements and slowed down computer graphics highlight every gunshot, punch and kick exchanged between Gant and his Division rival Victor Budarin (Neil Jackson). The sweeping cinematography of the vibrant city atmosphere makes this film stand out against the rest. Shots of bright fluorescent signs illuminating storefronts and myriad colored rags hanging over balconies in run-down apartment buildings dazzle the viewer, bringing the movie a real cosmopolitan feel amidst the supernatural.

What "Push" lacks in plot continuity, the film more than makes up for it with a veteran cast, thrilling fight scenes and a lively cosmopolitan backdrop. Movie-goers who were intrigued the first time around will be eagerly anticipating the release of a sequel - a welcome respite from schoolwork and friend drama where one can escape into pure fantasy.