"Mr. & Mrs. Smith" is the perfect summer movie. The ridiculous plot, the cheesy dialogue and the sex appeal of its two explosive stars combine perfectly to make one fun ride.

John Smith (Brad Pitt) is an assassin who kills high-level officials. This bad boy has a garden shed full of guns and enough tricks up his sleeve to pull off his hired hits despite his constant clumsiness. His wife, Jane Smith (Angelina Jolie), is also an assassin, but a much more efficient, deadlier version of John. They discover each other's true identities after they're assigned to the same mission. And because they're competing assassins, they of course have to kill each other. 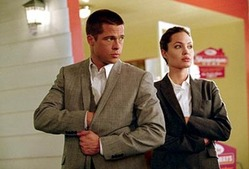 The plot is stupid. Audiences know that right off the bat. The real reason people are going is to see Pitt and Jolie in action. Two of the world's most gorgeous people flaunting their sculpted figures? Count me in!

And there's plenty of flaunting going on in this film. Filmgoers rest assured: you will see plenty of Jolie in this movie. Apparently, being an assassin requires various revealing outfits to wear while killing the target. She must be one talented killer if she's able to make all her hits while wearing six inch stilettos.

Pitt's character cuts a stark contrast to Jolie's; he's bumbling, silly and lackadaisical. Not exactly the traits you'd find in a hit man. It's a wonder he's able to do his job at all, what with his constant clumsiness and refusal to adhere to plans. Jolie's character is much more cold-blooded and efficient.

Vince Vaughn and Adam Brody both have small, funny roles in the film. Vaughn plays John's sad coworker who still lives with his mother and is deathly afraid of Jane. He's perfect as a pathetic man on the edge of hysteria. Similarly, Brody is great as the hit both John and Jane are supposed to make when they discover each others' identities. His smart-alecky attitude brings humor to the film.

The film needs some humor to break up the endless action sequences. Watching faceless enemies die by either John or Jane's gun gets old very fast. Pitt and Jolie are best when they're fighting together; the action scenes then are punctuated by humor. The best scene in the film by far is when they throw their guns aside and engage in a fistfight. It's a nice change from the constant barrage of bullets they rain on each other.

"Mr.& Mrs. Smith" is a lot like candy. It looks and tastes good, but it has no real substance.