What do the recent elections mean for Blazers?

Pep rallies, the blood drive, fundraisers and dances don't run themselves. Officers in the student government association (SGA) strive to ensure that students have the best possible high school experience possible. But who are the new faces behind the SGA?

Blazers vote for their officers once a year, but these students seem to disappear after the elections. They work hard to put on events for the school, but often do not get the credit they deserve. Next year's SGA officers are looking forward to serving the school and have many exciting events planned. 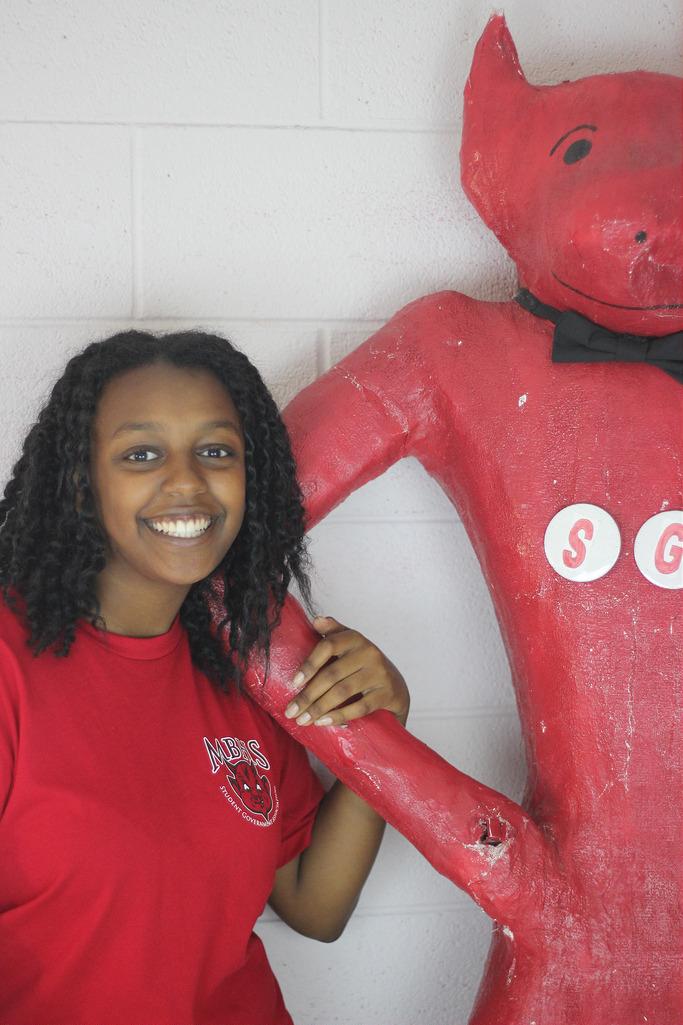 "If you never take a chance, your life will never change," Hana Bekele thought to herself as she applied for the position of SGA president. Whenever Bekele is faced with anything, her mindset is always to take risks. She first saw that quote on a billboard in New York. "It really just stuck with me. I now use it for everything. I just try and take a chance on everything," Bekele says, eyes twinkling. At first, Bekele was unsure whether she should put herself out there and run. It wasn't a quick decision. But as she became more absorbed in organizing events for the school, Bekele knew she wanted to embrace an even bigger role.

Bekele has dedicated her high school career to the SGA. She has been the class vice president since her freshman year, and was even involved in student government before coming to Blair. "I decided to continue my involvement in the SGA from middle school. I love the leadership opportunity that it provides for me," Bekele explains.

She has all kinds of exciting ideas planned for next year. Dances are fun, but Bekele believes that what Blair students really want is a full-scale carnival. "We can actually have fun rides and raise money. It's also going to cost money, but I think we can do this," Bekele says, nodding pensively. Being president isn't just a job for her, it's something she truly loves. She's looks forward to overseeing all of the association's operations next year.

Rising senior Caitlin Little is always calm and collected during a crisis. But don't let her chill demeanor fool you; Caitlin always gives the SGA her all. "I think that I can be vice president because of my experience in SGA and my work ethic," Little says matter-of-factly. She brings a reassuring presence to the organization, especially when they're pressed for time.

What really makes Little so effective in the SGA is her ability to work with her peers. The SGA is a very tight-knit group, and when they put their heads together, they can conquer anything. "We make a good team and we get a lot done and that's part of why I wanted to do it," she says. She also appreciates the real work experience that the SGA provides for her. "It teaches you how to be the boss," she says, laughing. Next year, she's going to be part of the executive board in charge of planning events and making sure everything is carried out efficiently.

Little is looking forward to "re-inventing" the SGA next year. In order to make the organization more effective, Little and the rest of the officers are already planning new ways to make their system more efficient. Changes to how assignments make their way down the chain of command will make it easier to have even more school sponsored activities next year.

One new event Blazers can look forward to next year is a fundraising night for human trafficking. Students will be invited to watch a documentary on the subject and contribute money towards activist groups. Little also plans to stage a movie night outside by projecting images directly onto the school wall. Little welcomes students at Blair to become more involved in what goes in the SGA. "We want to reach out to students and encourage student advocacy," she says. Mostly what Little wants to do next year is work hard and incite positive change.

Rising senior Joelle Nwulu is heading up operations next year. She's in charge of all the logistics. Her job is to make sure all the events run as smoothly as possible. She irons out the last minute wrinkles. Nwulu can draw parallels between the work she does for the SGA and her experience on the soccer pitch. She always has time for both of her passions. "I love soccer, but I always make time for Blair and SGA, and it's a lot of fun," Nwulu says with a laugh. She originally joined the SGA back at the beginning of the school year to work on her leadership skills, and she really feels she's come a long way.

Nwulu wants Blazers to recognize the SGA's efforts in making sure everybody has a good time. Next year, Nwulu is going to be working on improvements to the pep rally and the blood drive. "We came up with a system in which we all work on events that we have worked on before because we already have a background. It works better that way, too," she explains. Nwulu's number one goal for next year? "Make everything as fun as possible," she says confidently. 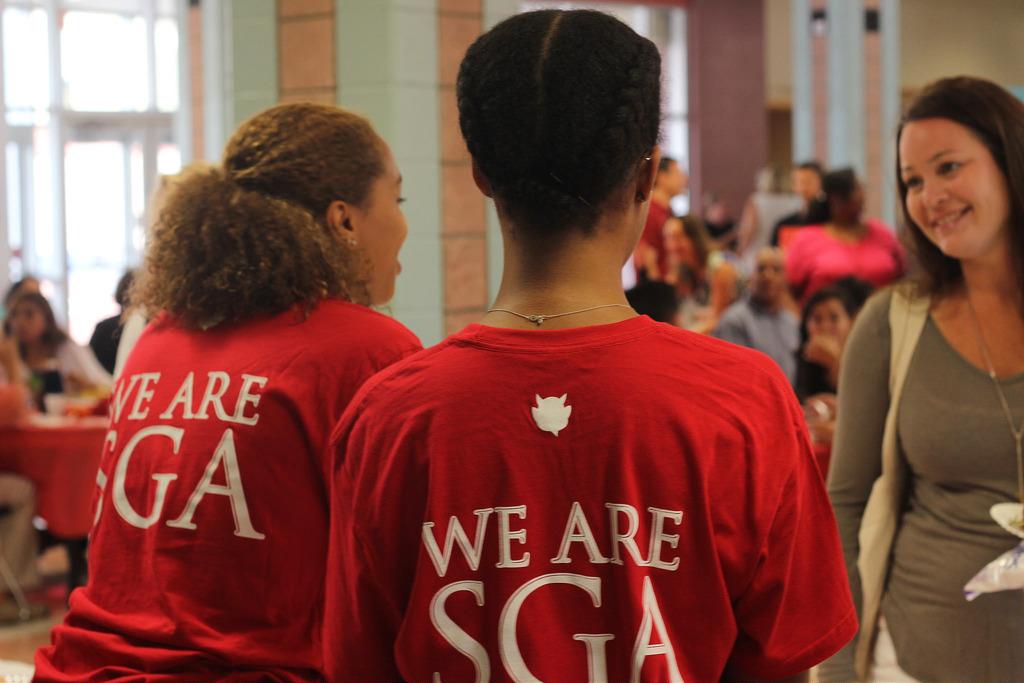 Photo: Meet the faces of next year's officers for SGA.

Photo: Meet the faces of next year's officers for SGA. Photo courtesy of Flickr.

The fashionable and funny Fatu Kposowa will be the ultimate support system for the SGA next year. She'll be aiding all of the other SGA executives in whatever way she can. Her main job will be helping out in the classroom and helping decide what needs to be changed. "Our vision next year will be a lot more structured with a lot more community based things," Kposowa says. The SGA is probably best known for putting on the homecoming dance, but Kposowa wants to contribute more to the school.

Kposowa originally joined the SGA to enhance her leadership skills. She strongly believes that she can help the school. "A favorite class of mine was human rights. I'm very passionate about human rights, which I think translates into my want to help people in general," she says with a solemn nod. She didn't originally have much interest in the subject, but she's glad she decided to take the class. She considers the SGA a team that anyone passionate about the school can join. "I love building on myself and working in groups for the school. It's been a great experience," she explains. Needless to say, Kposowa is looking forward to next year.

Ending High School with a Bang

Senior class president, Yuchabel Sanon, is ready to get to work. She's spunky, proud and unafraid of having her opinions heard. Her presence never goes unnoticed in a room. "I love being a leader. I know how to get my voice out there, and I'm ready to," Sanon says determinedly. She has made it her mission to make sure that the 2017 graduating class does not go unnoticed. "After high school, we're nobodies again, we're freshman again. This is our chance to get our name out there. It's our last year!" she shouts with excitement.

Sanon has planned car washes and other fundraisers to raise money for prom and senior shirts. "Not only could we raise money for our class, but everyone could get student service learning hours and bond with each other," she says. Her biggest idea so far involves the senior t-shirt design. No senior class has ever incorporated silver into their class shirts, and Sanon plans to make this one the first. "There's a big hashtag on Twitter called 'It's lit'. I want our shirts to say that, but with the 'i' as a '1' and the 't' as a 7, and these letters should be glittering in silver," Sanon explains. Sanon is dead set on making the whole year as lit as possible.

Alongside Sanon, rising senior Kye Keely will serve as senior class vice president. He has a more relaxed point of view going into next year. He feels gratitude for Blair after his three years here and that it is his duty to give back to the Blair community. This will be his first time in the SGA, but Keely is confident that he'll be able to make the graduating class of 2017 the "freshest class" Blair has ever seen. "That means fresh apparel, fun dances, things like that. That means fundraising for our class and allowing for a bigger budget for events like prom and t-shirts," Keely clarifies.

He believes that his entrepreneurial attitude, love for his fellow students and incandescent shoe game will help him achieve success during his time in office. "I also drink purified water everyday," Keely adds, chuckling. Keely lives every day like it's the best day of his life, and that's exactly the kind of mentality he wants to share with every single Blazer.

If there's one greater message shared by all of the new Blair officers, it's this; get pumped, Blazers! The students behind the SGA have big plans, and they intend to put them in place as soon as possible. Next time you're at a school dance or wearing an awesome Blair t-shirt, be sure to remember the students that brought it all together.