Men in Black: International is where humor comes to die

The fourth installment in the series is an international disappointment

"The universe has a way of leading you to where you are supposed to be at the moment you are supposed to be there," Agent T (Liam Neeson) says knowingly. But Men in Black (MIB): International is far from where audiences should be as they peruse the wide selection of films at the nearest theatre. Filled with mediocre jokes and a predictable plot, MIB: International is lacking in zest compared to its predecessors.

Unlike the three previous installments of MIB that were directed by Barry Sonnenfeld, International showcases a new director, F. Gary Gray. With Gray comes a new set of actors and a totally new kind of (lame) humor and (lame) charm.

The film opens as young Molly (Mandeiya Flory) awakes one night and notices a cute, young alien stumbling across her room. In the blink of an eye, MIB agents are at the door, hoping to pinpoint the whereabouts of the small creature.

Agent H (Chris Hemsworth) and High T, the two most decorated MIB agents who saved the world from a Hive alien attack years ago, provide the backdrop of the story. Grown-up Molly (Tessa Thompson) tracks down the MIB in search of the "truth" of the universe.

One day, she successfully locates MIB agents, and after a mild interrogation, is stripped of her former identity, accepted as a probationary agent and renamed "Agent M." After meeting the charming Agent H, Molly pairs up with him to escort an alien ambassador. But little do Agents H and M know that the seemingly simple task will unlock the secrets of an intergalactic attack, one that may hold its roots in the MIB itself.

Traditionally, the role of the protagonist in MIB has been to provide comic relief in the midst of a somewhat serious storyline. Back in 1997, the comical Will Smith and foil Tommy Lee Jones reigned over the MIB enterprise, which boasted an irresistible plot. Though Agent H and M bring back memories of the successful Hemsworth-Thompson duo in Thor: Ragnarok, that is about all that can be said about MIB's newest addition. With a windy and predictable plot, International milks Hemsworth-Thompson chemistry to get the movie going.﻿ 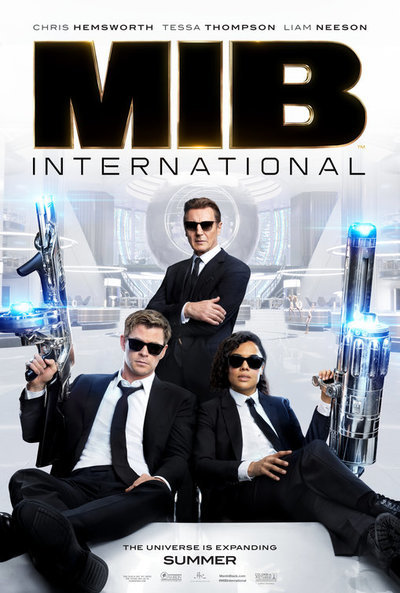 To add to the mediocrity, Agent H, who acts as a tagalong for Agent M, gets too much screen time. Since Agent H does not add much to the team's brainpower, one would expect him to be at least skillful in fighting prowess — but even in that, Agent H is lacking. All of the main action and thinking is done by the woman in black, Agent M.

One of the few strengths of the movie is the cinematography done by Stuart Dryburgh. The computer graphics depicting futuristic alien technology are quite realistic. Adding to scenes rooted in Middle-Eastern streets and vast deserts, editor Hamilton Sterling brings sound effects to life.

With a mix of mundane humor and a roundabout plot, MIB: International falls behind all previous installments of MIB. In short, for young ones looking for the next graphics-heavy film, this is the movie to watch. But for older fans of MIB, save your money for another showing, unless, of course, it's family night.

Men in Black: International is rated PG-13 for sci-fi action, some language and suggestive material and is now playing at AMC Wheaton Mall 9 and Regal Cinemas Rockville Center 13.