On May 8, we became less of a country as North Carolina passed a constitutional ban on gay marriage. Instead of America, we should drop the "A" and call ourselves "'Merica," a crude and tacky denomination of our country that better reflects dogmatic beliefs getting more weight than public opinion. With North Carolina's amendment, we give one more reason why European nations such as France, Portugal and Sweden think we're dumb. 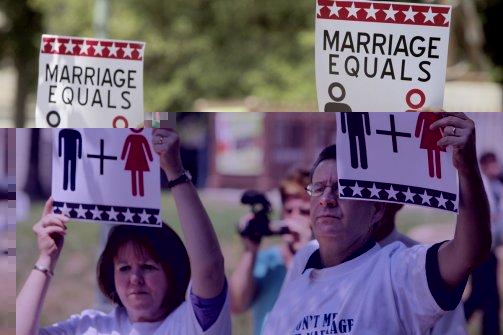 North Carolina's ban on same-sex marriage is disgusting, as it openly writes discrimination into the state constitution as if we never left the days of Jim Crow. Critics of same-sex marriage confuse their faiths and beliefs with what is supposed to be fundamentally given and that is the root of the problem; the religious elitism that runs through the veins of our policymakers. When these critics see, hear, breathe, touch or even smell something that is outside of their comfort zone, they just can't wait to say how offended they get when someone else has a different opinion. "Someone doesn't like using Google Chrome and uses Internet Explorer? Suspend their Habeus Corpus!" This is no better example than the politicians in the 1950's that created separate institutions based on color, but at least they had the courtesy to give them the right to marriage.

Critics also say that same-sex nuptials violate the sanctity of marriage, so there isn't any reason not to ban divorce as well. Ironically, a lot of heterosexuals treat marriage as a religious institution that binds two couples happily ever after, but can't deal with the ramifications of divorce and treat it as a civil institution that wrestles over the division of assets and property. At least in the United States, marriage isn't treated as seriously as it used to, so what's left to desecrate when we let in same-sex couples get married? In fact, because it's much harder for gays and lesbians to get married, same-sex couples would probably cherish and respect the concept of getting married more than most heterosexual couples out there. There just isn't a single bit of logic or sense in giving marriage to heterosexual couples that want to sign prenuptial agreements but denying it to same-sex couples that actually understand and weigh in the huge responsibilities of being married.

While Lesbian, gay, bisexual and transgender (LGBT) communities are certainly angry over this amendment, they aren't the only groups outraged. Many actors and high-profile celebrities took to the interwebs to decry North Carolina's amendment. Comedian and actor Seth Rogen was one of the many celebrities outraged on Twitter after North Carolina passed the law. "Claiming that someone else's marriage is against your religion is like being angry at someone for eating a donut because you're on a diet," he Tweeted. I see what you did there Rogen. Well put.

With the amount of outcry and reasoning against this constitutional amendment, it should get appealed to on the federal level so we can fix this injustice. However, with the amount of bipartisanship in our Congress, it might be some time before anything actually gets done. Until then, it would make sense that only in "Merica" do we acknowledge the violation of civil rights with the constitutional ban and it knowing that North Carolina has become one more state out there that is holding us back as a nation.