Two Metro buses collided on University Boulevard near Brunett Street this morning at around 7 a.m. A total of 26 people, including eight Blair students, sustained minor injuries, according to Metro spokesperson Reggie Woodruff.

The collision occurred when one of the buses stopped suddenly and was struck by the other from the rear, Woodruff said. 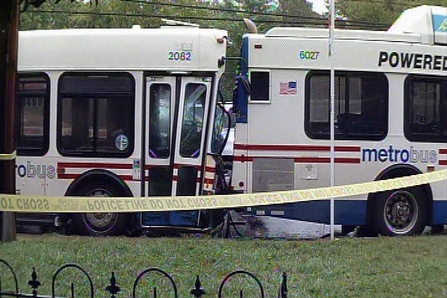 Photo: One Metrobus rear-ended another this morning around 7 a.m. and held up traffic and school buses in Silver Spring.

Photo: One Metrobus rear-ended another this morning around 7 a.m. and held up traffic and school buses in Silver Spring.

Principal Darryl Williams, Assistant Principal Edith Verdejo and several members of the security team reported to the scene immediately after the accident to see the involved Blazers. According to Verdejo, none of the students was seriously affected. "They were a little shaken up but they were fine,” she said. The students were transported to Holy Cross Hospital.

The accident also caused traffic issues around Four Corners, causing many Blazers to arrive to school late. Senior Dennis Chae was riding a school bus that was held up while passing the scene of the accident and did not arrive school until around 8:45 a.m. "Everything looked so chaotic,” he said.

Williams wrote a letter sent through Edline and the Blair listserv to inform parents of the accident.