The Washington Metropolitan Area Transit Authority (WMATA) may raise both rail and bus fares beginning in July to support its $116 million budget increase for the next fiscal year. If approved by the WMATA board, the increases will simplify fare charges and increase funds for improving the transit system and decreasing delays. 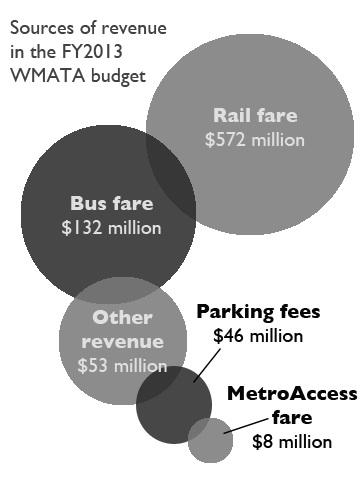 Photo:
The increased rates would most directly affect those using paper fare cards. They would pay a $6 flat fare during peak hours and $4 during nonpeak hours, as opposed to the current fares which vary based on the number of stops a customer travels. SmarTrip users would see an average five percent increase in costs to ride Metro trains, and a ten cent increase for buses. Bus riders paying in cash will see their fares increased to $2 for local buses and $4 for express buses.

The peak-of-the-peak system, which increased rail rates in 2010 for busy morning and evening hours of operation, will be eliminated altogether. Riders during high-traffic periods will pay fares consistent with the regular weekday price.

According to a Jan. 12 WMATA press release, the increased rates are part of the $1.6 billion budget and plan to improve WMATA infrastructure and equipment. This will be done by replacing old tracks and switches, in response to recent technical problems and construction needs. About half of the $116 million increase will go toward improvement projects. "The proposed operating and capital budgets allow us to further enhance safety, continue the rebuilding effort, and advance important service enhancements, such as increased preventive maintenance of escalators,” said the Metro General Manager Richard Sarles in the press release.

The remaining $61 million of the budget increase will go to supporting the company's expansion and regular operation, including hiring the 1,000 new WMATA employees that are included in the 2013 budget, according to the Washington Post.
The cost of the increase would be shared between Metro users and the eight jurisdictions, including the state of Maryland, that fund transportation projects. "Better is not free. And as we are playing catch up and building a better Metro that benefits all our stakeholders, we are asking everyone to contribute,” said Sarles in the release.

Public hearings on the budget will be held in February and March and the proposal will be voted on by the board by the beginning of their new Fiscal Year in 2013.

For Blair students who use the Metro for weekend trips, the changes may be more significant than for those using it for daily transportation. Most students use their student IDs for daily bus rides, and sophomore Senaie Halle believes the change will not affect him considerably.

Senior James Syverson and Fen Kemp agree that the increase to $2 in bus fares for students without SmarTrip cards wouldn't affect them despite their regular use of the bus. "A lot of people just pay $2 anyway,” said Syverson.

Junior Sam Blattner and sophomore Liam Lewter agree that the hikes would be worth it if they can reduce delays and improve the system's infrastructure. "I don't mind. It's an organization and they need the money, plus it would be awesome because the Red Line sucks and if they're making it better, I wouldn't mind paying the extra ten cents,” said Blattner.