An earthquake brings heartbreak in Haiti

Late afternoon, on Jan. 12, junior Ruben Dumay's sister delivered a shocking piece of news to him: An earthquake had struck Haiti, their home country. Her tone of voice lulled him into disbelief. The cries on television and photos on the Internet soon revealed a new reality, though: The earthquake had been a lethal, 7.0-magnitude catastrophe. Dumay wasn't sure what to feel. He trudged to school the next day, but when he returned home, he dammed the flood of media around him - television darkened, computer powered off - and collapsed into bed without speaking to anyone.

The earthquake that shook Dumay's world sent thousands of houses tumbling to the ground in the Haitian capital, Port-au-Prince, and surrounding areas on that fateful Tuesday. With the Haitian government's casualty estimates leaping toward 200,000, the earthquake is expected to be one of the 10 deadliest of all time. Before the earthquake, 70 percent of Haitians had no regular access to potable water and nearly four percent of the entire population was orphans, but the latest tragedy has plunged Haiti even deeper into the clutches of poverty. And for Blazers with family, friends or childhoods in Haiti, watching the aftermath of such a catastrophe has been a devastating experience.

Like Dumay, freshman Hulda Ferrier was shocked she turned on the television. Ferrier left behind many relatives when she immigrated to the United States from Haiti last June, but she was most concerned about her older sister. Ferrier agonized over her sister's fate nonstop. "I didn't know if my sister was alive or she's dead," Ferrier says. "I came to school, I cried and cried." As she struggled through the uncertainty, her teachers tried to console her. "[ESOL teacher Ailish] Zompa said, 'I'm sorry, I'm sorry, I'm sorry,' " Ferrier says. Finally, three days after the earthquake, Ferrier's sister called to say she was okay, alleviating a world of worry. 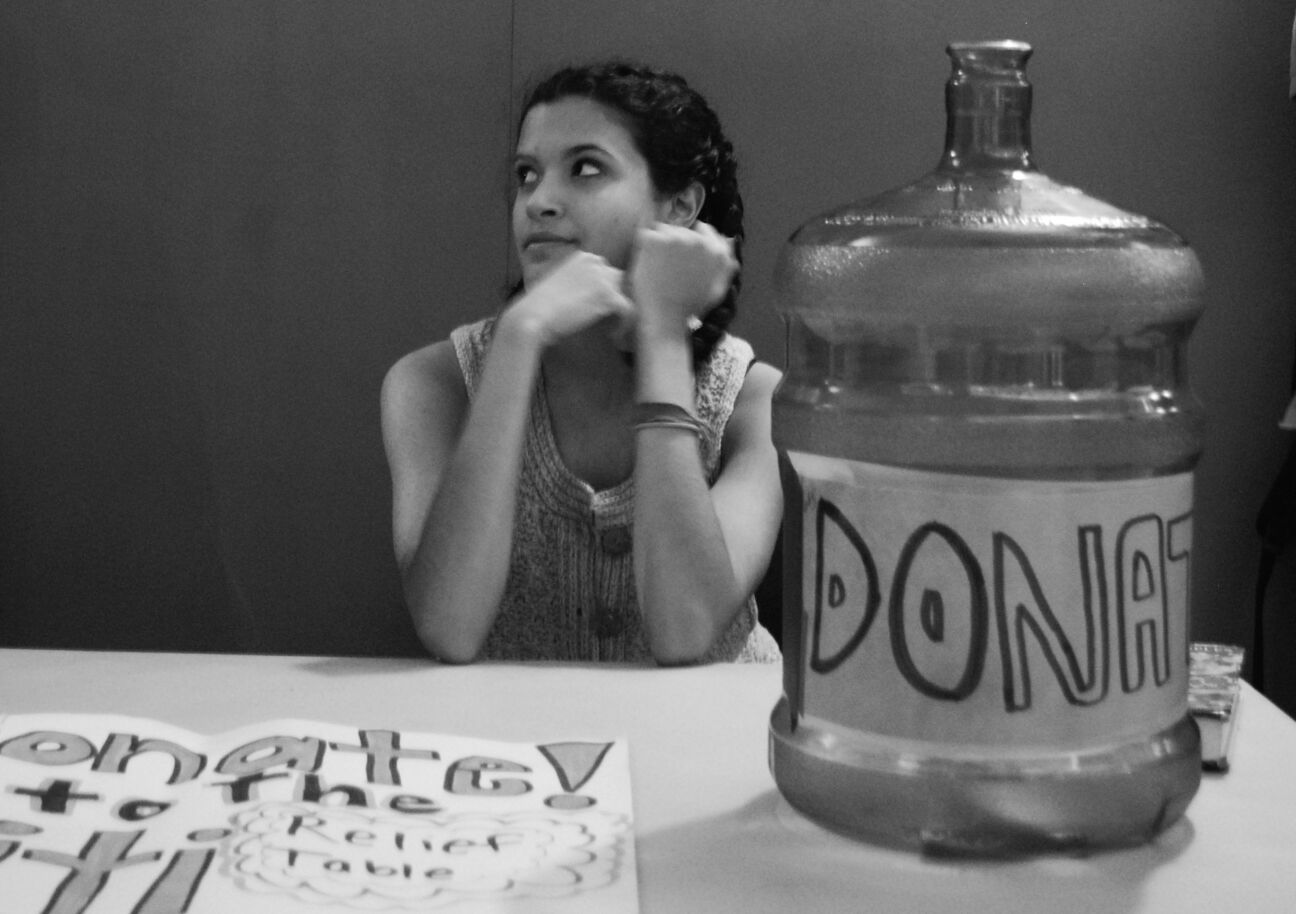 Photo: Junior Sacha Langer collects donations to send to earthquake relief in Haiti. Langer's father survived despite the collapse of his Port-au-Prince house.

Photo: Junior Sacha Langer collects donations to send to earthquake relief in Haiti. Langer's father survived despite the collapse of his Port-au-Prince house.

Along with teachers like Zompa, the Blair counseling department, meanwhile, worked to help them cope. English for Speakers of Other Languages (ESOL) counselor Diana Blitz says that counselors reached out to Haitians in the ESOL program, including Ferrier, to provide emotional support after the earthquake. "Immediately, we check and see which students of ours are from Haiti," she says, "and let them know that we care about what's going on. And then we check up on them and keep tabs on them - let them know that we're here with them."

Junior Sacha Langer, however, didn't have the support of the ESOL program. Buoyed by the hope her Haitian father was alive, she instead dealt with days of anxiety with less of an emotional outpouring. Before she and her mother found out, she says, they held stress at bay by waiting quietly. "I was just sort of in shock," Langer says. "I wasn't that upset, though, because I didn't think he'd be hurt. My mom was really quiet, and she was listening to the radio all day. We didn't really talk about it very much." After a couple of painful days, the call finally came through: Her father was safe.

As Ferrier and Dumay found out the fates of their loved ones, the news brought mixed emotions. Most of Ferrier's family was safe, but she had lost one of her father's cousins. And although Dumay soon found out that his close family members were fine, he still didn't know about many of his friends and cousins about a week after the earthquake. "They could still be under the houses," he says. "There's no news about them. We called but there's no answer."

To deal with the uncertainty, Blazers have sought solace through such support systems as friends and family in America. Dumay has turned to religion to guide him through the past few weeks. He says that many of his friends from the Christian Club have helped him through the situation by offering spiritual support. "They keep me in their prayers," he says, "and sometimes we talk about it and try to make it a little clearer. And always keep my connection to God."

Some have leaned on loved ones to manage the stress and emotions. Ferrier and her family in Silver Spring talk with each other and saturate their household with an influx of media information. Langer, on the other hand, absorbs the news reports less enthusiastically, tuning in primarily to support her mother. "I've been listening to the radio every night," she says. "I don't actually like doing it, but my mom does, so I have to." Though she listens to the news externally, she has also built an internal wall to stanch her fears. "I just didn't think about it, mostly. A lot of the time, when I'd hear about it, I'd try to pretend that my dad wasn't there," she says.

Alan Nathan, an area clinical psychologist and a clinical psychology professor at Argosy University, says that such internal devices can be effective if they are part of a teenager's coping mechanisms. "You have to respect the person's privacy and coping strategies," he says. Nathan also notes that, above all, honoring the wishes of someone dealing with extreme suffering is essential, even for teens that have undergone ordeals from afar. "It can be just as traumatizing to experience the event indirectly, particularly if you have loved ones that died or you can't contact," he says.

Distraction and distance from that suffering have also become mechanisms for some Blazers' coping with the earthquake. By hanging out with friends and playing with younger cousins, Dumay is able to avoid the tense atmosphere at home. There, his father bombards him with constant talk of the earthquake's aftermath, he says, while his mother remains in a fragile emotional state. "Every time I start talking to her, she starts crying, and I don't want to handle the emotional stuff," he says. "When she starts crying, it's like a wound. Nobody likes to see their mom cry."

The tools to move forward

At the same time that these Blazers and their families are experiencing turbulent emotions, however, many of their loved ones in Haiti remain in a perpetual struggle for survival. Ferrier describes the predicament of her family in the southern city of Corfu: Sleeping on the ground outside the rubble of their homes, her loved ones are still struggling without clothes or shelter. Afraid to find food or water because of the constant fighting and looting, they are starving. And for Ferrier, the injustice she sees on TV and hears about from her family is difficult to handle. "The dogs walking past the people [on the ground] - it's not good, it's not fair," she says.

Dumay says he feels that some of the aid groups are hindering the suffering Haitians, leading to conditions like the despair that Ferrier's relatives are living. When Dumay sees helicopters dropping food over Haiti on television, he worries. He believes that the random distribution of supplies foments violence by inciting aggressive competition to reach the food. "They're doing more harm than good. That's just making matters worse...Make sure every person has at least something to eat," he pleads. 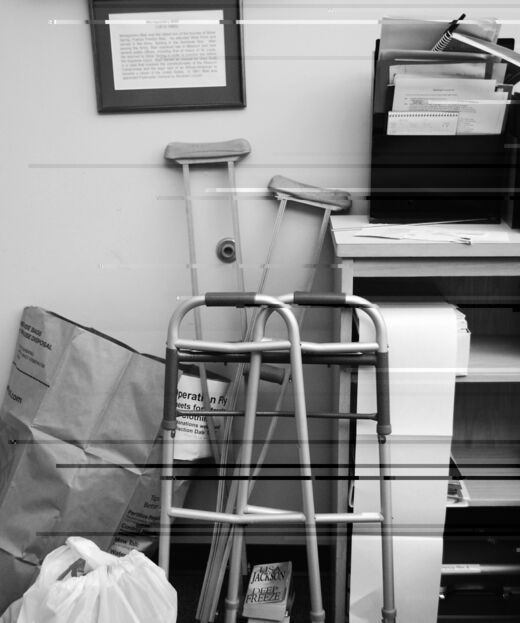 Photo: The media center is collecting crutches and walkers for humanitarian aid efforts in earthquake-torn Haiti.

Photo: The media center is collecting crutches and walkers for humanitarian aid efforts in earthquake-torn Haiti.

A series of powerful aftershocks over the past few weeks has exacerbated the Haitians' plight. On Jan. 20, the day of a 5.9 aftershock - the worst yet - Dumay fell into another state of shock. "Numb," he replies when asked how he feels. The desolation of his nation's condition strikes at his heartstrings. "An earthquake just happened, and then another one happened," he says. "It's so frustrating to see a country that you loved - a country you were born and raised in - crumble to pieces." Although the wreckage of his country saddens him, Dumay is also relieved to find out, days after the aftershock, that most of his friends and cousins are safe.

Langer didn't hear from her father for a few days after the Jan. 20 aftershock until he called to say that he has access to water but is still living outside. Langer, meanwhile, has overcome the initial denial she enacted to cope with the earthquake. Now, she feels optimistic that he will emerge from the disaster safely.

According to Sherri Porcelain, professor of global health and world affairs at the University of Miami, the earthquake has unveiled Haiti's infrastructure issues but also offered an opportunity for the country to progress, if it receives enough support. "A natural disaster of this magnitude exposes the inherent problems that exist in Haiti," Porcelain says. "I think if the leadership of the country and the people are part of the process, they need to be partners in development. The people really have to take hold of the initiative. They need the tools to move forward."

A similar sense of mild hopefulness has emerged in Ferrier, as well. She sees the devastation as a potential chance to rebuild, including the wreckage of her former school that she saw on television. "I know they have more opportunities to put the school back [up]," she says.

The looters that pillage Haiti's devastation anger Dumay when he thinks of the lessons his country should be learning from the earthquake. "They need to grow. They need to learn something. They need to see that that is not right," he says. At the same time, he agrees with Ferrier that the earthquake affords Haiti the opportunity to come back stronger than ever. He imagines a new, stronger Haiti. "To just be a country that is filled with love and strength and happiness, and [where] people don't have to be scared," he says of his vision for the future, "and everyone's worshipping God and throws away all the worldly things. Just let the earthquake take all of the stuff away and rebuild a new community."