The "Bangerz" artist performs for fans at the Verizon Center

The last time many of the then tween girls who filled the stadium on Thursday had seen Cyrus live was six years ago at the Verizon Center when she still sported her platinum blonde wig and went by the name of "Hannah Montana." Despite her complete shift in music and clothing (well maybe "lack of" rather than "shift" is the right word when it comes to clothes), her change seemed to be highly welcomed by the fans who filled the Verizon Center on April 10. Shirts with her face - tongue out like always- strewn across, could be spotted throughout the audience and even a Robin Thicke look-a-like , pinstripe suit and everything, made her way up to section 411.

At exactly 7 p.m., Icona Pop, singers of the infamous angsty teen girl anthem, "I Love It" dawned the stage, signaling the beginning of the Miley Cyrus concert.

Although the crowd didn't seem to know a majority of their songs, Icona Pop remained lively and pumped through their whole set.

Despite their excitement, many of their songs sounded similar and dealt with a lot of screaming rather than singing. However, their performance of "I Love It" was notable. By the crowd's reaction, it's clear that if they continue making comparable songs, they'll make it out of their "opening act" phase.

Even though Icona Pop made their timely debut, after a 20 minute set, there was about an hour long wait for Miley.

When the "Wrecking Ball" artist finally made her appearance, it was through a tongue. That one needs some explaining. Some say she was "vomited" onto the stage but she was really just sitting on a life sized tongue that then placed her on the stage in the least vulgar way possible. While most of Cyrus' "haters" for a lack of better word, look for anything to attack her on, this clearly wasn't the action to shake their heads at.

Miley did much more surprising and eye brow raising things that night. One act included a drag queen, making the tongue a pretty innocent and fun debut.In terms of singing, however, Cyrus proved the strong vocals she has despite critic's negative comments on her stage presence. Her live rendition of Dolly Parton's, "Jolene" was even more impressionable than her Backyard Session of it from years back when her brunette waves were always in a top knot and she epitomized the California look.

Apart from covers, which Miley is known for adding to her sets, a majority of the songs performed were off of "Bangerz," her most recent album. "My Darlin'" and "Love Money Party" were aided by the recording of the songs featured artists in the background and a life size bobble head of rapper Big Sean even came out for her performance of "Love Money Party."

Say what you want about Cyrus ditching her Hannah Montana look, but she made it clear that her childhood legacy will always be around in some way. Most of her performance had some country influence from the red gingham pattern she donned to the rendition of "Jolene" which kept its folk roots. 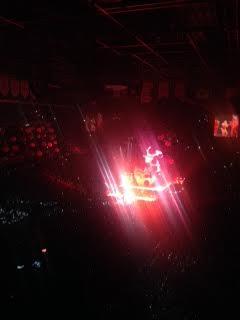 Photo: The "Bangerz" artist performs for fans at the Verizon Center.

Photo: The "Bangerz" artist performs for fans at the Verizon Center.  Photo courtesy of Temi Ibirogba.

Miley Cyrus is a tough act to follow. Not because she's so talented, which she is (her dancing, vocals and extras combined create a great performance) but literally because her style has evolved so many times. She's the most recent good girl gone bad after Brittany Spears and Rihanna. But while Spears tried to come back into the limelight as the mother figure well past her hair shaving days, Miley seems to be more of a Rihanna. The "Pour it up" singer is infamous for not seeming to care about what anyone thinks and honestly staying true to herself. Although these girls may not be the best role models, they never claimed to be - which is the key point.

So what's next? Will Miley go back to her Disney Channel days and tell us we've all been punked? Maybe she'll move away from the pop tunes and look more towards country and folk, what her vocals really seem to have an inclination for. Or maybe this is who Miley has been the whole time and the world just doesn't understand yet.

For now, all we can do is sit back and wait for her next album and decide if the next Miley Cyrus concert will be worth it.