"Million Dollar Baby": Worth every penny

In a jam-packed boxing stadium, the cheers and jeers of an exuberant crowd echo in Maggie's ears. From the stands, she watches the match with longing in her eyes as the boxer steps left, avoiding a punch to the face, then swings his right arm in his opponent's stomach. Right outside the ring is Frankie Dunn, the boxer's trainer, instinctively shuffling his feet and punching the air as if he were in the match himself.

After the fight, Maggie waits for Frankie outside. She tells him she's a boxer in need of a trainer, and asks him if he wants the job. Without hesitation, Frankie turns the offer down and walks away, saying that he'd never train a woman. Little does he know that's all about to change.

So begins Clint Eastwood's latest film, "Million Dollar Baby,” a film so carefully constructed and beautifully pieced together that it is nothing short of a masterpiece. An Oscar-winning director, Eastwood is an awe-inspiring storyteller and is at his best here. He's not the only one; Hilary Swank ("Boys Don't Cry”), who portrays Maggie, delivers another Oscar-worthy performance as the spunky female boxer with big dreams, and Morgan Freeman is perfect as a one-eyed ex-boxer who manages Frankie's gym.The story centers around three colorful characters: Eastwood's Frankie, an old boxing trainer whose dream is to take his fighter to the title match, Maggie, an energetic and optimistic thirty-something female boxer who dreams of being the best, and Freeman's Scrap, a once-glorified boxer who dreams of having just one more fight. The story is a bit melodramatic, to be fair, but Eastwood's masterful command of the material enables the audience to see past that because of the way the story is told.

When Maggie comes to Frankie asking him to be her trainer, Frankie doesn't just brush her off because she's a woman. He's got deeper troubles of his own; behind his often cocky, usually sarcastic personality is a man who is estranged from his daughter and lives in relative isolation. His letters to his daughter keep coming back unopened, and though we never really know what happened between them, it's clear that Frankie is in need of serious redemption.

Frankie's only real friend is Scrap, the live-in manager of his gym. The two have been together since Scrap's boxing days and know each other as well as they know themselves. Then comes Maggie. She's a wannabe boxer who Frankie immediately deems "too old” to ever make it to the top. Plus, she's a girl. It would hurt Frankie's reputation to train a woman, but that doesn't deter her from coming to Frankie's gym every day without fail to work on her punches and beg Frankie for training. One day Scrap finally convinces Frankie to take her on, and the three of them fight their way to the top of the boxing world.

The chemistry between Eastwood and Swank is remarkable and the driving force behind the film. Maggie immediately gives Frankie her devotion, respect and admiration; she's like a child spending time with a father-figure and idol in one. Slowly, Frankie comes to care for Frankie as if he were her own daughter, eventually realizing that he would do anything she asks him to so long as it makes her happy. Eastwood and Freeman, having worked together on "Unforgiven,” also have a believable bond as two friends who have been through the wringer together. 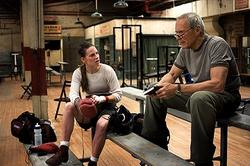 Because of the bonds between the characters, this film isn't just about boxing but relationships and certain aspects of human nature. That said, it has some magnificent-- yet terribly brutal -- fighting scenes. In one scene, Maggie takes a punch square in the nose, which breaks it; we can practically see it hanging loosely on her face. In a matter of moments, Frankie snaps it back into place. That's nothing, however, compared to the climatic fight for the title.There is very little wrong with this movie. It's told in a simple, straightforward way that is completely effective. The acting is superb; even Eastwood, who is a much better director than actor, varies his tone enough to create a unique and memorable character. Swank and Freeman deserve Academy Awards for their efforts. The story is inspiring and gut-wrenching at the same time. "Million Dollar Baby” packs quite a punch.

Melanie Thompson. Melanie Thompson is currently a junior in CAP and a page editor on Silver Chips. She enjoys hot baths, appearing aside famous stars in movies, and watching Agent Vaughn on Alias. A little known fact about Melanie is that she is a huge fan of … More »