Rare is the sequel that lives up to the original. "Miss Congeniality 2: Armed and Fabulous" had every right to fail horribly. It could have been two hours of overused humor spewed out by a bunch of overexcited characters – could have been, but wasn't. Instead, "Miss Congeniality 2" is every bit as hilarious and enjoyable as its predecessor. After all, failure is not a word in Special Agent Gracie Hart's vocabulary. 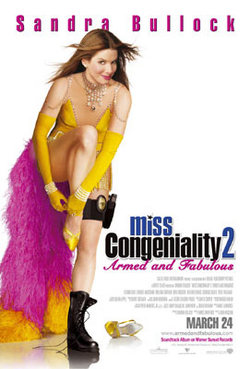 Photo:
A few weeks after her heroic (albeit not very feminine) rescue of Miss United States from a terrorist bomb at the televised pageant, Hart (Sandra Bullock) discovers that half of America recognizes her and that her career as an undercover field agent is effectively over. Frustrated and made even more discouraged by a recent break-up, Hart agrees to become the new "face of the FBI" and handle the Bureau's publicity. When Miss United States Cheryl Frasier (Heather Burns) and pageant emcee Stan Fields (William Shatner) are kidnapped in Nevada, however, Hart kicks into Special Agent mode once again and travels to Las Vegas to bring her friends safely home.

Part of what makes "Miss Congeniality 2" so successful is that it cleverly borrows memorable elements from its prequel without going overboard. Returning characters such as the syrupy and naïve Cheryl and the childishly upbeat Stan give the film even more lighthearted humor, and viewers will also appreciate the set of jokes that link "Miss Congeniality 2" to its prequel, among them the hairspray that stops swimsuits from "riding up," the S-I-N-G (solar plexus, instep, nose, groin) self-defense mechanism and Hart's unladylike tackle of potential suspects. The jokes, although recycled, have fresh twists that make them all the more amusing. Hart may have demonstrated S-I-N-G on a fellow agent and tackled an innocent man reaching for a cigarette in the first film, but in the second, the recipients of her enthusiastic physical contacts are none other than Regis Philbin and Dolly Parton. These incidents cause even more embarrassment for Hart and the FBI, especially when they are caught on tape and aired not only on CNN but also on Al Jazeera, and they create all the more humor for the audience to enjoy.

Besides the old, plenty of new quirks appear in the movie as well. One of the best additions to the film is Special Agent Sam Fuller (Regina King), an anti-social, violence-prone agent transferred out of Chicago who immediately starts off on the wrong foot with Hart. Much to Hart's dismay, Fuller is assigned to be her bodyguard as she travels to Las Vegas to handle the publicity for the case. Fuller's ever-present anger and disdain for Hart create hilarious situations, including arguments over iced venti caramel macchiatos and juvenile I-can-fight-better-than-you-can attitudes. Regina King forms a special chemistry with Bullock onscreen, and whether it's in one of their pesky squabbles or in their eventual friendship, Hart and Fuller make an amiable and unbeatable pair.

Above all, it's impossible not to applaud writer Marc Lawrence for his attention to detail. Minute features, such as the fat, burly kidnapper with a B.A. in Fine Arts and Stan's mother's (Eileen Brennan) mispronunciation of the word "slots," add frequent elements of humor to the film, so much so that it becomes impossible not to enjoy yourself. The movie's location in Las Vegas adds only excitement and a much-needed dose of chaos to the story, and the kidnappers' meeting on the enormous and chillingly high Hoover Dam gives the momentary suspense and thrill that the scene requires. Every detail seems well thought-out and well planned, and it makes an already enjoyable film even more hilarious and plausible.

In the end, the only disappointment comes from Gracie Hart herself. As the "face of the FBI," Hart lacks the unrefined, clumsy quality that makes her so unique and instead adopts a ditzy side that cares too much about her hair and fingernails. While Bullock shows off her skills as an actress and a comedian and while the movie is still altogether entertaining, viewers are left with a vague sense that the real Gracie Hart has disappeared. It is not until the second half of the movie that Hart regains her senses, and the audience welcomes back the real Miss Congeniality.

Despite this minor flaw, "Miss Congeniality 2" is altogether uproarious and delightful, filled with humorous moments to keep viewers amused, entertained and wanting more. It is, essentially, every bit what its title promises: it's armed, and very, very fabulous.