Blair's varsity boys' soccer team failed to convert key scoring opportunities, resulting in a 3-0 loss to the Springbrook Blue Devils. Blair fell for the third game in a row, leaving them at a disappointing 1-3-1 for the season.

The game started with both teams showing aggression on offense. Though Blair had a corner kick and a couple of chances near the opposing goal early in the half, including several strong plays from junior midfielder Greg Kohn, it was the Springbrook offense that struck first. After an offsides call against Blair, the Blue Devils were able to move the ball quickly upfield over the heads of Blazer defenders into the box for an easy score. 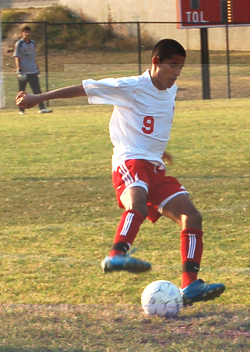 Photo: Senior captain Sergio Quisquinay traps the ball in a 3-0 loss to Springbrook on Sept. 27.

Photo: Senior captain Sergio Quisquinay traps the ball in a 3-0 loss to Springbrook on Sept. 27. Photo courtesy of Molly Brune.

After the early goal, the Blazers continued to stay on the defensive with senior goalie Jonathan Fortuna making tremendous saves and senior co-captain defenders Tim Visclosky and Jonathan Safer chasing down and clearing several balls. Head coach Adrian Baez tried to mix up their attack by inserting senior Jimmy Diaz into the game, but again, it was Springbrook who scored in the 28th minute off a cross into the box to take a 2-0 lead.

The Blazers ended the half on an offensive surge, but were still unable to score. During the 35th minute of the half, Blair had a series of free kicks taken by junior midfielder Hamed Marroquin from 20 yards out, but none led to goals for the Blazers. At the very end of the half, a turnover by the Blue Devils in their half of the field led to an opportunity for senior defender Ryan White, but a pair of Springbrook defenders were able to steal the ball before a shot could be taken.

The Blazers emerged in the second half looking to even the score. A cross by senior co-captain Sergio Quisquinay directly in front of the Blue Devil's goal found junior forward George Noubossie only two yards out of the goal, but Noubossie was unable to get a foot to the ball and the attack ended harmlessly.

The half persisted with both teams having solid offensive possessions but no goals, thanks in large part to great saves by Fortuna. Another opportunity for the home team came 16 minutes into the half when Kohn passed the ball to junior forward Wayne Henderson inside the Springbrook box. But Henderson was tripped by a Springbrook defender, although no foul was called. 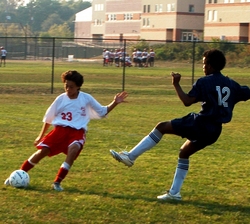 Photo: Sophomore Jamie Thomas sends the ball up the field.

Just as the Blazer offense began gaining momentum and trying to mount a scoring attack, the Devils struck again 33 minutes into the half with a rocket shot just out of Fortuna's reach, putting the score at 3-0 in favor of the visitors.

The Blazers had yet another scoring opportunity late in the game with a penalty kick awarded to Marroquin, but the shot went wide left of the goal. Though the second half saw a markedly improved performance, the final result was still a frustrating 3-0 loss.

The coaches were disappointed in the Blazers' overall performance in the game, but were encouraged by their second-half output. "We dominated in the second half," said assistant coach Howard Kohn, "but they were a very strong, fast, and physical team. Ours is more of a finesse team and we just could not compete."

Baez cites failure to score as the main reason for the loss. "We're not finishing," he said. "We need to put the ball in the net but we're just not there yet." Baez hopes to work on team cohesiveness to try to get the Blazer offense rolling.