Bunnies fly through the air from canons and slingshots as the whirring of hand drills reverberates through the repurposed gymnasium. The basketball court is now an arena occupied by hundreds of neon green wiffle balls and other game pieces, while 15 repair stations replace half of the bleachers. The audience waits in anticipation as players prepare to shoot balls into baskets, but these players aren't human. Rather, they're made of metal and polycarbonate. 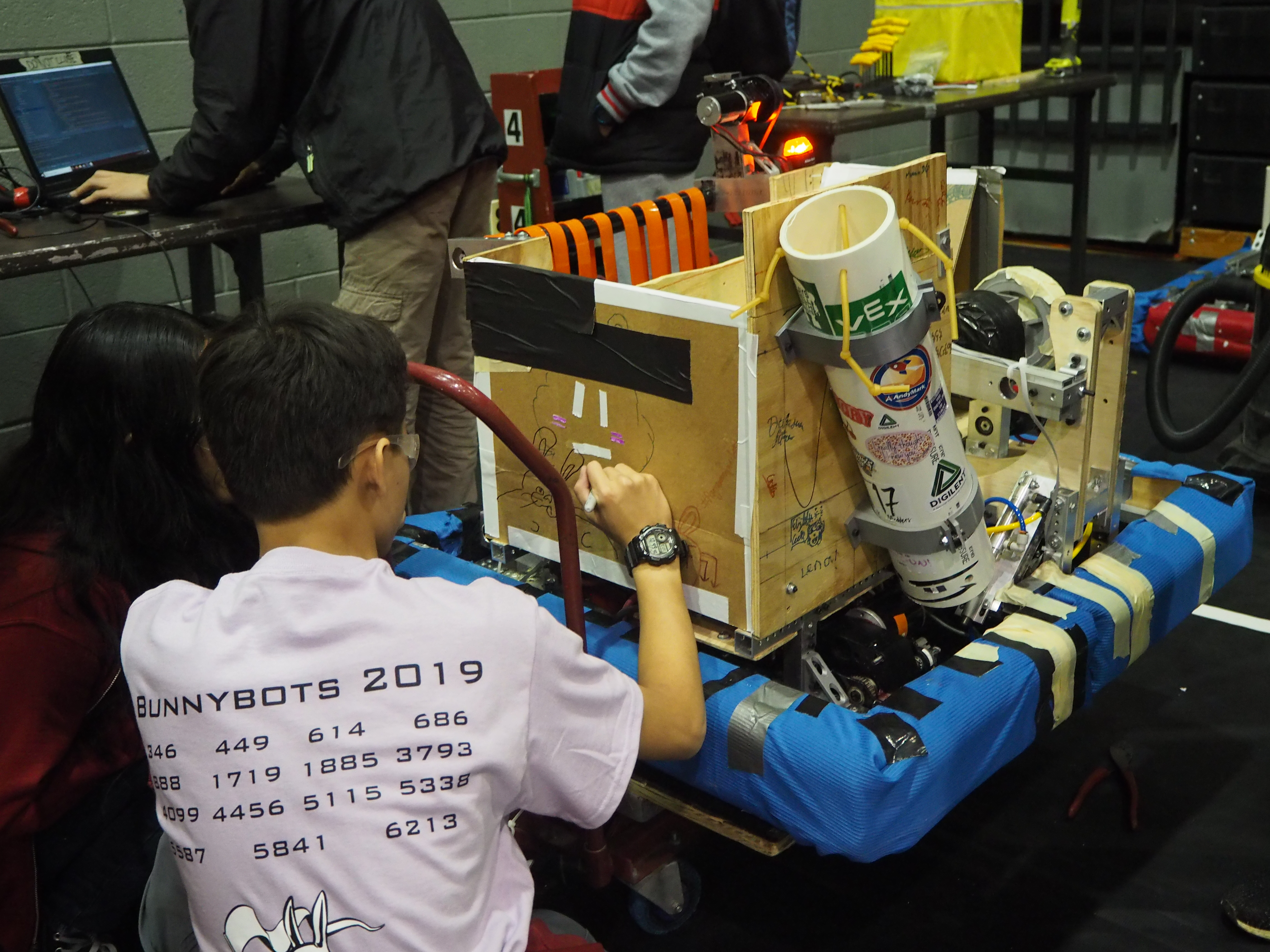 On Sat., Dec. 14, The Blair Robot Project hosted the second annual Bunny Bots competition in Blair's gymnasium. This year's game, "Flying Bunnies," involved building a robot that could collect wiffle balls and bunnies and shoot them into goals of different heights. 15 robotics teams from across the Chesapeake region gathered in the gymnasium with completed robots to participate in the event.

In each match, two robots form an alliance on either side of the arena. The game begins with an autonomous period where the robot must complete tasks without any human interference. Team members then use game controllers to move their robot and collect balls to shoot into three goals on their designated side of the arena. During the endgame, the robots battle to fit into a square in the center of the field to earn additional points for their alliance. 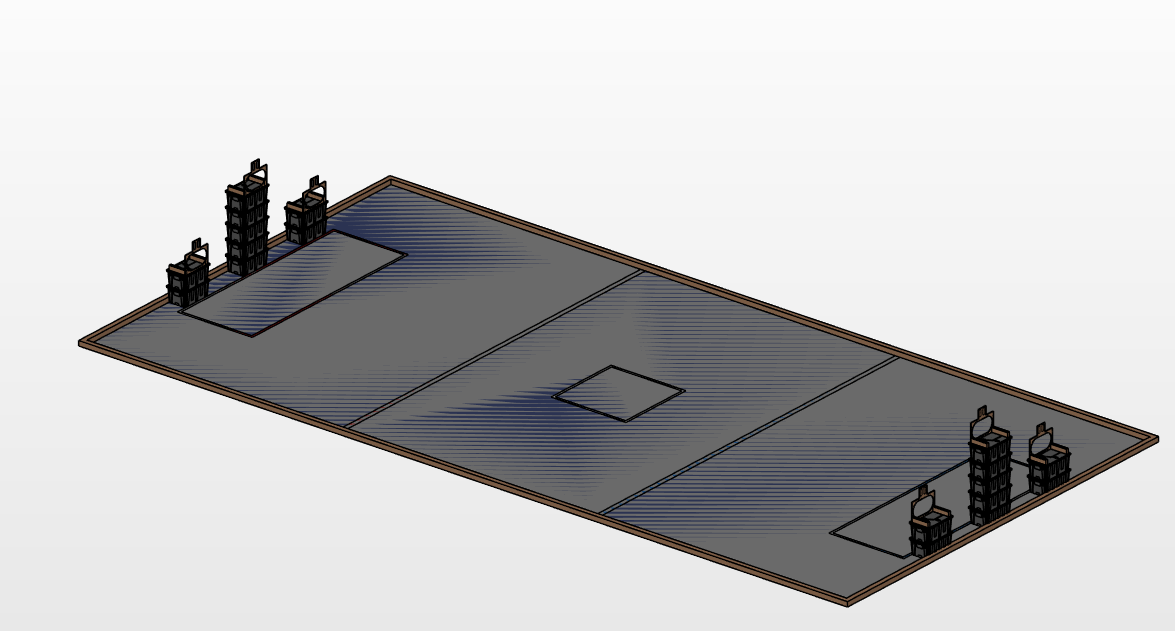 Photo: Model of the arena set up at Bunny Bots, with three goals on either side and a 5' x 5' zone in the middle used for the endgame period (courtesy of Nate Klein).

Photo: Model of the arena set up at Bunny Bots, with three goals on either side and a 5' x 5' zone in the middle used for the endgame period (courtesy of Nate Klein).

The Blair Robot Project participates in the FIRST Robotics Competition (FRC) each year, sponsored by the non-profit For Inspiration and Recognition of Science and Technology (FIRST). Senior Nate Klein, this year's robotics president, explains the mindset behind participating in worldwide robotics competitions. "Through the FIRST Robotics Competition, we want to teach and learn about engineering - all the technical and nontechnical aspects of it. The main goal is to learn," Klein says.

To prepare for the annual competition, the robotics team decided to host a smaller event called Bunny Bots at the beginning of the year to teach new members, affectionately called "rookies," how to plan, build, and compete in a robotics event. "We use it to train new members- it's just a fun way to introduce robotics to the new members and it gives them good experience that's useful during the actual season," Klein says.

Blair's robotics team is divided into four subteams: Mechanics, Programming, Electronics and Business. The leaders and older members of each subteam purposefully step back during Bunny Bots season and let the rookies figure out how to build a functioning robot together, only stepping in to assist and give advice. "We did it as a mock build season. The older members were a lot more hands off in the design process, so the newer leaders could learn how to design and lead and the younger members could learn more about how to machine," Klein says.

To prepare for Bunny Bots, the team begins by discussing the game manual and determining which game strategy to focus on. Then, the subteams further divide into working on specific mechanisms. Blair’s robot, named Claude, has the following components: bunny gun, agitator and drive, intake and shooter. Intake is in charge of picking up balls off the ground and putting them into the robot. The agitator, which acted like a revolving door, rotates and guides balls into the shooter, which would shoot balls out of the robot into the goals. The bunny gun is a cannon-like mechanism that shoots a stuffed bunny into one of the goals.

During the actual competition, each team has four members to control the robot itself, called the Drive Team. Blair had multiple Drive Teams composed of rookies, with freshman Andrew Szabo as one of the rookie coaches who determined strategy and guided the rest of the team. "On the day of the competition I was stressed about where I was going to mess up coaching or tell the drivers to do the wrong thing, [but] it was nice being up there with the robot, trying to figure out what we could do," Szabo says.

Though the mechanisms all came together at the event itself, Claude failed to complete necessary tasks because of the time crunch the team faced. The team struggled to meet the deadlines they had put in place before build season, leaving Programming with little time to finalize the code that enabled mechanisms to execute their given tasks. "For our team as a whole, we can work on planning and actually meeting deadlines, and not finishing anything two weeks late… We didn't quite give Programming enough time," Szabo says.

Klein confirms that the team would focus and improve their time management for this year's FRC challenge. "We're going to debrief what went wrong, and make sure we find the balance between letting the rookies and the new leaders work and intervening a little to show them the ropes," he says. Regardless of the technical difficulties at Bunny Bots, the rookies maintained a positive attitude throughout the competition. "I was proud that we did get something on the field… but Bunny Bots should continue happening because it's a great way to learn so I'm ready for build season; I feel helpful to the team," Szabo says.