The "green" team goes to playoffs

When Blair's mock trial club started holding meetings last October, it had a long way to go to become competition-ready. All but three members of the 12 person team were new to the club and only four had taken or were currently taking a law class. And yet, the novice team has come further in the past two months of competitions than any recent Blair team, qualifying for the playoffs and outperforming higher-seeded Blake before falling to Churchill last Tuesday, March 11.
"This is the best we've ever done, which is so interesting because this is the youngest, greenest, least experienced team I have ever had," club sponsor Stefanie Weldon says. "I'm so proud of these folks because they are without a doubt the greenest team I have ever coached and they are just so good." 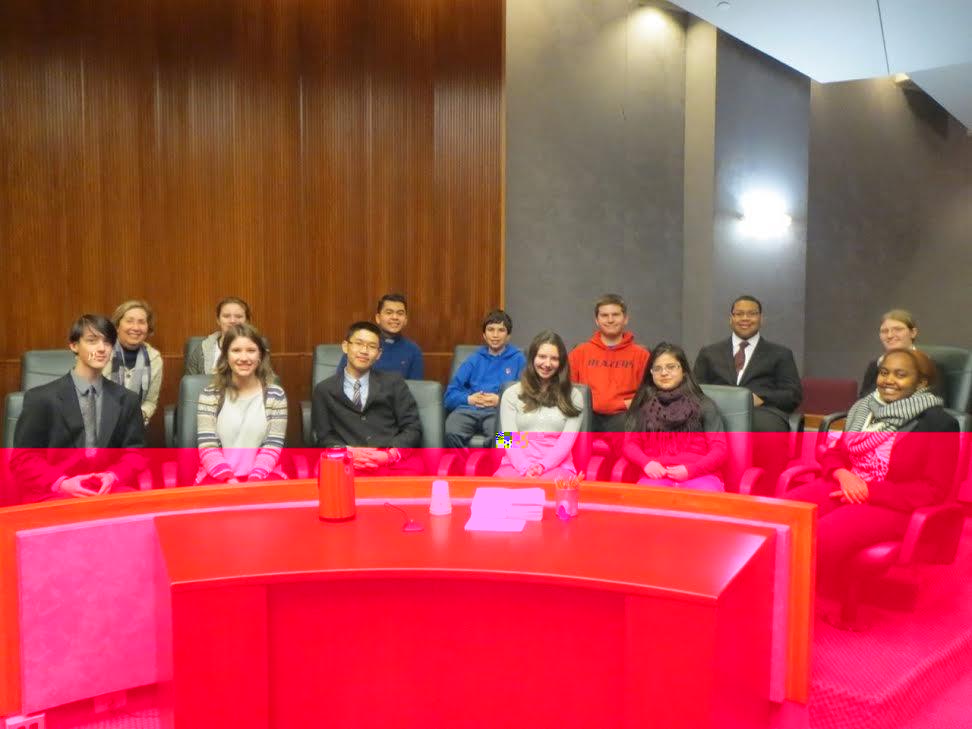 The club completed February's round robin tournament, a one-trial-a-week event in which each half of the team – the defense and the prosecution – compete twice, with a record of 2-2. The score qualified them to move on to the playoffs for the first time in years. They faced Blake on March 6 and Churchill on the eleventh.

Process and preparation
The club started the year by holding tryouts to determine each person's role on the team. "I was looking for somebody who could be aggressive, who knew how to look people in the eye," Weldon says. The early meetings focused on learning the rules of the court that keep the mock trials true to life, like the structure of a trial and how to properly submit evidence, then accelerated during exam week to prepare for the round robin. The club met for hours every day during exam week to run the trials with the plaintiff and defense teams squaring off against each other. "It's the first time that we get to see what the two sides look like, and kids actually get to cross exam the other side," Weldon says. "[It also] helps the witnesses really get in to their characters." Then the club jumped in to the first part of the competition, the round robin, competing in a trial a week in a real court room at the Montgomery County Judicial Center with an actual trial lawyer presiding as judge. Blair's team was competitive enough to move on to the playoffs with 15 other teams from the county. Teams that advance through the playoffs will continue to a regional tournament against students from other counties.

Keeping it real
In addition to keeping with the rules of court, the mock trial competitions get an extra dash of realism from the subjects of the cases. "The Maryland Bar people [who write the case books] like to use cases that are ripped from the headlines," Weldon says. Last year's clubs competed with a dog fighting case that drew from 2007's Michael Vick investigation and the current controversy over whether pit bulls are inherently dangerous dogs. This year's case calls attention to a type of law somewhat unique to Maryland. "In Maryland, we have something called contributory negligence. We're one of the last ten states in the country that have this rule; the other states have something called comparative negligence," Weldon says. The mock case involves a star lacrosse player who attends a concert, moshes and body surfs, fights with security guards, is injured and becomes a quadriplegic for life. In a comparative negligence state, any actions on the part of the plaintiff that could have contributed to his injury might lessen the penalty for the defendants. In Maryland, any negligence on the plaintiff's part gets the defendant completely off the hook. "Defense lawyers love contributory negligence," Weldon says.

Though they are very accurate simulations of real cases, mock trial cases differ from real ones in that they have to be balanced. The facts, the witnesses and other aspects of the case have to be open to interpretation from different viewpoints so that both sides have a fair chance at winning. "They have to be fiddled with to make it into a learning opportunity that's within the 12 person team and is winnable by both sides," Weldon says.

Marks of a strong team
Mock trial teams take such balanced cases and formulate a theory that they believe they can prove to the judge. But while the quality of the argument is important to winning a trial, the club's job doesn't stop there. "Being a good speaker and articulating your arguments well is maybe half the battle," plaintiff team leader and sophomore Eleanor Harris says. For a lawyer, a winning presentation draws on confident public speaking combined with a sense of drama. Weldon, who has been an actor since starring in productions as a student at Blair, works with the lawyers on bringing drama to the courtroom. "Trial work is acting, so is teaching," Weldon says. "You can feel when you've got your audience and when you don't, and so much of it has to do with your body language, with your voice, with your eye contact and your self-confidence." Knowledge of "courtroom etiquette" also scores with the judges. "One thing that I learned is that being kind is a really big deal. Being rude doesn't work well with a judge," defense witness and junior Eunice Muchemi says.

According to Weldon, a strong lawyer also has a firm grasp of the rules of court. She points to Harris to illustrate the skills lawyers draw on during mock trials. "She's very strong, she's very articulate. She knows the rules and when she makes objections, and she's very aggressive in her objecting, she knows what the rules are supposed to be," she explains. The lawyers also have to be able to think on their feet constantly, Weldon says, using the closing statement as an example because it has to reflect the other side's argument and therefore can't be prepared in advance. "You have to be not only very spontaneous but eloquent in your spontaneity. You've got to be really aware of what has been going on for the past hour and a quarter."

For witnesses, acting is even more important. Witnesses receive a grade on the team's score sheet that assesses their performance and if they were believable as their character. For the judges, convincing acting is a sign of preparation. Often, a challenge for the witnesses is coming off as older than they are. "In my case I'm 48 years old, which is different," Muchemi says. "At one point, my lawyer asked me to demonstrate what head banging is. I couldn't just do it and sit down, I had to make it seem real, like 'oh, I'm sorry, I'm so old and I'm a bit dizzy' and all that. Just have fun with the person."

Looking ahead
Now that the competitions are over for the club, the team members are taking time off for the rest of the year. "It's been a really intense month so most people are ready to take a break," Harris says. Next year, social studies teacher Jennifer back will take over the club sponsorship as Weldon is retiring. "I'm thrilled to be leaving this very young team to Ms. Bach because I'm retiring at the end of this year. I'm glad to be able to leave them with somebody who's both experienced and has been working with us all along," Weldon says. "I know I'm leaving the team in very good hands."