During COVID-19, the orchestra live-streams its concerts to viewers for free

Due to COVID-19 restrictions, the National Philharmonic decided to live stream all concerts to viewers watching from home for the entirety of the 2020-2021 season. Every other Sunday starting from Oct. 25, the renowned orchestra will play at the Strathmore Music Center, while their performances are broadcasted for free to Youtube, Vimeo, Facebook, and the National Philharmonic website. 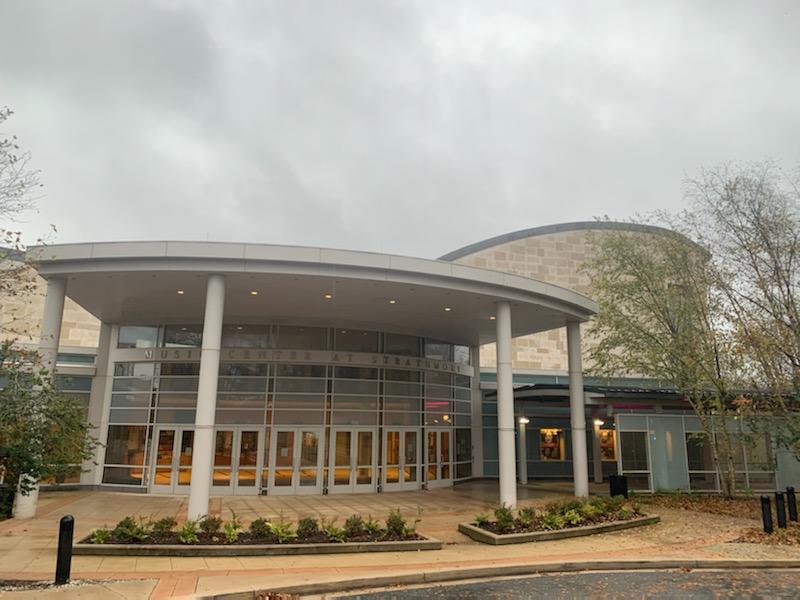 Photo: The National Philharmonic livestreams their performances from Strathmore Music Center every other Sunday to virtual audiences (courtesy of Ethan Zajic)

Unlike many other professional orchestras who have had to cancel their 2020-2021 season (including the New York Philharmonic and Chicago Symphony Orchestras), the National Philharmonic is working under social distancing regulations.

The season started on Sunday, Oct. 25 with a celebration of a few of Beethoven’s earlier works. The performance, named the “Beethoven @ 250 Birthday Bash,” marked Beethoven’s 250th birthday. Led by conductor Piotr Gajewski, the National Philharmonic delivered a remarkable performance that astounded the audience even through a computer screen.

The program started with Romance for Violin and Orchestra No. 1 in G Major, Op. 40, one of Beethoven’s first claims to fame in music composition. The piece was performed by soloist Nurit Bar-Josef, concertmaster of the National Symphony Orchestra, who is known for her passionate work as one of the U.S.’s youngest concertmasters. She performed the piece with a solid and well-rounded style, never too overbearing in her passion. In places where she could have been more intense, she didn’t go overboard, instead slightly hinting at it while keeping her movements and passion under control.

Romance for Violin and Orchestra No. 2 in F Major, Op. 50 followed, performed by Jonathan Carney, concertmaster of the Baltimore Symphony Orchestra. Romance in F Major is well known for being one of the hardest Beethoven romances to play — the soloist must channel their own intensity and freedom into the piece, but stay strictly in coordination with the rest of the orchestra to achieve the full effect that Beethoven intended.

Carney played the romance with overwhelming passion, which could be heard in his playing and seen in his movements as well. Still, he was able to carefully flow in and out of tempo, never seeming to be uncoordinated with the rest of the orchestra. His performance conveyed a sense of confidence, and a feeling of reassurement that is only achieved with decades of practice.

Before finishing the program with Beethoven’s Symphony No. 1 in C Major, Op. 21, Gajewski took a moment to explain the genius of the piece. He walked the audience through the opening to each movement, showing how Beethoven broke each of the previously established rules for symphony composition. “Beethoven would go on to re-invent the symphony form with almost every new attempt… but it all began with this -- Symphony No. 1,” Gajewski concluded, tying up his explanation before leading the orchestra in an impressive finale.

Gajewski’s explanations about Symphony No. 1 allowed the audience to enjoy the individuality of Beethoven’s compositions, and kindled a special connection between conductor, orchestra and audience.

The orchestra itself maintained social distancing, with only a few members from each instrumental section performing in the concert. Still, they managed to bring some artistic flair to the performance, which could be seen and felt even through the screen. Performers wore custom sparkled National Philharmonic masks, and each music stand was adorned with a bouquet of bright flowers.

Throughout the entirety of the livestream, viewers showered the Youtube live chat with praise, remarking on the soloists’ performances and thanking performers for persevering during these tough times. Viewers felt as if they were part of the orchestra themselves, seeing performers up close through the numerous camera angles, which added to the intimacy of the performance.

Despite not being able to perform in person, the National Philharmonic has managed to continue their tradition of delivering top-notch concerts, and will indubitably continue to do so throughout the rest of the season.

The National Philharmonic’s next performance will be on Sunday, Nov. 22 at 2 p.m. The 2020-2021 season information can be found at https://nationalphilharmonic.org/season/

Katalina Li. Hi there! I'm Katie (she/her). I'm a senior and a co-Editor-in-Chief of SCO! When I'm not writing or editing, I'm usually messing around on my trumpet, drawing Studio Ghibli characters, or making piano covers for my YouTube channel :) More »