Transferring of debt service not allowed

The Maryland State Department of Education may withhold funds from the current MCPS Fiscal Year 2010 budget because the county did not meet maintenance of effort funding requirements (MOE) for this fiscal year, according to Marc Hansen, deputy county attorney for Montgomery County. 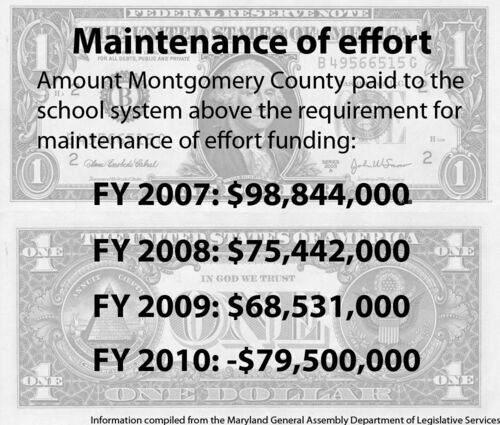 Photo:
In response to a request from the county, Maryland Attorney General Douglas Gansler released a report on Nov. 4 stating that transferring debt service, or the cost of paying back bonds to banks when MCPS borrows money, to the MCPS budget is not a permissible way to meet the MOE requirements. Under Maryland law, MOE funding requirements state that the county must allocate the same amount of money per student each year in the MCPS budget, MCPS Board of Education president Patricia O'Neill said. He recommended that MCPS be fined appropriately. "The opinion said that what Montgomery County had attempted to do was not legal," said Raquel Guillory, director of communications for the Attorney General's office. According to O'Neill, even though the county was not able to meet MOE, the proposed fines will hurt the MCPS budget instead of the county's budget.

According to Hansen, Gansler's opinion has started a process of determining how to penalize the county for their lack of MOE funds, which could include fines anywhere from $16 to $64 million to the school system, though the Attorney General himself cannot take legal action. "It has legal significance because the Attorney General represents the state superintendent and state Board of Education," he said. Guillory said that the Attorney General's role in the process ends when he issues his report, but the Maryland State Department of Education can decide whether to take action against the county.

O'Neill said that Superintendent Jerry Weast was initially concerned, however, because the MOE laws mention transfer of debt service as artificial in the eyes of the law since the county has never transferred debt service to the school system in years prior.

However, no party may take action until State Superintendent Nancy Grasmick makes a decision based on Gansler's opinion, according to Hansen. If she decides that the transfer of debt service is not permissible, Hansen said that the county will have 30 days to appeal her decision to the State Board of Education. The county can then appeal the State BOE's decision, if they disagree with it, within 30 days to the Maryland Circuit Court.

The actions began when, in April, Montgomery County determined that the budget was $79 million short of meeting MOE and requested a waiver from the state that would exempt them from meeting MOE funding requirements for one year due to the county's dire economic situation, O'Neill said. The state denied their request because the State BOE determined Montgomery County was not in a different situation than other counties in Maryland, according to Hansen. "[The State BOE] determined that the county had not experienced a significant enough loss in revenue to justify granting the county a waiver," he said.

To compensate for the lack of MOE funds, Hansen said, the county switched responsibility of debt service from their overall budget to the school system budget. Debt service refers to the principal and interest payments on bonds that banks buy from MCPS when the system borrows money for school construction, Hansen said. Although Gansler's report says debt service is not a usable method to meet MOE, Hansen said the county did not foresee a legal problem. "When we made debt service part of the school system budget, we thought it would count, and we still think it should count [toward MOE]," he said. According to Hansen, the word "artificial" in the state statutes were unclear and the county felt their methods did not fall under the category of artificial.

According to O'Neill, the BOE has included proposed changes to the laws in their legislative priorities for the 2010 session Maryland General Assembly because they feel the current MOE legislation is unjust. She said the BOE sees need for change because the fine takes money away from the school system though it is the overall county who cannot meet maintenance of effort. Although the assembly will not have their first meeting until January, O'Neill said that a change in law may still be able to protect the school system's budget for the current school year. "If we're fined, then the legislature [can enact] a law that no fines be assessed for Fiscal Year 2010 penalties," she said.