Montgomery Blair Players to perform "The Merry Wives of Windsor"

Shakespearean play to be the Blair Players' first 2009 adaptation

Blair's theater program began rehearsals for the 2009 fall play "The Merry Wives of Windsor" last Tuesday. Directed by drama teacher Kelly O'Connor, the play will feature additional scenes in order to incorporate as many Blazers as possible; as a result, the production will feature more performers than those of years past.

In addition to the play's original plot, O'Connor plans to incorporate versions of William Shakespeare, the Lord Chamberlain's Men and Queen Elizabeth into her adaptation. In this adaptation, Shakespeare presents a hurriedly-written "The Merry Wives of Windsor" to the Queen at Windsor Castle. Humor and chaos ensue as the company tries to keep the play afloat and characters such as the Queen and her ladies-in-waiting are involved as well. 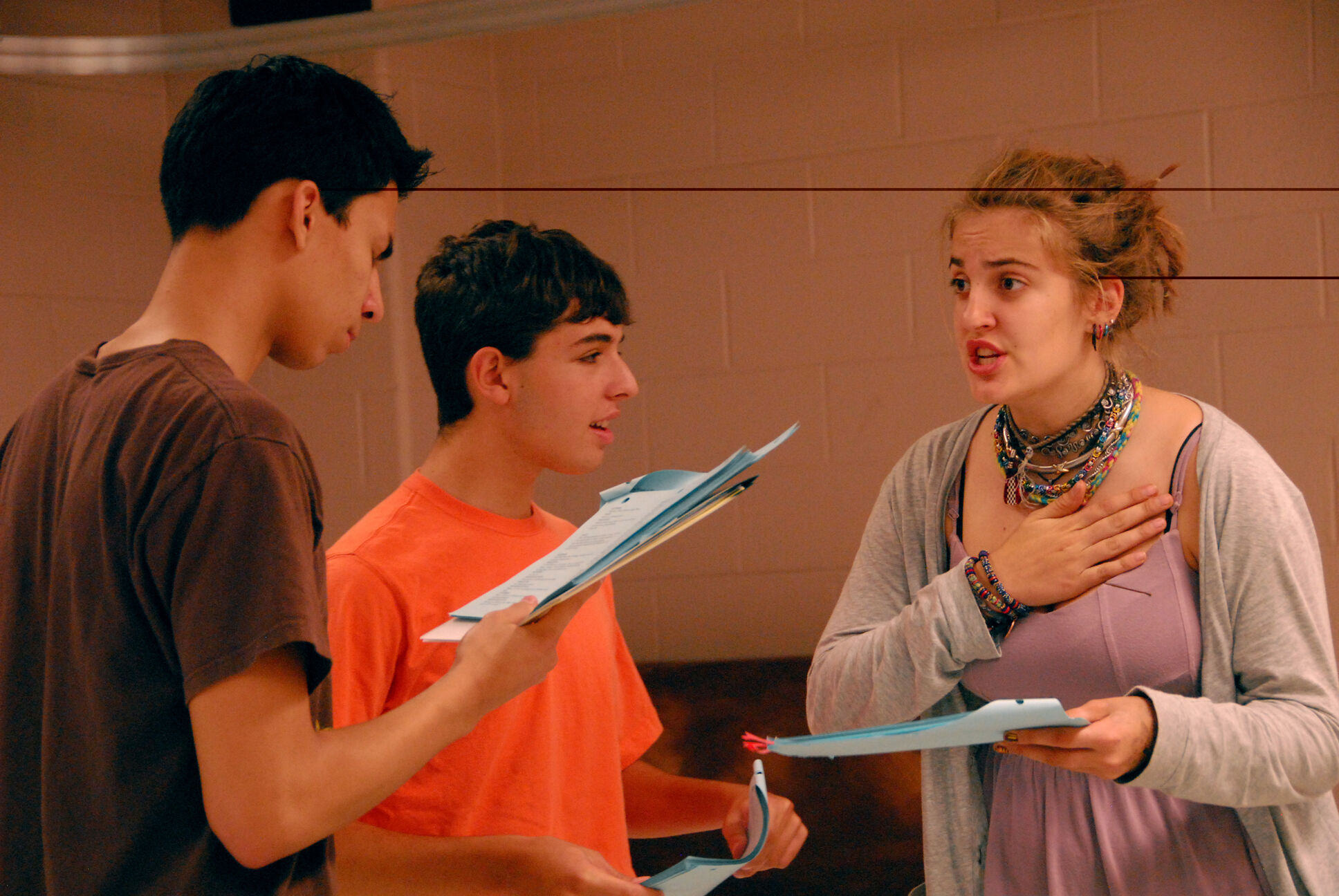 Photo: Jonathan Guzman, Eli Okun and Xorissa Rabitz practice their scenes together under the direction of Kelly O'Connor.

Photo: Jonathan Guzman, Eli Okun and Xorissa Rabitz practice their scenes together under the direction of Kelly O'Connor.

"The Merry Wives of Windsor" is the only Shakespearean play set in the contemporary Elizabethan time. The plot centers on haughty Sir John Falstaff, played by female sophomore Claire Koeing, who is stripped of luck and money. "I love Falstaff. I think that his blinding arrogance and rough sense of humor are hilarious, and in a way sort of endearing," Koeing said."You gotta feel sorry for the fat guy who gets pushed around in the story, even if he is a bit of a jerk in the beginning."

Although the play has only 21 original speaking roles, O'Connor wanted to provide more Blazers with the opportunity to perform. She decided to add 10 roles to the play, as well as new scenes that will add to the central part of the play. Due to the number of gifted actors who auditioned, "The Merry Wives of Windsor" will feature a larger cast than past Blair Shakespearean productions. "I want to get everyone involved. There is so much talent," O'Connor said.

John O'Connor, Kelly O'Connor's husband, wrote additional scenes including Shakespeare and Queen Elizabeth characters in order to involve a larger cast in the production. "I wrote in a new section mainly to create speaking roles for a number of very good actors who had not been cast as one of the characters in Shakespeare's play," John O'Connor said. "It always happens that a hugely talented group of people turns out to audition for the play."

Senior Tina Munoz-Pandya, who had a leading role in the 2009 spring musical "Sweeney Todd" as Johanna, will play Bardolph and choreograph the play's two dance numbers, a jig and a revised version of Michael Jackson's "Thriller." "Though I don't have too many lines, I hope to add to the play as much as I can," Munoz-Pandya said."I'm also in charge of choreography for the show, which I think will add a whole new dimension to everything."

While the play is difficult to perform, O'Connor wants to challenge the Blair Players. "There is only one professional version in production," she said. Another obstacle that several female actors have to overcome is being able to act as male characters in the show. O'Connor estimated that 60 percent of people who auditioned were girls, although the majority of roles are male.

Blair's theater, which produced "A Comedy of Errors" in 2007, has a tradition of performing a Shakespearean play every other year. O'Connor, who obtained a Ph.D. in Shakespeare studies at the Shakespeare Institute, is an avid fan of Shakespearean works. "I always love to do Shakespeare," O'Connor said.

O'Connor, who has been directing Blair shows for 12 years, is looking forward to working with the Blair Players. "It's thrilling to watch the kids perform on stage," O'Connor said.