The Council explores a potential tax on sweetened drinks

Montgomery County Council Vice President Hans Riemer (D) and co-member Tom Hucker (D-20) have discussed the possibility of a tax on sweetened beverages. According to other Council members, Riemer and Huckers suggested the idea as a way to raise money for early education programs for students. "I think we need to explore a variety of options to fund early childhood and afterschool programming," Riemer told Bethesda Magazine.

Riemer confirmed that he had met with Leah Marcus, a member of Bloomberg Philanthropies who has headed efforts to implement soda taxes in many US cities. Hucker said he has also met with advocates for a beverage tax, but only to discuss its benefits. Neither has explicitly expressed support or opposition to the tax. 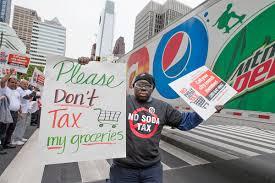 Photo:
The possibility of a soda tax doesn't originate in Montgomery County, or even in Maryland. Several cities and counties across the US have recently considered placing a tax on sweetened beverages. Berkeley, Calif. is one city that has implemented a soda tax in 2014, which took effect March 2015. Since then, sugar-sweetened drinks decreased by "nearly 10 percent during the first year of the tax, which raised $1.4 million for child nutrition and community health programs," according to Reuters. Philadelphia garnered national attention for its beverage tax, went into effect on Jan. 1 of this year.

Once Philadelphia's soda tax was implemented, some went out of their way to avoid the tax by either avoiding soda or purchasing it in another city. Though usually unpopular, soda taxes can have economic benefits. In August, according to the Philadelphia Inquirer, the soda levy generated "$39.3 million in its first six months." This figure falls short of the "$42.6 million city officials had initially projected, but just short of the revised $39.7 million it announced in June." In the same article by the Inquirer Catalina, a digital-marketing firm based in Florida, investigated how much the tax is affecting consumers and soda sales and found information came to a conclusion that explained the revenue shortage. They released a report that concluded "many shoppers are now traveling outside the city to buy their sweetened beverages."

Howard County has also introduced restrictions on sweetened beverages. In 2014, Howard County passed the Maryland Healthy Eating and Physical Activity in Childcare Act, which requires childcare facilities, including schools, daycares and hospitals, to only serve drinks without added sweeteners to children and to mothers who are breastfeeding. These standards are based on the Healthy Child Care program. This March, NPR reported that as a result of the Unsweetened campaign, Howard County experienced "a 20 percent decrease in sales of soda and a 15 percent decline in fruit drink sales between January 2013 and December 2015."

The situations in Philadelphia and Howard County may occur in Montgomery County. The County Council has yet to vote on a proposed soda tax bill.