Bill would set an 11 pm curfew on weekdays, 12 am on weekends for youth

On July 26, the Montgomery County Council held a hearing on Expedited Bill 25-11, also known as the Curfew Bill. Council President Valerie Ervin, on behalf of County Executive Isiah Leggett, proposed the bill that would give minors under the age of 18 a curfew of 11 p.m. on weekdays and 12 a.m. on weekends. This curfew would last until 5 a.m. The purpose of the bill was to target juvenile crimes that are related with gang violence in Montgomery County. 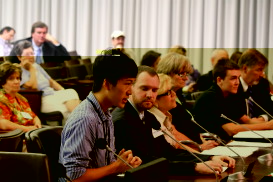 Photo: Current Student Member of the Board Alan Xie speaks at the curfew bill's public hearing.

Photo: Current Student Member of the Board Alan Xie speaks at the curfew bill's public hearing.

Many county residents came to voice their opinions at the hearing. There were citizens who both supported and opposed the bill. Both sides presented their arguments to the council, at times more bluntly than others.

Testifiers on both sides urged the council to take action against local gang violence. Many of the testifiers cited a stabbing that took place in Downtown Silver Spring on the Fourth of July weekend, the incident that sparked the bill's proposal. Many of the bill's supporters were concerned about gang activity and violence, such as vandalism of private property and loitering, and how they impact the safety of Montgomery County youth. They also stressed the need to protect teens from engaging in any type of criminal behaviors.

Testifiers that opposed the bill citied the lack of evidence thereof, and strictly pointed out the present curfews put in place has no effect on local crime rates. Alan Xie, current Student Member of the Board of Education, cited an 18-year long study performed by sociologist Michael Males at the University of California. This study found no statistically significant correlation between increased curfew enforcement and decreased juvenile crime. Another point made in opposition of the bill is its failure to address the fact that most juvenile crimes occur during the day. A study conducted by the Office of Juvenile Justice and Delinquency Prevention shows that on nonschool days incidences of juvenile violence increase through the afternoon and early evening hours, peaking between 7 p.m. and 9 p.m.

The majority of people that came to testify at these hearings were over the age of 18, mainly parents and community activists. Colleen Kelly, a Montgomery County resident and a parent, voiced her concerns about the bill infringing on her parental rights. "When my son texts me at midnight, I want to be able to give him that permission if I believe it is safe to do so," Kelly said. "If Expedited Bill 25-11 passes in its current form, you will be taking these parental choices away from me."

Both sides addressed and supported the same resolution, that gang violence is an issue and that it needs to be tackled. But after the hearing, there were many more testimonies opposing the bill than there were in favor. Ervin voiced her concerns regarding the lack of evidence in favor of the bill. "Clearly there are issues related to violence and crime…[but] I don't think they laid out case pretty well,” Ervin said.

Since the initial introduction of this bill, there has been an uproar on social media networks such as Facebook and local political blogs. A day after the initial introduction of the bill, a Facebook group was created by Abigail Burman along with Alan Xie, called "Stand Up to the MoCo Youth Curfew!” to encourage students to testify or attend the bill's hearing. More than 5,000 students signed up to go to the event. At the hearing there were about 20 students. Xie addressed the low representation of students by stating, "I regret to inform you that the 5,000 members of our party are currently occupied with their respective summer programs, internships and jobs, and will be unable to attend today's hearing.”

Students were not the only one's utilizing social networks, Councilmember Hans Reimer tweeted, "Why stop with a curfew? Why not just make MCPS a boarding school? The only argument for a curfew I have seen is to keep kids from DC and PG out, since they have curfews there. Seems awful unfair to our own.”