Montgomery County is one of two Maryland counties whose minority population became the majority this year, according to the national census released in early February. The minority share increased substantially in the last decade, leaping 10.2 percentage points from the 2000 census. 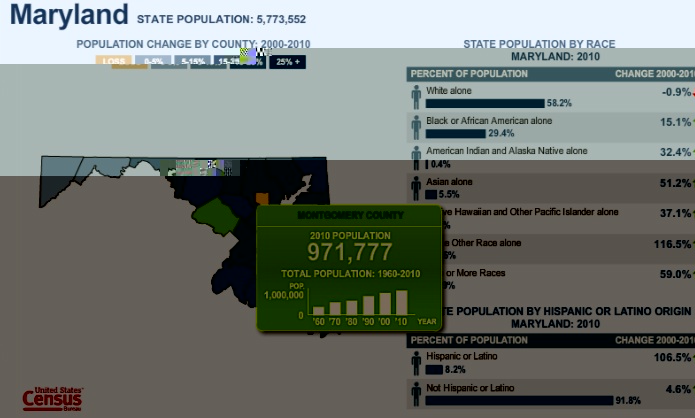 Photo: Montgomery County was one of two Maryland counties to become "majority-minority," according to the 2010 census.

Photo: Montgomery County was one of two Maryland counties to become "majority-minority," according to the 2010 census.  Photo courtesy of planning.maryland.gov.

The Maryland Department of Planning (MDP) attributed this change to the growth in the Hispanic, Asian and African-American populations throughout the county, as well as the 7.8 total percent drop in the white population. The county now has slightly more than 970,000 residents, of which 47.5 percent are Hispanic, Asian or African-American. A multiethnic population makes up the other 3.2 percent of the minority share.

Montgomery County's total growth rate was the largest in the state at 11.3 percent, almost a full two points higher than the national rate. According to Montgomery County Council President Valerie Ervin (D-5), the county's switch was significant, though not entirely unexpected due to demographic and enrollment projections from previous years.

The census results will affect the proposal to determine the redrawing of the five Maryland districts, which will be submitted next October. "The redistricting rules state that the population cannot vary between districts by more than 10 percent after the new districts are designated," Ervin said. "The districts…that grew faster than others will likely have their area reduced to balance out representation." According to Ervin, as the county grows more diverse, so will state and local representatives.

Furthermore, the growth in population has encouraged the county to continue building and developing its public services. According to Ervin, the County Council will take up master and sector plans in the coming years, as well as a County Housing Policy. Transit projects are also under construction, such as the Purple Line, Corridor Cities Transitway (CCT) and Bus Rapid Transit (BRT). "If we do not plan for future housing and employment, Montgomery County may lose its competitive advantage to other counties in the region," Ervin said.

Though the Maryland growth rate will continue to fluctuate depending on the state and national economy, future developments such as the balancing of the districts should ensure stability for the time being. "The county provides an array of services that reach the various segments of our population," Ervin said. "[It] will continue to serve and represent our population, no matter the composition."

Overall, Maryland's percent change was the smallest it has been since the 1970 census and ranked 24th in comparison to the rest of the country, according to the MDP. Charles County was the only other Maryland jurisdiction to become "minority-majority;" the census stated that Prince George's, Baltimore and Anne Arundel counties also experienced a considerable total population change.